This challenge was received via Twitter.  It has leapt to the top of the list because of its topicality. 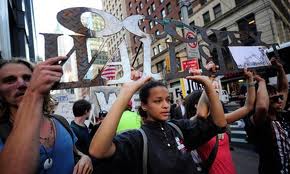 Most Europeans are wary of American politics and I am no different.   The excessive use of religion and patriotism by American politicians is usually viewed with distaste this side of the Atlantic.   The anti-authority working class right wing attitudes that have transformed once left-wing States like Oklohama into Republican strongholds only bewilder non-Americans.  And some Americans too,  in ‘A Mirror in the Roadway’ Morris Dickstein gives a surprising account of the popularity of left wing politics in ruralAmericaprior to the Second World War.

These days though it is different.  My Twitter account is becoming increasingly dominated by stern chaps who describe themselves as Christians, Conservatives and Patriots.  Notice it is always with capitals.   These photographs of gymnasium refugees with bullet heads and sunglasses communicate neither Christian compassion nor the democratic inclusiveness that was at the heart of Christianity.   Not that theoligical integrity interests them

One of the more unpleasant examples asks, ‘Do I scare you?’

The answer is no.   The rage is too obvious and ubiquitous for it to frighten.  These guys have been around for too long to scare anyone.

The general assumption is that Elvis was right wing.  Well, he was definitely a Christian and a patriot and, of course, there are the infamous photographs with Nixon. 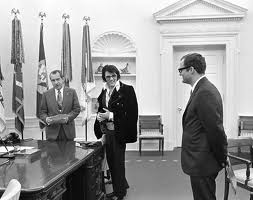 If he had lived to witness the events on Wall Street it is more than possible he would have disapproved of Occupy Wall Street, especially if he had Parker trained Joe Esposito whispering in his ear that the protesters were anti-American.   But if Elvis was pro-American his attitude to the elite was always more suspicious than deferential.  Peter Guralnick in his biography of Sam Cooke quotes Larry Geller remembering Elvis believing that Cooke was a victim of an establishment conspiracy.  Elvis also sang the Joe South hit ‘Walk A Mile In My Shoes’ which could serve as a very decent anthem for the protests that are happening in Wall Street.  He not only performed the song but introduced it with a quote from the Hank Williams composition, ‘Men With Broken Hearts’.  Elvis may not have believed in socialism as an economic alternative to American capitalism and he may have been hostile to non-American ideas but his heart was with the underdog.   He was generous with his gifts and these were made mainly to friends but occasionally he included strangers.  These strangers were invariably poor.

The world has usually been run by the rich and the powerful for the benefit of themselves.   Every so often, though, a generation gets wise, when the young and the dubious say, ‘We don’t believe you.’  It requires uncertainty, a sudden spotlight on something that is impossible to defend and the elite whose excessive power and privilege has made them all too willing to brush aside reasonable concerns.  It is happening now, it happened in the sixties and it happened in a more subtle way in the fifties.  Now the young are asking why it is that these few people need so much and why are these gluttinous few willing to cause so much suffering to so many to grab wealth that most of us consider obscene.  We may not all want to occupy Wall Street but the decent amongst us know excessive reward and greed would only distort our lives.  In the sixties the young asked different questions.  They were less accusatory of the greed of the wealthy but more demanding for the neglected and the poor, especially the oppressed minorities.  The clash in the fifties was less political and economic.  Most people were settling down to the improved times that followed the Second World War.  Protest, though, still existed.  All three generations shared scorn for the self-serving who throughout raged that the poor should work hard and know their place.    For all his shortcomings, Elvis led the fifties reaction and his style and music delivered unanswerable contempt to those who told him he should be quiet and remember his race.

This leads us to the reaction of those who oppose the Occupy Wall Street demonstrators.  I can only share my perspective but it seems to me that none of the critics are interested in what the protestors are actually saying.  Admittedly, we have some who claim that the protestors have no opinions to articulate but this is not the main complaint.   No, what offends the critics of what has been a peaceful protest is the offence against order.  This offence is enough to condemn them.  Protest in itself is wrong.  The financial elite exist but are beyond criticism.  Well, here is a little.  There are individuals who can earn earn more in a minute than the average American is paid in a lifetime.  The present elite that share our world have not only brought the world economy to its knees but ignored the period of enlightenment that existed after 1945.  This they have done because it suited their bank accounts.   But we are told by these strange men in sunglasses who want to scare us that we must not protest.  Whatever suits the elite must, according to these characters, by definition be pro-American.  Our betters must be left to be unfettered by conscience and Christian charity.

No doubt I am romantic but I like to think that I would be able to persuade my rebellious fifties rock and roll heroes of this simple truth.

Lying down in deference to the elite simply because they have more money is not patriotic.

It is submissive and timid.  More important is what the macho supposedly Christian warriors fail to notice.  It is emasculating.  Only the faint hearted can assume that the status quo is always right and that this status quo somehow will always represent the interests of ordinary people.  It does not when the economic system is collapsing and money is being directed from the poor to the rich.

It is no surprise that these characters ask, ‘Do I scare you?’  Being scared is what they understand best of all because behind their sunglasses and scowls they are terrified.  This is what makes them constant.  Their terror has been around since 1950 and well before.  There were terrified of Elvis and his ‘nigra ways’ in 1956, terrified of social and sexual freedom in the sixties and they are now terrified of this latest challenge to hierarchy.   The world has moved on since Elvis and it is more than likely he would have been confused by the attitudes of Occupy Wall Street but he never shared the timidity and the deference of their critics.   He was not intimidated by order and his betters which was why he really was scary.  This is maybe why later he could afford to relax and let his music become concerned with the consequence of sensitivity.  These pumped up phonies who preach hatred merely rally around order.  They have no interest in the suffering.  Don’t expect a free Cadillac off any of them.