The name alone tests belief, makes us wonder what happens in the mansions of our rulers.  Johnny Cash was right to invoke our

sympathy for ‘A Boy Named Sue’ but even Johnny failed to imagine the double whammy inherited by the Minister for the Cabinet Office.   Even if most of it was spent at £10,000 a term Abingdon School, Francis or Maude must have had a complicated childhood.  Maybe somebody assumed his names would toughen him and anticipated Francis or Maude battling the school rugger team, similar to what happened to Sue in the Johnny Cash song.   David Cameron understands public school privations as well as anyone although his schooling was only at the charity institution Eton College where as many as thirty boys (whose noses presumably point sideways) do not pay any fees at all.  Cameron probably concluded that the harsh existence of Francis or Maude made him favourite to deal with the civil contingencies his policies would create.   Cameron told the others, ‘When the going gets tough you find a man called Sue or Francis or Maude.’

These are cheap jibes, I know, but the history of satire and politics in Britain up till now has been simple and crude.   When the programme, ‘That Was The Week That Was’, first appeared on TV the satirists were content to giggle at the absurdities of politicians.   They accused them of not being very bright and not much more.  Fifty years ago, though, politicians had tried to

appeal to as many voters as possible.  The political parties lined up on the left and the right because that is where politicians were supposed to be.   They represented themselves, the powerful and sometimes even the powerless but whatever their bias they assumed some responsibility to everyone.  Difficult issues that divided the nation were referred to cross party committees and parliamentary commissions.   Consensus was considered desirable.   These courtesies were shattered in the sixties by trenchant and rebellious teenagers.  An absence of manners and an unwillingness to compromise led eventually to a much more abrasive revolutionary champion.  She was called Margaret Thatcher.   Not quite what the left expected but there is a history of unintended consequences and the young of the sixties were always casual about history.   As politics changed so did the satire.   The gentle

reminders of ‘That Was The Week That Was’ were replaced by the savage insults of ‘Spitting Image’.   There is a cliché, long unfashionable, that a nation gets the government it deserves.   The same can be said of politicians and satire.   They started the nastiness so they should not be surprised that they are now held to account through foul mouthed ridicule.   Thatcher probably relished such attention, was happy to bathe in a fame that left its stain.   She liked it rough and tough and the head butting puppet of ‘Spitting’ defined her well.

Nobody, though, could have anticipated what followed.  Now the politicians satirise themselves before the satirists.    When did this phenomenon begin?  Was it Tony Blair walking across Camp David, a man with too many teeth wearing too tight trousers and pretending to be a cowboy?   It could have been the palpably false break in the

voice when he announced the news about Princess Diana.  Actually, there are too many Tony Blair moments for anyone to say.   Nor should we forget Thatcher on the tank, wearing goggles and wrapped inside freshly laundered white linen.  The moment we saw a crazed woman pretending to be Lawrence of Arabia, Boadicea and John Wayne (take your pick), a nightmare filtered through shimmering desert heat.  The unthinkable had happened.  The politicians were now more terrifying than the puppets on ‘Spitting Image’.

Francis Maude should not be in this company.  He is too like the quiet bloke in those sinister ensemble scenes that occur in a

Shakespeare play.   Maude is the gang member whom we imagine saying something like, ‘Perhaps Richard we should count to ten.’    His ability to look harmless has been his political skill.   He can talk about vindictive social engineering and pretend it is logical and essential.   They all do it, of course, but Maude sounds as if he actually believes it, although forty years of neoliberalism has given him plenty of practice.   Cameron is different, he sounds like he is preparing to sell you an encyclopedia.

Last week, though, Francis or Maude acquired a taste for satire and to describe the absurdity of what happened is beyond me.  Imagine this; a minister says that he had no intention of causing a panic by telling people to fill their car fuel tanks.  He only wanted to remind the British people to take sensible precautions.   This is the same British people who have created a Christmas of such excessive consumption and indulgence that even God has abandoned the festival.  The supermarkets are closed for Christmas Day and the people immediately forfeit their favourite carol and sing ‘Please, please, tell us where we can get our

bread?’  Less than twenty four hours after Francis or Maude had issued his ‘sensible precaution’ garages were putting up signs that said ‘No petrol for sale.’    That’s right; Francis Maude is one of the people who run the country.   What a pity they cannot swap places with the rioters.  We might have effective government and ineffectual riots.    Inevitably, the response has been quick.   One blog talked about a pending tax on sex and an outbreak of panic shagging by the Brits.  I know, I try to keep the blog family friendly but the image is irresistible and, I hate to say, the notion all too plausible.

But everybody makes mistakes and a slip of the tongue can happen to anyone.  Unfortunately, Francis or Maude also came up with the idea that we should store petrol in our garages, later described as ‘sensible topping up’.  ‘We meant a couple of pints, no more.’  One woman, unaware that Francis or Maude was a devotee of Bertholt Brecht, assumed he was serious and the result was that she was taken to hospital with 40% burns.   And if that is not enough to leave you flabbergasted, not only is Francis or Maude still in a job there are Tories claiming that his comments show a brilliant grasp of strategy.   ‘Look how he has put Unite and Len McCluskey on the back foot,’ say some.   Indeed, William Hague is still defending these remarks as practical advice but then the man whose baseball cap was an earlier defining satirical moment has always played his part.

Elvis was surrounded by idiots and it is tempting to line them up and pick a corresponding character.   But maybe the connection is more abstract than that.  This is about the urge of the famous and powerful to be absurd.   The phenomenon of politicians ridiculing 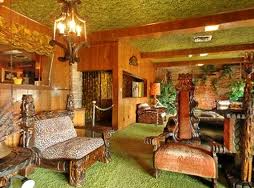 themsleves is mirrored by the descent of Elvis into bizarre and excessive caricature.   Think of Francis or Maude but do not think of the usual Elvis villains – Parker and RCA and so on.   No, remember the white suit and Elvis stoned in the Jungle Room.  It might just give us an idea of what happens to politicians who think their personal whims should define the lives of others.

If you want to read about Elvis and much more click here.