The mystery begins immediately with the very first words in the titles.  What is Spencer Tracy doing in a 76 minute B movie Western?   A clue arrives at the end of the title 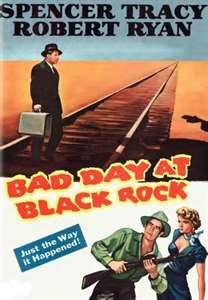 sequence, at the moment that the head on train lets the audience know that their expectations will be pushed aside.  The clue is the name of the producer, Dore Schary.  In the fifties, MGM was concerned about the impact of TV on its receipts.  It responded by bringing in Schary to produce movies that would drag TV viewers into the cinema.  Schary was reputed to be a typically unpleasant cinema mogul.  He was also a liberal activist.   Presumably, he was tempted by the idea of a Western that would protest against racism and the simple faith in pioneer violence.

‘Bad Day At Black Rock’ has been described as classic Hollywood cinema, and it is masterful.  The film can be compared with the enjoyable but much inferior ‘Key Largo’.   In both films, a man returns from the war to meet the relatives of a fallen comrade.  Soon the returning soldier is obliged to defend democracy against the brutal.   In ‘Largo’, though, virtue is obvious.  It exists within the brave hero and the decent ordinary folk who want to protect the Native Americans from the hurricane.   The existence of a downtrodden tribe in the noir film that strongly resembles ‘Black Rock’ is no coincidence.

Within ‘Black Rock’, the tension is brilliantly controlled and the moments of violence are satisfying if not always credible.   But the film is unusual.  Narrative fluency is often ignored and the film ends as it begins with unresolved mysteries.    There is so much that we are left to ponder.   Why does Reno Smith visit LA from time to time and why do the wives only appear in the final shot when McCready finally leaves? 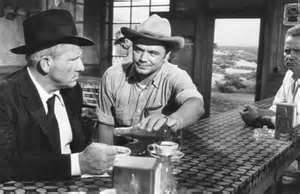 B movies depend on narrative grip and clarity but in ‘Black Rock’ the audience is treated with a contempt normally exhibited by European auteur directors.   McCready has an amputated arm but Tracy walks around looking like a man only pretending that he is one-armed.  Indeed, to ensure that we remain baffled, one of the characters says, ‘Maybe he just holds his hand that way.’   If we think carefully, we realise that Tracy is not an old actor miscast as a de-mobbed soldier but an ex-professional military man.  It is made explicit at the end when Tracy says that he is retired but for most of the film the audience is like the guilty citizens of the town.   It is obliged to puzzle over the odd contradictions of the character that has left the train. Only in the final encounter in the cave when we witness the military expertise of McCready are we persuaded.  In one scene, Doc visits the sheriff who is sitting at his desk and looking at an old photograph.  The sheriff puts the photograph to one side.  We do not see the photograph.  This is not the style of classic Hollywood.  Instead, we have deliberate art house obscurity.  The unexplained is important.   The murder of Liz Wirth is inadequately justified by Reno.   Like an audience for a film by Luc Godard we have to understand how Liz has been misshaped and finally destroyed by violence and masculinity.  If we want sense, we have to think it through.

Most agree that the film is about masculinity, the American West and the world that will follow the defeat of fascism.  The movie is a Western set in the modern age.  It was made in 1955 but the action may have occurred earlier.  It is unlikely that McCready would have waited 10 years to return the medal to Komoko, the Japanese farmer killed by Reno Smith and his lackeys.   McCready, the professional military man whose own violence is governed by a strict code of practice and self-restraint, is the alternative to the impulsive Western hero of adolescent fantasy.    Reno Smith is wrong.  The world has to change and we have to accommodate strangers.  Today, it will appear odd that an ex-army man is used to represent the strength of liberal thinking but in 1955, and before Vietnam and other horrors, the military was viewed differently.  It had won a demanding battle against a fierce enemy and, equally important, had played a key role in helping to create the social democracies demanded by returning warriors.  ‘Black Rock’ is often ambiguous but it is clear on one issue.  The romance of the West has been vanquished by the experience of the Second World War.  The West has to learn from the bureaucratic military. Doc understands which is why he asks for Komoko’s medal at the end of the film.

Inevitably, masculinity is defined through violence.  This is a Western.  Good men are required to be more than passive.   But the contest is not about superior strength.  Doc 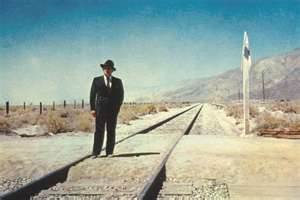 to beat Hector uses unequal weaponry.  McCready survives in the cave through making a Molotov cocktail and reinventing the showdown as a military encounter. ‘Black Rock’ is acknowledged as being anti-Western but it is more subversive than that.  McCready does not believe in heroism.   He wants to run away, not only from Black Rock but also America.  But, despite his intentions, he is the avenger that fate decrees.    McCready will not escape in the funeral hearse as planned.  His wish for death will not be acknowledged.  Instead, he is obliged to meet and defeat Reno.  McCready sets fire to Reno who previously had burnt to death Komoko.  Nobody could have guessed but, not inappropriately, the black suit and trilby of McCready anticipate the priest in ‘The Exorcist’.

Consistent with the unexplained details are the uneven consequences at the end of the film.  The young brother and sister suffer badly.  They are named Wirth so perhaps because of their youth they are more capable.  Liz who initially welcomed McCready is killed without ceremony.  The brother, who has played a key part in helping Reno and his gang to be overcome, is bundled into a police car with no sympathy.   Liberalism is better than violence but the consequences can still be unpredictable. 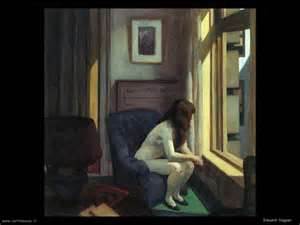 The messages and symbolism within ‘Bad Day At Black Rock’ are for some overshadowed by its style and form.  The dialogue is economical and the widescreen is used perfectly to provide irresistible compositions of men waiting and observing.   The images in the film are influenced by the paintings of Edward Hopper.   This is not, though, John Sturges, the director, merely adding visual sophistication.  The film transcends the pictorial.    Hopper knew how time and inconsequence isolate human beings.   This understanding is crucial to ‘Black Rock’.    Reno has a meeting with the other men to discuss how they should respond to McCready.  It is held in the open air and the characters are dotted around a frame bordered by a Western landscape.  The open air between the men is important.  The men are connected, which is why they make a balanced composition, but not by intimacy and friendship.  This is why the men stand apart.  Their links are those of the evil and the powerful, their heartless pacts and alliances.

The liberalism that left its mark on American culture subsequently struggled.  Ronald Reagan appeared and pretended that Reno and his kind had always been heroes and that we should not worry about their victims.  Reagan was handsome and had a fine voice.  More than once he wore a cowboy hat.

If you want to read more about American culture, Elvis and Frankenstein click here.

If you want to read about Brazil click here.

If you want to read about Frankenstein click here.