The greatest achievement of the Beatles was actually destructive.  In Britain, their success killed off the groups that imitated The Shadows.  Fortunately for all, the carnage was quite quick and for most it was sensible rather than painful.  There is always a problem with great simple ideas.  What originally inspires the talented to deconstruct and repossess with flair soon becomes a cynical opportunity for hustlers and ‘wannabees’.  We all have self-serving illusions.  There are people who, merely because they are self-employed, proclaim that they are artists and the sad truth is that I have too often been obliged to listen to routine tales about 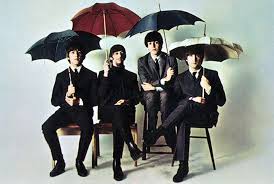 supposed creativity.  I have had more than one pint of bitter ruined.  Despite the endless boredom, the memories of early 60s guitar groups persists.    Not only me remembers the toothy grins, the dodgy suits, collars that rarely fitted properly and bizarre double step dance routines that unaccountably the audience would always applaud.   Meanwhile, Elvis was in Hollywood singing nonsense.  This was not a time to be a happy teenager.   Presumably, this was why everyone welcomed The Beatles with such delight.  It was still D-I-Y music with squeaky voices and a timid lead guitarist but most said,  ‘Good luck to them.’  At least, they were sincere.  The shameless hustlers were run out of town.   Only later, did we realise that sincerity and earnestness could cloy as much as cynicism.  No wonder, though, people tolerated hippies.  Anything was better than Shadows imitators.

The irony is that The Shadows were also copiers.  They stole their sound from Duane Eddy.  He was an American who was born in New York but grew up in Arizona.   This was a smart move because he was a tough looking man with immovable hair.  He needed a landscape at which he could stare.  Indeed, in his later years, he appeared in Westerns as a taciturn cowboy.  Not the kind of man we normally associate with guitar virtuosity so late night TV viewers can be forgiven for those moments when they were suspended in disbelief.    The first big hit of The Shadows was called ‘Apache’ and this was inspired by the Duane Eddy hit ‘Rebel Rouser’ although The Shadows were unable to catch the heavy reverberation that producer Lee Hazlewood created for Eddy.  Supposedly, Hazlewood recorded the hits of Duane Eddy in a huge empty oil tank big enough to hold 2000 gallons.  Lee Hazlewood cannot be underestimated because he transformed Nancy Sinatra into a rock star.  The albums Hazlewood made in his own name were a disappointment.  Without Eddy or support he was merely a failed groovy.  Eddy added no nonsense machismo.  This is what was odd about Eddy.  He was tough without being aggressive.  He was the silent hero and it even extended to how he played the guitar.

In 2011, Duane visited England again.  He had been a regular on British TV in the 60s.  He staged a concert in the Royal Festival Hall, which was a sellout.  The audience, every man woman and child, stood and roared and they gave him a standing ovation even before he played a note.  We should not be surprised.  Think of all those guitar groups and the debts they had in their personal accounts.  Perhaps the roar was no more than nostalgia and hero worship but it is tempting to think of one or two consciences being cleared.

Eddy had strong connections to Elvis.  In the 70s, the DJ Brian Matthew had a show on BBC Radio called something like ‘My Top 12’.  Rock stars appeared and picked their favourite 12 records.  It resembled ‘Desert Island Discs’ but lacked palm trees, sand or nearby ocean.   The performer whose records were chosen most by the guests was Stevie Wonder.  He was a main man, back then.  Inevitably, though, Elvis was selected often.  Duane Eddy was the guest one week.  He placed 2 Elvis records in his top 12.  He was the only person who ever picked two records by the same artist.  Recently, Eddy has recalled a conversation with Elvis.  They had talked about what they liked in music.  Elvis admitted to Eddy that he had a reactionary hatred of stereo.  Elvis was a mono fan because he felt the listener should feel the music as a block of sound that went somewhere deep between the ribs.   It is extreme to say so, but there is an argument that stereo as much as whatever happened in the Army contributed to Elvis becoming increasingly uncertain after 1960.  In 1970, Elvis covered the Sanford Clark hit, ‘The Fool’.  Lee Hazlewood had written the song and produced the original record by Clark.  Although the version by Elvis is actually musical the version by Clarke is stripped down minimalism.   A simple repetitive beat with a hook in each line that is no more than a pause but somehow works.   In the final phase of his career, Elvis could be easily distracted.  During the 1970 sessions when Elvis recorded ‘The Fool’, he messed around with the band between takes on ‘Peter Gunn’.  The version that Elvis remembers is that by Duane Eddy.  It is obvious from how Elvis attacks his guitar and how his screams of delight imitate the wailing saxophone.   Elvis always had a taste for crude music that worked.

Everything leads to the future.  Punk bands in the 70s played their instruments

badly and substituted a screaming rage for a lead vocal.  They argued it was valid protest and what they were doing would claim rock and roll for the ordinary.  They were a little late, of course.  Elvis had already insisted on the rights of the oppressed when he sang ‘Hound Dog’ on the Milton Berle show in 1956.  It may not have been the first rock and roll performance but it was revolutionary.   Now it is fashionable to dismiss the ordinary, which is why that performance is usually only seen as representing sexual liberation.   But, like the punks, his angry nihilism insisted on more.

The silent masculinity of Duane Eddy always denied anger.  Possibly, his dark sound had musical rather than psychological roots.  Whatever the source, it helped a lot of young men look tough on the dance floor.  If there are middle-aged women who remember hostile stares from their dancing days and need someone to blame then Duane Eddy played his part.  He was famous for inventing the ‘twang’.  Inevitably, this led to some dodgy album titles.  The ‘twang’ consisted of Eddy playing the bass strings on his guitar.  The reverberation provided by Hazlewood ensured that it dominated rather than supported the record.  The technique was not original but Eddy was unique because he used this simple approach to forge an identity and style.  Few will claim that Duane Eddy is a virtuoso but his catalogue covers all genres.  His latest album ‘Road Trip’ is quite subdued and haunting.   It evokes an inescapable highway stripped of prospect and certain destination.  He has, though, played everything including, unbelievably, gospel.  He succeeds because he appears to be without an ego.  The sidemen are given prominence when needed.  The great saxophonist, Jim Horn, is used to fabulous effect on many of his hits such as ‘Peter Gunn’ and ‘Dance With The Guitar Man’.  ‘Last Date’ is a moody ballad that succeeds brilliantly but mainly because of Floyd Cramer or somebody who sounds very like him on piano.   Air guitarists who sneer, though, should listen to ‘Rockabilly Holiday’.   Duane Eddy handles the up-tempo material very well.  Ultimately, it is easy to like the self-effacing, especially when they deliver big hits.  And, of course, he was the only rock and roll star who picked 2 Elvis songs on ‘My Top 12’.