Steve Ripley is the lead man in the band called The Tractors.   He has long red hair and facially he looks a little like Mick Hucknall who used to be the lead singer of Simply Red and who remains an unashamed Manchester United fan.  Other than that, though, the Tractors appear to be beyond criticism.  Ripley has played for Bob Dylan, which is either a paradox or an irony because The Tractors make you think of what the world might have been if Elvis Presley had retained his appetite for supremacy or if Bob Dylan had not picked up a guitar in Greenwich Village and instead merely written Alan Ginsberg sound alike poetry.

The Tractors play unpretentious rockabilly and country music.  The backbeat on the drums is simple and

relentless.  In the You Tube videos the drummer often plays just one drum.   This is don’t give a damn élan.   The detail on their records, though, is important because, crude backbeat apart, The Tractors are musical.  The band members are in demand musicians.  Indeed, The Tractors is hardly a band.  It consists of musicians who assemble from time to time to make an album.  They have only made a handful of albums in nearly 20 years.  Similarly, the concerts have been sparse.   Membership of the group can vary although there is a core with Steve Ripley as a powerful centre and leader.  Guests have also appeared in the studio and they have been impressive.  Leon Russell, Bonnie Raitt, Scotty Moore, D J Fontana, James Burton and J J Cale have all played on Tractor records.

Apart from being a talented guitarist, Steve Ripley also has engineering skills, which he uses to make records in a singular way.  He records a basic track with the band in one take and with one mike.  Ripley argues this is necessary if he is to capture the excitement heard on the records of Elvis and Chuck Berry.  If this sounds like minimal purism, there is a modern compromise.   The stereo detail has to come from somewhere.  After the basic track and feel has been captured Ripley then works with individual musicians to include additional contributions.  This mix of approaches does not sound like a recipe for integrity but whatever he is doing it appears to work.  The records bounce and are also interesting.  Although the groove is important and the loyalty to the backbeat an article of unwavering faith, the listener can recognise usually brief references to various American musical forms such as Western Swing, Cajun, rhythm and blues and hard core country. Because life is complicated you can even hear the influence of Bob Dylan on the songs I Wouldn’t Tell No Lie and A Little Place Of Our Own.  Mainly, though, the Tractors remain true to the roots of rock and roll.

Their lyrics are unpretentious but have unwavering loyalty to the common man.  They are sharp but avoid being self-consciously smart.  Whether the Tractors lean to the left or the right is difficult to determine but any band that releases an album called Trade Union has to have political potential and is worth a vote.  The first album by the Tractors featured a song called Blue Collar Rock.  It avoids social comment and is more about ageing than politics but the title like their music shows which side they are on, that of ordinary people.   Perhaps this is what makes them musically conservative or at least so willing to acknowledge the past.  They associate rock and roll with a time when the ordinary had potential and power.  Ripley even remembers when Elvis was King and his line in the song, Trying To Get New Orleans, where he admits ‘I need a little Elvis’, describes accurately the symptoms for those fans addicted to the music of the great hip-swiveller.   In fact, their Presley tribute, The Elvis Thing, leads the pack of songs that have been recorded about Elvis.   Scotty Moore and D J Fontana feature on the record but Ripley makes no attempt to recreate the music of Elvis.  Somehow, he honours the legacy in a way beyond others.  The record is heartfelt and genuine, and the absence of opportunism makes it feel clean and worthwhile.   The same can be said of all of the rock and roll music made by the Tractors.  It differs from what they honour because they have their own sound but nobody doubts what they value and respect.

Identity is always important in the best of American music, which is why traditions continue despite the efforts of the powerful. The alternative identities range between genres, regions, class and race and are important because they are rooted in experience that is actually independent of the music.  America is a flag waving country in a way that many Europeans like to avoid.  But the flags are many and numerous.  Not always but often they are independent of the Stars and Stripes, the gloved fist of Black Power is an obvious example.

The first album of The Tractors begins with the song, Tulsa Shuffle.   Ripley has also spoken of his faith in the music of his region and what he thinks is a special commitment by local musicians to a foot stomping beat.  Clearly, there is a taste for full tilt music in Oklahoma.   The Tractors album, Fast Girl, was dedicated to 60s hero, Leon Russell, and there is a connection.  Russell in his prime leaned more to gospel roots than the Tractors but both, perhaps to compensate against limited vocal talent, push the beat and groove to the limit.

The second album of the Tractors includes Poor Boy Shuffle and the regional identity becomes more important because it champions a belief not only in place but the people of that place.  The concern for the ordinary over the influential is reflected in the two albums, Have A Tractors Xmas and The Kids Record.  The albums have a great beat and a good time feel that makes them essential but the latter, with songs like Old McDonald Had A Farm, does not shy away from the kind of material that got Elvis into such trouble.  Like the back beat on the single drum it is more do not give a damn élan.

Although important, loyalties will not obscure truth forever. Place and communities cannot prevent inevitable disappointment.  My Blue Heart is a bleak ballad and an honest soul baring account of a broken heart.  Social identity is meaningless when intimate kinship and love disappears.   Ready To Cry is also powerful and, despite the backbeat ensuring that it will never qualify as deep soul, the song itself would be worthy of any great soul singer.   Inevitably, the vocal of Ripley is influenced by Elvis, not because Ripley wants to sound like the King, he does not, but because the material needs vocal ambition.

The concerns of Ripley and his pride in identity are never chauvinistic.  The music for all its confident 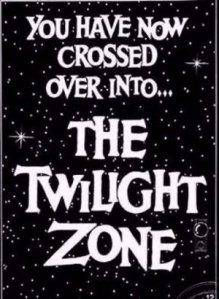 chirpiness contains like horror fiction, fear and longing.  It is no surprise that Stephen King is a Tractors fan.  The fear is for what may come next, as in the soulless world that is described in Computer Controlled, and the longing is for what could have been and occasionally might have been in the past, days evoked in the song Good Old Days.   But, because what we want and what is are often different, the potential for horror exists.  For the Tractors, who are committed to having fun, the horror is more good humoured than terrifying and not unlike one of the more whimsical episodes of the Twilight Zone.  Those who think this fanciful should watch the video of their hit, Baby Likes To Rock It.  Twilight mastermind, Rod Serling, would not only approve, he would risk a dance.  In fact, his apparition might be there in the crowd.  Watch carefully.

Watch the Tractors perform Baby Likes To Rock It: