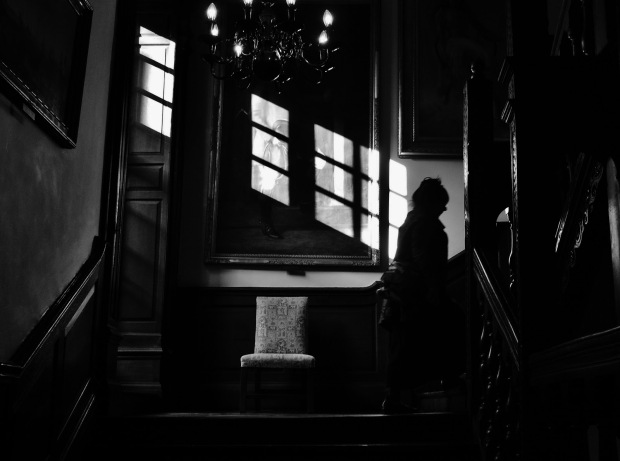 Ghosts are not for those who believe that the universe consists of random matter.  They exist for a reason.   Ghosts are obliged to stay behind.  The less interesting dead are in heaven or hell.  Ghosts remain on earth because they have been thwarted in their ambitions, sometimes romantic, sometimes a denied inheritance and others mere destiny.  Rumours of ghosts occur everywhere.  Breeze Hill in Liverpool is in the middle of a working class area but the street has 3 haunted homes.  One of the ghosts has a dreadful disposition and a reputation for violence and terror.  Ghost hunters have run in fright from the rough Scouser.  But in movies the tendency is to make the ghost an aristocrat.  It is easier to develop a story that way, and ghosts somehow suit the décor of our finer homes.  Ghosts may walk down the stairs of terraced houses in Liverpool but that is real life.  Dramatic cinema it is not, although Liverpool horror writer, Ramsey Campbell, has always been keen to drag British horror down the social scale.  Interestingly, only the Spanish have made a film of one of his novels.

Ghosts, vampires and zombies are all creatures of unrefined taste.  The horror is rooted in their appalling indiscretions and judgement.  Lacking etiquette, they invade space, dress badly and persist in demanding attention.  Writers assume such behaviour occurs frequently amongst ordinary people.  If a ghost is to be interesting, he requires manners that offend his social class.  Sometimes ghosts have a sense of humour but it is dark rather than gentle.  Dracula is sarcastic and thinks the suffering of his victims amusing.   Ghosts also mock although they can become supportive friends.  The best of ghosts are kind to children.  Some writers, usually women, insist that ghosts are the only males that do understand children.  The average ghost is limited but he is often an improvement on the boring husband in the living room.

Inevitably, the vampire has the edge and the zombie misses the fun.  Such is the afterlife.  Vampires have a double existence, which is presumably why so many people would like to be one.  They exist as a member of society and, as a creature of the night, their immortality continues.   Living forever takes time and in the best it inspires patience but vampires and ghosts have not become what they are because their characters are exemplary.  They struggle to be self-critical but they can brood.  Ghosts have no responsibility, no work ethic for them, and the vampires get the women and have clothes that last as long as they do but both creatures are blighted by self-pity.

Maybe this is why zombies are now so popular.   A zombie is obliged to support the herd and maintain effective working relationships.  And the zombie that has sex or any kind of pleasure is definitely exceptional.  They may march relentlessly but nobody has ever mistaken this for enthusiasm.  Limited they are but once the zombies arrive the vampires and ghosts become awfully quiet.

Howard Jackson will have 2 zombie stories featured in the forthcoming Red Rattle Book, ZOMBIE BITES.  His collection of horror stories, NIGHTMARES AHEAD, will be published by Red Rattle Books next year.

For more information about Red Rattle Books and other books by Howard Jackson click here.