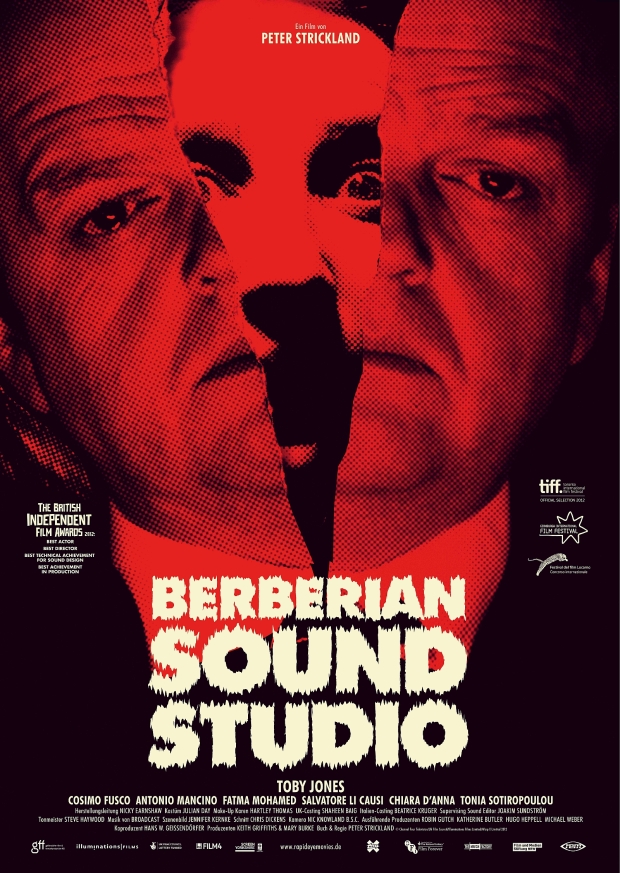 In the early 70s Flaming Star appeared in the Sight and Sound list of 10 best ever Westerns.  This was a surprise because Elvis Presley played the lead role in Flaming Star.   A vehicle for a popular singer had broken free of the limits prescribed by critics.  Berberian Sound Studio is a low budget horror movie directed by Peter Strickland but it made the 10 best films of 2012.  Since then it has had a quiet existence, confined to Film 4 in the main.   Inside the brains of those who have watched the film it is different.  There it is very much alive.

Berberian Sound Studio begins with the titles of a film called The Equestrian Vortex.  The titles serve as a tribute to Italian horror filmmaker, Dario Argento.  The audience does not see any of this film.  The horror is in what we hear, and this is manufactured in the Italian sound studio that employs Gilderoy, the shy and mother dominated Englishman who works as the Foley operator.  His experience has previously been confined to working on nature films that idealise the English countryside.  Virtually all of Berberian Sound Studio takes place in the studio but it becomes clear that much of what is happening in the film reflects reality.  Francisco, the head of the sound studio, is an exploitative powerful male who avoids paying Gilderoy for his work and Francisco, like Dracula, has power that cannot be challenged.  Actresses are harassed by handsome unscrupulous males, as they would be in any horror movie.  Gilderoy is disturbed by his new work and what he sees in the horror movie but slowly he is drawn into the film.  As the horror becomes part of how he sees the world and himself, his identity begins to crumble.    Perhaps, the film has a flaw.  The conflict between the shy English technician and his confident handsome Italian employers depends on stereotypes but much of what happens is inside the mind of Gilderoy and it makes sense.

Berberian Sound Studio has a film noir equivalent.  Road To Nowhere by Monte Hellman also explores the uneasy distinction between cinema and reality.  Both films insist that ultimately what we see on the screen will contain something of ourselves and that what we see in the real world will be shaped by what we see on the screen.   We are all out there in films by someone.  None of us will ever know all the films that have our alternative identities.  Horror is guaranteed because we have repetitive longings and fears.   We are compelled to imagine ourselves as those that we find terrifying.  Like us all, Gilderoy is unable to resist the welcoming horror.  Inevitably,  filmmakers will sometimes become lost on their own imaginary roads.  But as the Goths understand well, none of us can claim independence.   In the film noir of Hellman such thoughts lead to nowhere and, in the horror of Berberian Sound Studio, they produce madness.  Well, the stakes of the genres were always different.

Howard Jackson has written 3 books that have been published by Red Rattle Books.  His next book, Nightmares Ahead, will be published in spring 2014.  He has written 3 stories for Zombie Bites.  If you want to read more about zombies and vampires click here.