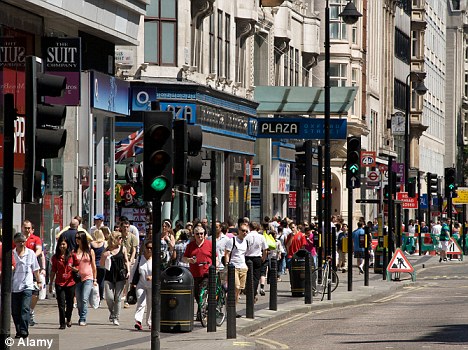 Every year ten million tourists visit Oxford. The residents must think they are living next to a permanent football match. Matthew Arnold described Oxford as the ‘City of Dreaming Spires.’ Chance would be a fine thing. The benefit of Oxford having so many visitors is that there is little space for automobiles. Parking is horrendous.

Oxford is a good place to see the River Thames and it improves once you are inside a boat. Row away from Oxford on a sunny day and you will think that you will live forever. The Oxford Canal, which was built in 1790, links Oxford to Coventry. It is a fine journey but not as romantic.

Oxford University has over thirty self-governing colleges. The architecture has a wide variety of styles. Some will regard this as a virtue but the fake Bridge of Sighs is an embarrassment. In the 13th Century three colleges were already established. Now the University is ranked fifth best in the world. Cambridge is number one. Lawrence of Arabia attended Oxford University. It is tempting to retrace his steps and wonder what the restless warrior would have thought. Academic dress is required for the examinations. Observing the tradition might be how Lawrence acquired his taste for robes.

Students like to drink, so it is no surprise that Oxford has a brewing tradition. There are plenty of fine pubs that sell decent beer. Wadham College owns an impressive pub called the Kings Arms. Beer and food are excellent, and it is possible to watch a football match there alongside quiet enthusiasts. This is difficult to credit but I did it one very pleasant afternoon. Thought can triumph over emotion. No wonder intellectuals are clever.

My visits to Oxford were once frequent. I have a friend who lives in a village outside the City, and my daughter graduated from Wadham College. In the beginning I was a proud father charmed by the City. But I encountered many that existed in too comfortable bubbles. The opportunities missed by Oxford are as depressing as the achievements are impressive.

Critics of Oxford and Oxbridge blame the British class system and the influence of public schools whose pupils dominate recruitment into the University. Perhaps the comfortable bubbles are sometimes misunderstood defence mechanisms. Privilege must undermine the claims of merit of any individual even when in some instances those claims are valid. Oxford has been linked with the establishment for some time. During the English Civil War, the court of Charles 1 was relocated from London to Oxford.

At the beginning of the 20th century WR Morris made and sold bicycles.   In 1912 he added wheels and an engine to his bicycles and called them motorcars. His first factory was in an Oxford suburb. Today motor manufacturing is almost extinct in Britain but Oxford retains a manufacturing tradition. Oxford is cosmopolitan. The University and the local firms that fill the Oxford Science Park attract immigrants. Some of the self-guide tours around the City focus on its industrial heritage. All of it was helped by the kind of people who discard protective bubbles and watch football matches without screaming at the TV screen.

Next week, over to Cambridgeshire, Peterborough