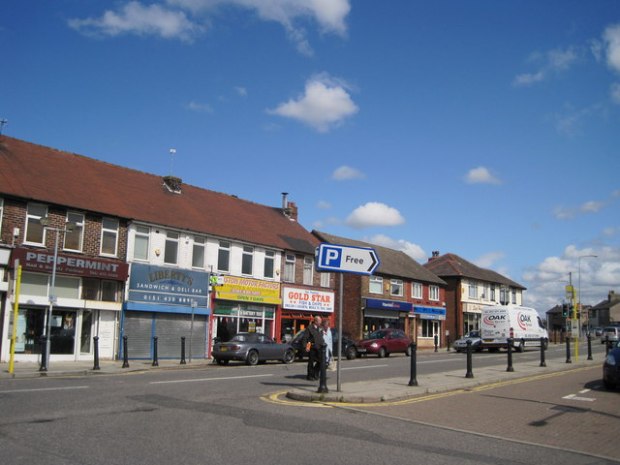 Of all the places described in this tour Whiston is the least distinguished. Whiston has been included because it is where I was born.This series ends where I began. I lived in Whiston until I went to University. A few famous people have been born inside the wards of Whiston Hospital but most were still in the arms of their mothers when they abandoned the place. I waited until I was eighteen years old. The BBC presenter Stuart Maconie left for Wigan when he was a child. In his book about the North of England, Pies and Prejudice, Maconie described Whiston as the Tijuana of the North West.   Whiston is outside the boundary of Liverpool, and the population consists of overspill from Liverpool and locals. If the romance of Maconie is correct, I was isolated in borderland mystery, an outsider to both cultures.   I grew up listening to both Liverpool and Lancashire accents, and the difference existed in my own family and within the living room. Even today I struggle to note the difference between Liverpool and West Lancashire accents.

Whiston consists of both Whiston North, which is near Prescot, and Whiston South, which is near Huyton. I am from Whiston South and much of Whiston North I regard as Prescot. In the borderland, boundaries, and not just accents, confuse and add to the mystery. Most people who live in Whiston travel outside for work or they did before the Hospital expanded. The Hospital now employs 4,000 people and it has strong teaching links with the University of Liverpool. The original building was Prescot Workhouse, and that indicates how poorly defined are the boundaries in the borderland.

Whiston South, where I lived, is a two street village surrounded by an overspill estate. There was excitement but it could consist of discovering who were the new owners of the local chip shop. The building of a chemist provided drama for several months. The pub had a decent bowling green, and visiting it was regarded as a day out. But if life lacked drama, there were compensations. Two woods were within short walking distance and they offered mystery. Within the largest wood there was a lake where I swam although this was forbidden. When not in the woods, the rest of the time was spent playing football on the field below.  Whiston had a junior football team that attracted decent talent from Liverpool. Steven Gerrard played for Whiston Boys and here he is.

Willy Russell who wrote Blood Brothers and Shirley Valentine was born in Whiston and only left after he became famous. I am not sure how soon Peter Briggs left Whiston but, as he is now in Hollywood, he is not likely to return. He wrote scripts for Hellboy and Alien vs Predator.

Before the overspill arrived Whiston South was a mining village. My grandfather was a miner. Today the white working class male is seen as flawed and limited but I grew up in a community where ordinary men posed as heroes. Somehow these men of the borderland drew from an ill-defined environment, adopted fluid identities and created their own mystery to project and sometimes assume self-sufficiency. Knowing this was my inheritance. All my life, as I wandered around Britain, it has haunted me. For that I am grateful.

Next week, a new series and some surprises.