Kevin Bacon suffered distress during the making of Tremors. He was ashamed to be acting in a film about an underground monster. Tremors may not contain his finest acting performance but later he made films less accomplished. Bacon was a young actor when he was embarrassed by monster movies. Now he is middle aged and makes adverts.

Nothing succeeds like confidence, and director Ron Underwood was young and full of self-belief when he directed Tremors. The success of Tremors was not followed by a run of box office hits for the director, and his career faltered. After the failure of Mighty Joe Young, Underwood settled for a good living in television.

Tremors is a parody of a 50s monster movie. More than one character asks ‘What is going on?’, drops their mouth open and refuses to blink. To ensure belief is suspended Fred Ward reminds us that ‘This is weird’. Only the young should think this funny but somehow it works. Ward is a marvellous actor, and that helps. He looks like the ordinary bloke that you would trust in an unfriendly barroom. Ward combines the charisma of early Charles Bronson and the authenticity of 40s noir star Charles McGraw. Ward does not have the gravel voice of McGraw. He is not a handsome man but he has worked as a model, so he must appeal to women. Like Bronson, he has good hair and knows how to walk in denims.

Like the country music they listen to, the people in the West change but the scrub valleys and fabulous mountain peaks are permanent. The landscape defines the West. This becomes obvious when Val and Earl, the two heroes played by Bacon and Ward, borrow horses to make an investigatory ride through the stunning scenery. The West may have the odd gun carrying psychopath but it also offers landscape and solitary freedom. The monsters in Tremors tunnel down under the ground and threaten not just people but the magical land itself. Tremors may be a comic horror movie that refuses to take itself seriously but the importance of the land to the Western myth means that much is at stake. 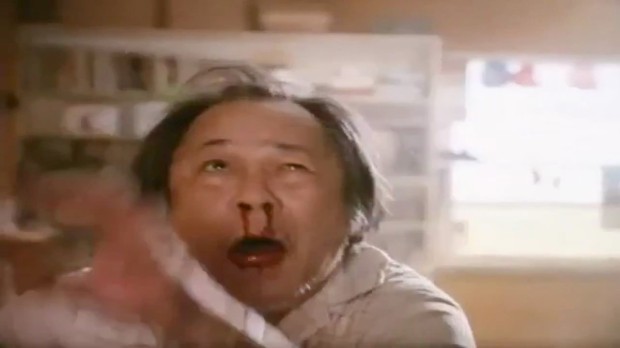 Because the writers and directors have created a parody, there are plenty of movie references. The scenery and small town evoke Bad Day In Black Rock, especially when we view the wilderness in fast tracking shots. The Japanese store owner Walter Chang may be a reference to the unseen Japanese victim in Bad Day At Black Rock. If the presence of Chang and his ownership of the store suggest social progress, this is undermined when Chang is swallowed by the underground monster, the Graboid. The end of Chang recreates the death of Quint in Jaws. When Bacon drives the caterpillar bulldozer, he screams and waves his arms in memory of The Wild Bunch and Warren Oates in front of the stolen train.

Tremors is a movie that does more than capture the spirit of 50s monster movies. It also exists as a response to the Westerns and the philosophy of the great American director Howard Hawks. He used to put his characters in tough situations to establish if they were ‘good enough’. Rebels were not welcome in a Hawks movie. He wanted men and women who would be dependable and loyal to the team. Some critics think the films of Hawks are humanist masterpieces. Others regard them as no more than adolescent fascist fantasies. The truth may be that they are both. A hero in a Hawks movie needs others but is accomplished and has superior understanding. His heroes are sturdy and elegant.

The heroes that defeat the Graboids are dopes. They curse under pressure and frown when they have to think. But the people in Tremors are not worthless. The stupid may not be very smart but they can be brave and they are useful in battle. 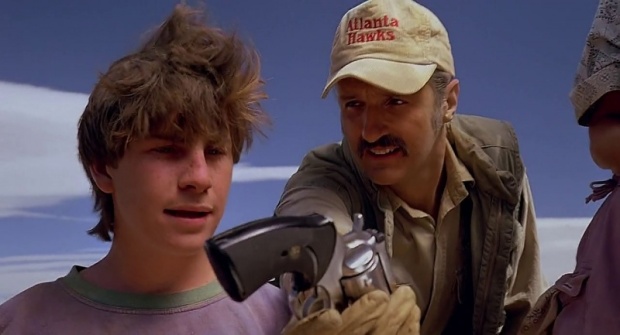 There are fourteen people in the remote town of Perfection. The broken sign says so. After the Graboids attack, the people of Perfection become isolated, like John Wayne and Dean Martin in Rio Bravo. The team in Perfection is not as united as that in Rio Bravo. In that Western Ricky Nelson plays the young man who is exceptional with the gun. Melvin Plug, the teenager in Tremors, is not the equivalent of Ricky Nelson. He is given a gun but it is without bullets and it is to persuade him not to fight but flee. Rhonda is a seismographer who just happens to be in the area when the Graboids attack. Like Angie Dickinson, she is passing through. Although a plot device, Rhonda is attractive and intelligent and also a key character in the film. No one in Tremors, though, has sleek Hollywood beauty. Ward has wrinkles, and Bacon a terrible hair cut. There are also no Afro-Americans in Tremors. Walter Chang and Miguel the Mexican constitute diversity. They are not crude comic characters as they would be in a Hawks film and neither are they cowards but their fates are not as important as the heroes. Although anything more would weaken the 50s parody, in this particular Oscar year it is difficult to watch the offhand treatment of the ethnic personalities.

Despite the sexism of Val and Earl, Rhonda is able to participate in the fight against the monsters. Val and Earl ignore what she says when they meet Rhonda but they soon become dependent on her ideas for survival. The three of them spend the night on a rock, the only place they are safe from the Graboids. The film begins with Val urinating and scratching his backside. Later, on the rock during the night, Rhonda, Val and Ward are all obliged to urinate. This moment without privacy confirms that they are all equals. This is what the West will now have to rely on for heroes. 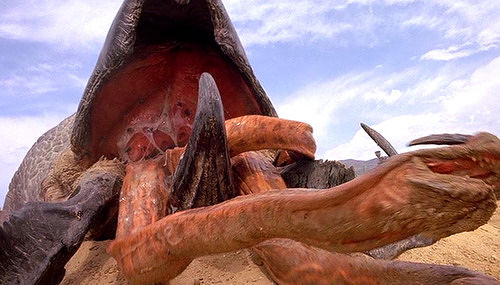 The role of Rhonda as a scientist evokes the conflict that exists in the original version of The Thing. Hawks set up that film but the content must have left him feeling abashed, not unlike the young Kevin Bacon. Hawks decided not to direct. The Thing, though, is a Hawks movie. In that film the military men destroy the outer space monster and provide relief for the planet. The scientist wants to save the monster for research and argues against the military. Tremors remembers the issue but neatly sidesteps the debate. After the Graboids have been destroyed, Rhonda stays in Perfection to do research on the dead carcasses of the monsters. Science and intellectual curiosity will prevail.

For the people in the town to pull together, instead of being divided and defeated as they are in Bad Day At Black Rock, some dubious characters have to be accommodated. After all, the people of Perfection, now they have aged, will be voting for Donald Trump. Even the local citizens think neighbours Burt and Heather are odd. In their basement they have an arsenal that could defend the Ukraine. To make them acceptable the film defines them as two people who are paranoid about invasion from outer space. The guns of Burt and Heather and their pioneer spirit are essential to the team. But more is needed than old-fashioned western triumphalism. Rhonda has the ideas, and survival requires the team to often flee rather than confront. In one instance Rhonda, Val and Earl pole vault to safety. These are not typical Western heroes and they lack the dignity that Hawks assumes exists in triumph. 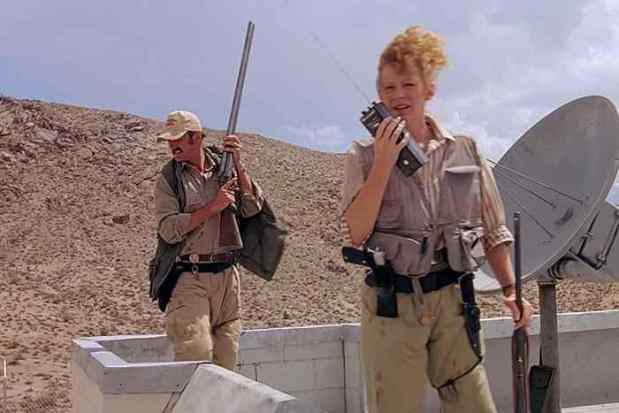 Tremors is comic but none of the characters have funny lines of dialogue. The joke is on them rather than them making jokes. When the characters do attempt jokes they are feeble. The movie is also tough on the educated. Doctor Jim and his wife Megan take the trailer to a desert spot in search of harmony with nature. Their deaths are gruesome but funny.  The car, which is a refuge for all American families, fails. The car sinks into the ground and its impotent headlights point up at an indifferent sky.   Later, Burt and Heather abandon their arsenal and the others exit the town. All the stockades in Tremors are inadequate.

Tremors relies on special effects and the speed of the Graboids for surprises and shocks. There is something satisfying about watching someone be dragged through the desert and sand at record speeds.   This effect is embellished when Val runs along the boardwalk and each plank springs up behind him. Perhaps this is the reason the film succeeds. The writers and director, who were all college friends, are happy to use cartoon slapstick humour.

The bulldozer, which takes the survivors to the final stand against the Graboids, pulls a huge metal trough. Val drives the bulldozer, and the rest stand in the trough. The bulldozer is not just a means of escape but it has taken our Western heroes away from the town and back to the wagon train. Again the heroes flee rather than confront. Indeed, it is the willingness to run that ensures success against the threat. Val defeats the last Graboid by running away from it.

The jail in Rio Bravo offered the lawman and his friends security. The basement that contains the arsenal of Burt and Heather had to be abandoned. Times change, which is why so many people are keen to vote for men like Donald Trump.

Howard Jackson has had four books published by Red Rattle Books. If you are interested in original horror and crime fiction and want information about the books of Howard Jackson and other great titles, click here.