This Canadian film has two titles. The alternative title is Backcountry.  The existence of two titles implies identity confusion but none exists. Both titles are concerned with location although neither of the titles is inspiring. The film has a sinister message about the impact of the rural on urban dwellers. Place is significant but this is a film also interested in people.  Blackfoot Trail might be set under an open sky but it is a chamber piece dominated by a young couple. Alex and Jenn head into a Canadian National Park for a trekking holiday. The bear that they meet is important to the narrative but nowhere near as articulate as Yogi Bear. The brief moments of action are filmed with a nervous hand held camera, and the gruesome effects are avoided. A few editorial snips for language and the disembowelling highlight, and the film could be watched with children.

On their walk through the National Park, Alex and Jenn meet a suspicious stranger, Brad, and then a dangerous black bear, name unknown.  The first half of the film is dominated by the meeting with Brad. The climax concentrates on the escape of the survivor from the bear. Brad has an unconvincing Irish accent, a dodgy ponytail, and his description of his Irish history is flawed. The two men, Alex and Brad, clash, and the scenes of the two males in poorly disguised conflict echo the great Roman Polanski film Knife In The Water. The title of that black and white classic referred to how easily settled existence, the water, could be disturbed by the desire of men for power and status, the knife. Blackfoot Trail may be a horror film but its purpose is to reveal human psychology. It is a decent film that deserves a better title. 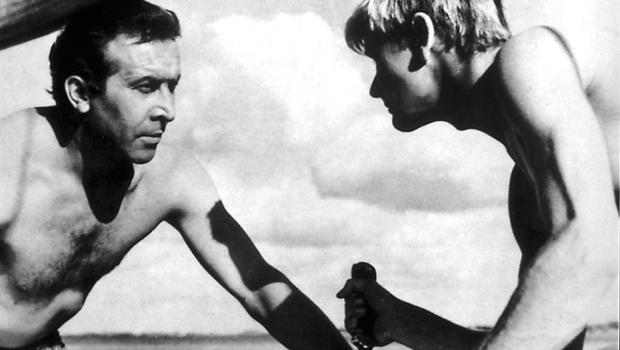 As in the Polish film by Polanski, the arrival of another male redefines the relationship of a man and woman. It produces conflict, weakens trust between Alex and Jenn and undermines identities.   The solitary male may be an insensitive jerk that urinates in front of others but his sly insults suggest that he believes he is the man worthy of Jenn. He is also the alter ego who uses his freedom and independence to taunt Alex, the male dependent on a woman. In Blackfoot Trail the clash of male egos not only undermines confidence in Alex but also affects Jenn; her attitude to Alex changes. She is aware of his weakness, and this undermines her faith in her own worth.   Our trust in the permanence of identity is the first illusion to be challenged by Blackfoot Trail. The arrival of mysterious strangers affects the women in Knife In The Water and Blackfoot Trail in different ways. In Knife In The Water the woman acquires confidence and belittles her husband. The more sympathetic behaviour of Jenn is what makes Blackfoot Trail less misogynistic.

The Canadian film was inspired by a true story. A woman was killed by a black bear in the National Park. Despite his own injuries the boyfriend dragged his girlfriend back to the car. He hoped that she would survive. The injuries to the boyfriend needed 300 stitches, and the pain he suffered in the attempt to save his girlfriend would have been considerable. He was subsequently given a national award for gallantry and bravery by the Canadian government.  Blackfoot Trail tells a very different tale. In this film the woman is more resolute than the male. The exposure of flawed modern masculinity and the notion that women have superior self-sufficiency are acceptable themes.  Polanski had a point, and men have to admit that nature would not select the weaker gender to carry children.   No one, though, could blame the family of the wounded boyfriend in the actual story if they were offended by the film.   It would have helped if the film had been set in a different country. A disclaimer at the end of the film would have probably exaggerated the offence.

A key scene in the film is when Alex meets the park ranger before the couple begin their trip. The ranger offers a map but Alex refuses and says that he has visited the trail often as a child. This will not be the first time Alex clashes with another male and needs to assert his competence. The refusal of the map is not necessary for the film to make its point. Nor do the young couple have to become completely lost as they do in the second half of the film.  Anxiety is important to the deteriorating relationship and it could have been achieved without this contrived narrative twist, especially as the strength of the film is in how it avoids melodrama most of the time. 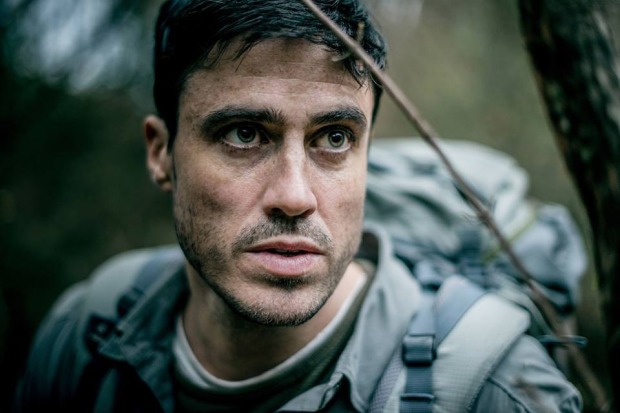 Alex works for a friend in a landscaping business. Brad, the threatening stranger, makes fun of this job, saying that this work is supposed to be done by Mexicans. Brad, of course, is a fool but he is a danger to a male who is undermined by his needs as a modern urban man. Alex yearns for success and competes with other men. The only man he can work for is a friend who no doubt has become used to Alex.  We discover that the trip has been arranged by Alex so that he can make a grand proposal of marriage to Jenn in a special location. Alex confuses romance with gestures designed to add to his grandeur. He has to impress.

The film begins with a shot that shows Alex and Jenn leaving a city overcrowded with automobiles. The technology that makes life in the city inauthentic is our means for supposedly discovering authenticity. Alex plays music inside the car, and the couple sing along to music they regard with contempt. Alex and Jenn may not be heroes but they are confident of their postmodern superiority. On their first day in the National Park the couple swim nude in a lake. Alex and Jenn are willing to undress and share nature. They think the wilderness will empower them as human beings.  The belief is glib and inspired by holiday brochures and romantic propaganda. The faith is soon undermined by reality. Alex and Jenn do not even experience wilderness. The lake is close to a man made trail, and they are on a camping holiday in a National Park. On the first day they pass other tourists and observe the countryside routine of grinning and saying hello to strangers. But even this managed environment is dangerous to the naïve people who think that it might offer an opportunity for the authentic glory denied by technology and the city. When the fight for survival occurs, it is common sense rather than the skills of natural man that become apparent. Jenn climbs a tree so that she can rest and be safe from the bear. The couple may have sophisticated camping equipment that requires knowledge to operate but the climbing of the tree is the first practical action taken by either Alex or Jenn. This is how people survived nature. They utilised simple ideas available to all rather than the elaborate skills and hardiness of the exceptional hero. That nonsense came much later.

Missey Peregrym plays Jenn. Before being an actor Peregrym was a fashion model. Her appearance is important and not just window dressing for the eyes of the audience. Her transformation from glamorous creature to wounded animal is convincing and a warning that we delude ourselves about human appearance and nature. Blackfoot Trail may be a simple example of the survival horror genre but it is handled with aplomb.   True, even Alex would have had a map and a compass, but, apart from the intended shocks, there is nothing in the movie that will jolt an audience. The dialogue is natural and unforced, and the events are credible. Most of the time the film is not that terrifying but that is the point. The black bear does not look monstrous. It is the innocent hunger of the black bear that causes the loss of life not violent rage.   The wilderness has the virtue of being an empty landscape that flatters our egos. It is a place, though, where unencumbered creatures die alone, defeated and clueless. Blackfoot Trail can be compared to the also decent Into The Wild. Both are inspired by true stories and both films are less than sentimental about wilderness and our romantic illusions. 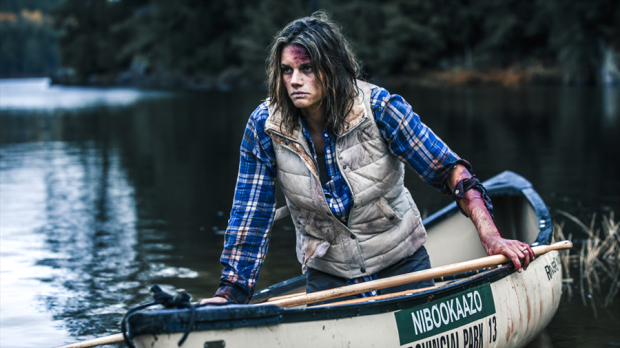 There is salvation for at least one character. Salvation from the danger of death comes at a price because it always redefines our relationship to the victims. We will be different, and so will our memories. We survive but not as we were before. This becomes apparent in the clever final image. Others, those who did not need dramatic salvation, will not understand that serious loss cannot be recovered. The genuine survivors become a little more independent but no one, and especially the self-deluded Brad, is self-sufficient. In these absurd neoliberal times, that is a message that deserves a hearing.