Mary Reilly has many of the ingredients that we remember from Hammer horror films.  The Victorian costumes are tight, and the rooms of gentlemen have plenty of furniture. To catch our eyes the doors inside are painted red. Everyone walks with a straight back, and the anxious hurry through London fog. The elite rest on their walking sticks, and the poor scatter. Because this is a film, the fog is white and not the yellow muck that plagued Londoners in the 19th Century. No wonder Jack The Ripper never worried about witnesses to his dreadful crimes.  The difference between the typical Hammer film and Mary Reilly is that this film has a script written by someone who does not have a tin ear for dialogue. The film retells the tale of Jekyll and Hyde but through the perspective of the maid. We do not need to worry about spoilers. Everyone knows Dr Jekyll and Mr Hyde did not have a happy ending.   The fate of Mary is ambiguous but it does not require melodrama. She loses an employer and a job and becomes confused but there may or may not be hope for the quiet maid at the end of the film. This should surprise no one.

Creativity consists of talent, sensitivity, serious application and skill. It also requires the creative, when they work, to make decisions. Sometimes the talented can make wrong choices about scenes, characters and plot. Mary Reilly attempts to combine a sensitive study of a complex relationship and sensational gothic horror. Not every call made by director Stephen Frears feels right but no one should underestimate the difficulty of knowing what to do for the best.  The serious will want restraint, and genre fans will want blood. The brothel owner Mrs Farraday adds little to the film, and her slaying takes the story too close to explicit horror. The appeal of the original story was that we had the sense that the evil of Hyde was beyond not just the Victorian imagination but our own.   Robert Louis Stevenson makes it clear that Hyde has murdered but the violence in the novella may be a consequence of a reckless lifestyle and foul temper rather than a brutal compulsion to harm. In The Strange Case Of Mr Jekyll and Mr Hyde bourgeois manners and ignorance define the shock and horror. In his masterpiece Treasure Island, where he wants to reveal obsession and greed, Robert Louis Stevenson is more explicit. This novel also happens to have some of the finest exposition in English Literature albeit that Stevenson is Scottish. 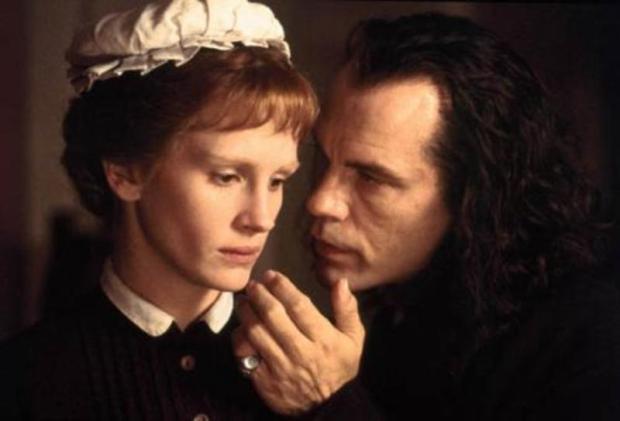 The performances of John Malkovich and Julia Roberts in Mary Reilly have attracted criticism. Despite the emphasis on gothic style within the film and an interesting yet anything but realistic story some people have carped about the American accent of Malkovich and the attempts at an Irish brogue by Roberts.  Mary Reilly was made in 1996, and dialogue coaches were not as common then as they are now. Malkovich is an American actor, and there is no reason why Jekyll cannot for the purpose of the film be an American resident in London. Roberts never masters the rhythm of the Irish accent but she is good at catching the soul of an oppressed innocent.   She has clear eyes and is sympathetic and likeable. Her charisma is rooted in a mystery that has vulnerability at its core. Malkovich does not emphasise the difference between Hyde and Jekyll. The former is clean-shaven and has dark hair. His features do not become grotesque. Hyde is not monstrous, and Jekyll is not the familiar cultured gentleman who possesses impeccable manners.

The book Mary Reilly was written by Valerie Martin, and she lives in Louisiana. The book and the film have an additional American sensibility, and this is a bonus. It is possible to imagine Jekyll as the plantation owner tortured by his conscience and Hyde as the man who will not deny himself the opportunity to use slaves to indulge his desires. Malkovich creates an original interpretation of Jekyll.  The actor defines a gentleman as someone compromised and frayed by privilege, wealth, appetites and a conscience. Interesting this may be but Malkovich is perhaps a misguided choice for the role. He has an unusual and distinctive voice but it has a limited range. Malkovich is best at being weird. The two extremes between obedience and rebellion are not in his quirky nature. It is valid to keep the distinctions between Jekyll and Hyde subtle but the voice of Malkovich denies rather than enhances subtlety. If any subtlety is achieved, it is not present in the final scene. In their death throes the two bodies of Jekyll and Hyde exist as separate entities in the one body. Imagine a head struggling to leave one of your shoulders. No doubt there will be a technician who is proud of this effect but this technical work is redundant. It is neither the equal of the transformation in An American Werewolf In London nor appropriate. The distortion of the body makes Mary squirm and it provides a climatic shock for the audience but it is inconsistent with what has been suggested by Malkovich, the extremes within one nature rather than two battling individuals. The decapitation of Mrs Farraday and the dual headed monster look like ideas imposed by producers.

The film is best when it is being subtle and there are enough of these moments for Mary Reilly to qualify as superior horror. At the end of the film we understand that Mary was attracted to both Jekyll and Hyde but not certain as to why and how she was attracted. The obvious explanation is that she was attracted to the physicality of Hyde and had sympathy for the troubled Jekyll but it feels more complicated than that.   Mary has the truth explained to her on two occasions. When Hyde explains to Mary, we see the two in close-up. When Jekyll says almost the same thing, we watch from the top of a very tall staircase. Both relationships are strange and extreme but in different ways.

Jekyll has a monster within him but without Hyde as his alter ego he may not have been able to acknowledge Mary as a human being. Jekyll likes that Mary reads and is impressed by her curiosity. More than a few of their conversations take place in the library. Mary is defined by work and servitude and is grateful for modest comfort and security. She also has memories of an abusive and violent father. Her past produces not just pain but suppressed hatred. Good and evil can be explained as the consequences of love and hatred. Mary has enough hatred to feel an affinity with Hyde. She also understands the benefits of puritanism and hard work. She may lie down next to the body of Jekyll at the end of the film and seek consolation for a wounded heart but, like Jekyll, she will have to make a choice between the two aspects of her nature. 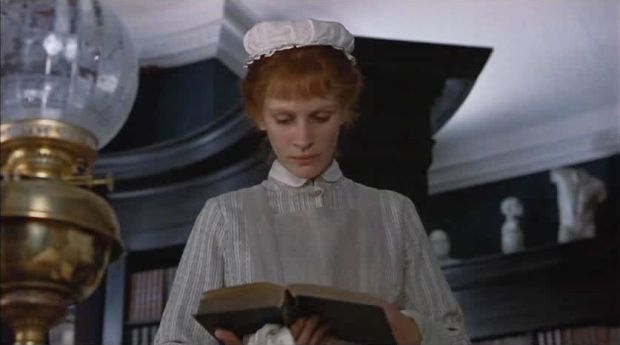 The emphasis on the visits of Hyde to brothels implies that evil or damage are rooted in the uncontrolled sexual libido of the male. Prostitution is a high-risk occupation that exists as a safety valve for a society that requires obedience and restraint. The respectable man that Hyde murders also has selfish appetites but, unlike Hyde, he is discreet. But sex is not the only destructive force identified in the film.  There is also the conflict that exists between ignorance and curiosity. Jekyll wants to understand the nature of man, and Hyde is curious about his appetite for pleasure. Both men are expanded by knowledge but neither they nor their appetites will prevail. Hyde uses his knowledge to wield power over others. Jekyll discovers insights that reveal guilt and conflict. The servants and neighbours may lack curiosity, indeed the truth of what happened is beyond them, but they survive and remain intact. Mary has knowledge that she did not have before and she will have to at least find a job to survive. More than that, as the final shot in the film makes clear, she will remember what happened to Jekyll and Hyde and how she felt. She cannot share in the ignorance of the others.

For much of the film Mary is an obvious victim and the film can be regarded as feminist criticism of men and their hierarchy. These women were not only dependent on male strength, power or privilege but also had to endure the oppression of men who failed to achieve the self-control and honour demanded by the hierarchy. Later in the film we discover that Mary is not merely a victim. Like Jekyll, she has to keep separate the moments that provide pride and respect from those that insist upon shame.   All the characters are, to some extent, like Jekyll and have to keep at a distance the memories that generate self-hatred. Poole the head servant is the biggest snob in the Jekyll household and, when his status is threatened, he can be cruel. But he also has compassion when there is tragedy. Both rivalry and camaraderie exist amongst the servants. But all, servants, masters and the rest of us, are obliged to distance themselves from the dark aspects of our natures and those dreadful incidents in our histories. By averting our eyes from past failure and transgressions we maintain an essential gap between self-respect and shame. Knowledge has its benefits but it forces us to look. As we understand more, the distance between what we like to remember and what we need to forget becomes narrow. This is the psychological threat that we spend most of our lives attempting to sidestep.

Howard Jackson has had five books published by Red Rattle Books. His latest book Choke Bay is available here. If you are interested in original horror and crime fiction and want information about the books of Howard Jackson and other great titles, click here.