The game of hide and seek has two virtues. Nobody has made any money from it as far as I am aware, and it serves as a neat metaphor for not just a ghost story but also our natures. We need to both hide and discover and when we hide we are always alert to discovery. As in the game played by children, we hide and seek at the same time. Neither is there a consensus about what should be hid or sought. This disagreement is both personal and eternal. It contributes to arguments and the breakdown of relationships more than is admitted. Nothing irritates us more than someone who will not let us hide or seek in the way we wish.   A film about suspected ghosts could be viewed as one long exercise in hiding and seeking. The titles that appear after the game of hide and seek in El Orfanato consist of wallpaper being torn from a wall to reveal the names of the actors and creators. This feels like a reference to The Black Cat, the classic short story by Edgar Allen Poe.   In that story the efforts of a murderer to hide his secret ensured its discovery. Poe understood that irony was only a gentle word for twisted fate. When they play hide and seek, children have the same problem as the murderer in The Black Cat.  Sometimes the best hiding places make it difficult to travel to where we need to go.

When El Orfanato was released nine years ago, it received a ten-minute standing ovation at its premiere. The response from the audience may have had something to do with native Spanish pride. The film is well made. It has a defiant bravura that challenges Hollywood. But ten years later the film feels more mechanical and contrived than we initially thought. Harsh critics might be tempted to say the final search is overextended and that it unbalances the film. The encounter at the climax is powerful and moving but Hollywood sentiment and music intrudes and mars the final few minutes. The coda at the end, although very brief, is nowhere near as clever as it pretends to be. El Orfanato is great when it borrows from Hitchcock but less impressive when it imitates or challenges Spielberg.

But El Orfanato is a superior and rewarding example of a horror film.   It has the Spanish virtue of being able to mix enjoyable clichés with original ideas, bold cheese and sly sophistication, poetical ambition and a lack of embarrassment about manipulation. Sometimes the clichés inspire the ambition and poetry. Laura and her husband attend a group counselling session for bereaved parents. This scene has been done many times but the parents in this session are old. They do not need to say anything for us to be aware that grief over the death of a child lasts a lifetime.

The direction by J A Bayona is slick, and he ensures that the required tension is taut. We imagine more will happen in the film than we eventually see but this is not a criticism. Bayona uses set pieces not just to thrill but also to provide warnings about a possible future. The two most unnerving moments in the film consist of a simple tap on the shoulder and something that the audience is prevented from seeing. The tap on the shoulder occurs as Laura, whose son has disappeared, entices the ghosts that she suspects exist inside the house. After the previous suspense the audience jumps. The something that we never see is the kiss of life that her husband gives to the victim of a car accident. After the failed attempt at resuscitation we see the face of the victim. The head and jaw has been torn open by the accident, and we realise that the poor husband has had to swap saliva and breath with something terrifying.   His blood stained lips and the accusatory expression the husband gives Laura stay in the mind for as long as does the monstrous damage to the victim.

The film has obvious sections, and most are distinguished by a key character or event. There is a lot of searching. A child disappears when he looks for friends, the adults search after the disappeared child, the authorities hunt for clues, Laura seeks an explanation, the paranormal investigators explore the house, and we all know what ghosts do.   It happens because people have responsibilities, are psychologically dependent on others, need something to keep themselves occupied, like to prove a point and, in some instances, are just curious.   The long search and a fair amount of skill by the filmmakers help the movie to progress on a path that includes inexplicable events, mysterious hauntings, surprising revelations and finally a confrontation of complicated consequence. 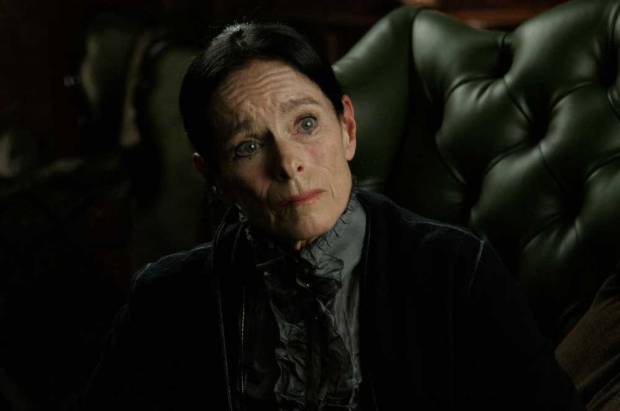 Two female actors dominate the film. These are Belén Rueda, who plays Laura the mother of the missing child, and Geraldine Chaplin who appears in a cameo as the investigator who has extra sensory perception. Rueda can be glamorous but in El Orfanato the glamour is kept under control. The clothes she wears are ordinary, the camera angles and lighting are not always flattering and makeup is avoided. Instead we have a compelling portrait of a mother made distraught by the loss of a child. Her response is shaped by obsession and determination. This leads her to discover strength and an inner resource but Laura never lapses into abnormal heroism like the family in Poltergeist. Rueda remains charismatic but she is a natural and strong presence. The character played by Chaplin is also wilful and it suits the English actress.   Chaplin is razor thin and wrinkled and looks like a woman whose existence is not quite within this world. She is creepy but her need to sidestep contentment is admirable and she redefines how we imagine warriors.

Some will interpret the film as being about faith. Laura carries a religious brooch around her neck but what happens to the brooch at the end of the film undermines any notions of the importance of faith. Instead the exploration within the film demonstrates how we all dispute what is the required evidence for valid discovery. The empirical is important but so is intuition. Both approaches require individuals who are single minded and determined. This clash could have been playful, especially as Guillermo del Toro was an executive producer for the film, but the actors are high-minded and give the film the required substance.

Children can be overused in horror films especially cute and winsome blondes.   The relationship between Laura and her child is not sentimentalised.   The dependency between mother and child is mutual but there is also conflict. Children and adults do not agree on what should be hid and sought. Parenting demands fresh discovery, a need to understand what is happening inside the head of the small creature that has redefined both the home and the family.   Despite the child having information unavailable to the parents it is them who will have to set the rules about secrets and discovery. Laura understands and, as she searches and discovers, she acquires added responsibility. We soon understand that Laura is not just capable of being a strong mother. Like Lillian Gish in The Night Of The Hunter, Laura has the resources to nurture and guard a flock. This is important because, for reasons that become clear in the final confrontation, the children in El Orfanato are obliged to abide and endure. El Orfanato is not glib. Discovery means that existence has to change. Without revealing too much it can be said that the climax in El Orfanato makes more sense than the final words by Lillian Gish in The Night Of The Hunter. The stress on the responsibility of Laura and the prescription of her narrow fate will not please all feminists but the film does facilitate strong roles for women. The men in the film are no more than dependent voyeurs. The obese paranormal investigator stays safe and watches from behind his TV monitors. The husband of Laura occupies himself with maps of the area where his son was lost. Compared to how Laura and Chaplin commit themselves and risk their health the men are timid. They are content to shape their lives from secure vantage points that preclude fulfilment and worth. The women understand that the authentic search for discovery can be the catalyst for either obsession or madness.   There is the promise of fulfilment but this means also submitting to unforgiving fate.

El Orfanato is a horror film, and the traditions of the genre are respected. The old dark house that makes strange noises is familiar. The house, though, is a reminder that we are obliged to do more than search and discover. What we create and construct will also have hidden secrets. Compared to the landscape around her feet, the cosmos above her head and the relics from the past like the house she lives in, the secrets of Laura will be modest. We all die. Our secrets and the interest of others will determine how our lives are remembered. Memories and mystery will remain for the curious to fathom. Whether they will be curious is another matter.

Howard Jackson has had six books published by Red Rattle Books including a collection of film criticism. His latest novel Choke Bay is available here. If you are interested in original horror and crime fiction and want information about the books of Howard Jackson and other great titles, click here.