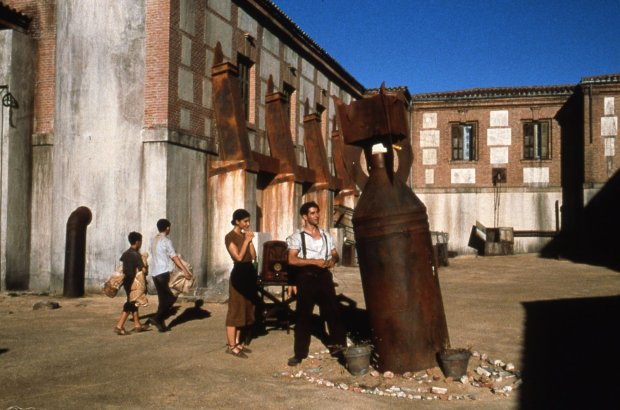 The bomb is unforgettable. It stands in the middle of the square inside the orphanage, nose buried in the ground. The metal shell of the bomb is rusted and brown, the same colour as the parched landscape that surrounds the orphanage but a darker shade. Jaime is one of the orphans and, because he is taller than the rest, he thinks he might be a tough guy. He tells Carlito, the innocent new arrival, that the ticking of the bomb is its heart. The bomb ticks like a clock. Rather than explode, it has returned to earth. The bomb is destined to continue and haunt memories. We listen to Jaime and think that perhaps the human heart is also defined by our sense of what time does to lives.

There are two ghosts in El Espinazo del Diablo. Santi is the orphan that was killed by orphanage caretaker Jacinto the night the bomb arrived. Jaime witnessed the murder but pretends Santi is still alive somewhere. The ghost of Santi warns Carlito of future destruction. Santi and the other ghost that appears later are preoccupied by the events of a moment in time. Unable to forget what has happened the hearts of the ghosts will continue to tick. 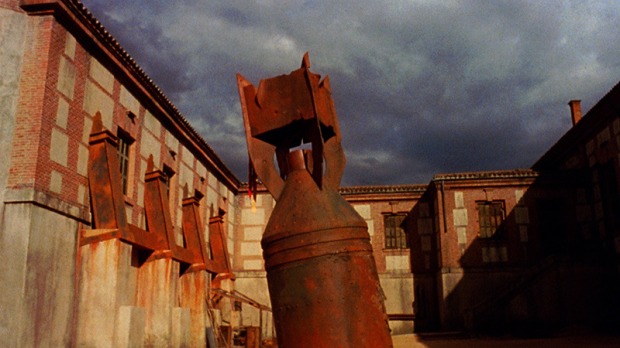 The director Guillermo del Toro was at his confident best when he made El Espinazo del Diablo.  It came between his two other great films. Cronus appeared in 1993, and El Labertino del Fauno followed in 2006.   El Espinazo del Diablo may lack the cohesive themes of Cronus or the daring imagination of El Laberinto del Fauno (Pan’s Labyrinth) but it is the superior film. Instead of complex ideas the film has a strong sense of its own life and world. Somehow the story lives for itself and, although there is impressive artistic invention, the viewer feels that the tale is driven by complicated characters. What we see in El Espinazo del Diablo feels inevitable and natural, events shaped by people unable to control fate because they are thwarted by history, others and unpredictable events. El Laberinto del Fauno brought del Toro the greatest success and acclaim. That film also had a strong sense of self but it is the inferior film. In El Laberinto del Fauno the imagination of del Toro feels like mannered gothic.

Touch and context make El Espinazo del Diablo a great film. The touch is supplied by the confident direction of del Toro. There may be less than meets the eye in El Espinazo del Diablo; indeed not all of it makes sense. The definition of the ghost at the end of the film is bogus. But what meets the eye in El Espinazo del Diablo is exceptional and considerable.  The tale is not just fantastic but fabulous. Loaded with surprises it is revealed in marvellous images that repeatedly suggest lives remote from our own. Memory may be important but the past is always different from the present and in El Espinazo del Diablo it is exposed as a prison. The days consist of endless and oppressive sunshine that reduces human struggle to absurdities in days that will disappear and be forgotten. The music is exceptional but also doom-laden, an unusual melody made sinister by the dominance of oboes and bassoons.

The context is provided by the Spanish Civil War.  The humans in the orphanage are flawed and lack power. The girl who loses her life in a defiant gesture may be standing firm on a point of principle but her death feels more like a consequence of misjudgement than heroism. There are other adults who lose their lives. The acts that cause them to die are inspired by a desire to protect others but none expect the fatal outcome. Heroic sacrifice happens but it is a consequence of chaos rather than bravery.

Jaime the aspirational tough guy has the potential to be as destructive as the evil caretaker Jacinto. He finds redemption in the group and through the help of the innocent Carlito. Each boy helps the other to accept responsibility and face a hostile world. But at the end of the film the sensible viewers will bet on the hostile world. The adults have not just the world but their inadequacy to worry them, temptation and failure nag. Carmen, the one legged woman that runs the orphanage, provides a needed home for the children but her libido obliges her to have sex with a young man she detests and to resist the love of the decent Doctor Casares. 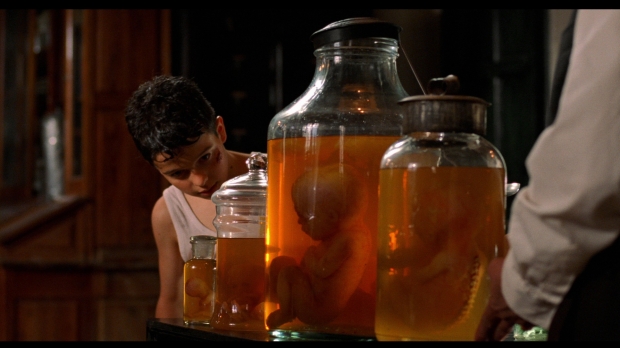 There are two uneven struggles in El Espinazo del Diablo. One struggle is the Spanish Civil War, and the other is that which divides human nature. Carmen keeps gold hidden in order to help the Republican cause. Jacinto wants the gold to satisfy his appetites and ambition. The struggles are uneven because the powerful and the selfish outnumber the decent and because human nature is complicated. The powerful are able to exploit the appetites of others and even the human need for rest and relief. Meanwhile human weakness and flaws undermine the decent and make virtuous lives difficult.   If we are flawed, we can at least pick the right side. The decent people in El Espinazo del Diablo support the Republican cause and do their limited best.  They believe in the group rather than the individual. Carmen teaches history to the orphans and describes the world when mammoths inhabited the planet. The children are baffled by how humans survived against such creatures. ‘In those days men had to act in groups,’ says Carmen. The two ghosts remain because they are committed to others. They will remember the group and continue to exist as guardian angels.

Jacinto the evil caretaker is responsible for much of the destruction in El Espinazo del Diablo. Jacinto inspires accomplices and, because he is handsome, devotion from women. He is described by Carmen as ‘a prince without a kingdom.’ Unable to commit to others Jacinto is driven by paranoia.  Ambition is his consolation.  It is clear that Carmen understands that the ego of Jacinto will always demand more and never be satisfied. The interesting question is what she means by ‘kingdom’. It could be status and wealth or the kingdom she imagines, a place where men have to act in groups, a place that will always be denied to Jacinto.

The makers of the Swedish crime series The Killing found the strength to add domestic drama to the detective plot because of their exposure to the work of their countryman Lars Von Trier. Brooding and angst were the bonus. The characterisation and attitude in El Espinazo del Diablo is influenced by the films of Luis Bunuel. The Spanish director identified flaws in both the rich and the poor. Although a moralist he also rejected religious piety and condemned it as nonsense. Doctor Casares is gloomy about the future. He understands that people are responding to war and hardship with fear and superstition. Good and bad are distinguished in El Espinazo del Diablo but the evil and the blessed are absent. The bad are unable to hear their human heart ticking and have misguided notions of what constitutes kingdom and enemies. The good are flawed and reduced by temptation and fear. Both good and bad people overestimate themselves. Luis Bunuel understood this as well as anyone and he was always willing to remind the human race of its limitations and delusions. El Espinazo del Diablo is as chilling and pessimistic about human nature as Bunuel but there is also advocacy. The resistance from the decent did not win the Spanish Civil War but it made a difference to some Spanish lives, and there were people that endured because of the help from friends. We may be limited and flawed but this only makes it important that we pick the right side to support and do what we can. In the Spanish Civil War the stakes for those who failed to do this were high, even those who thought that the victory of the Fascists meant that they had won. Del Toro preached this message in 2001, at the beginning of this century.  El Espinazo del Diablo deserves recognition for its thrilling moments but, in view of what now appears to await the human race this century, del Toro also has to be given some credit for his prescient advice.