The film begins as it ends, a plain black screen. The father hears the voice of his daughter on a recorded message. The inference is clear. The recorded message captures the isolation that can exist within families. The lonely voice suggests we are connected but disconnected. The darkness surrounding the disembodied words captures the feeling of helplessness that affects parents when they cease to understand their children, when kinship is subverted by the mysterious ambition of adolescents. George A Romero used the zombie genre to criticise American consumerism and capitalism. Arnold Schwarzenegger helped produce Maggie, and we all know what he thinks of the American dream. Maggie is a conservative film but no worse for that.

Rather than protest about the state of the world the film concentrates on personal and domestic drama. The film is not perfect. The first half includes the usual moral debate about what society should do about the zombies and most of this is uninspired. A very personal and moving tragedy dominates the conclusion of the film but before that Maggie feels slow moving and as if it is aiming at and missing profundity.   There are also some very convenient plot developments. What happens in the second half of the film allows us to indulge what we have seen previously.   Although the lines may be familiar the inarticulate characters are consistent. The lurches in the narrative take us to a logical place. The film becomes a stripped down drama in which the most important element is the relationship between an anxious father and a doomed and distressed daughter. Maggie has a splendid and very touching conclusion that should dry the throat of anyone. Zombies, more concerned about where the next brain is coming from, will probably be immune. 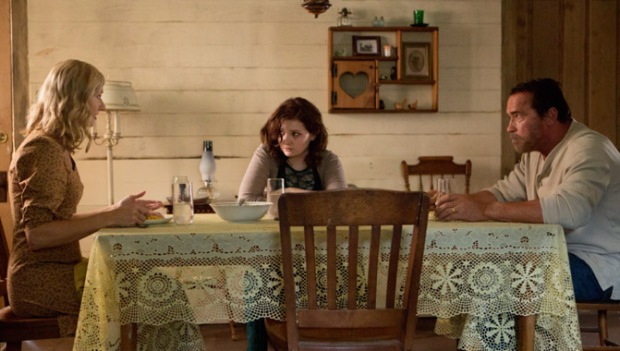 Concerned with the drama that exists within families and not the chaos of society, Maggie, because of the circumstances of its characters, defines society as nothing more than a collection of families and friends. The State is an organisation where some people work and set rules. In view of what Thatcher said about society the title of the film has a probably unintended political resonance. Wade Vogel manages a farm, and his notion of society consists of his daily toil and the neighbours on the surrounding farms. The family may define the world of the characters in Maggie but it is vulnerable. Death disrupts and redefines all families. An apocalypse means the wholesale loss of individual lives and simultaneous wreckage for families. Burnt landscape is the image we associate with the apocalypse. The familial wreckage is not as visible. In Maggie the damage to the land by the apocalypse is seen in images that are momentary. The wreckage within the family is more pervasive but not as tangible. 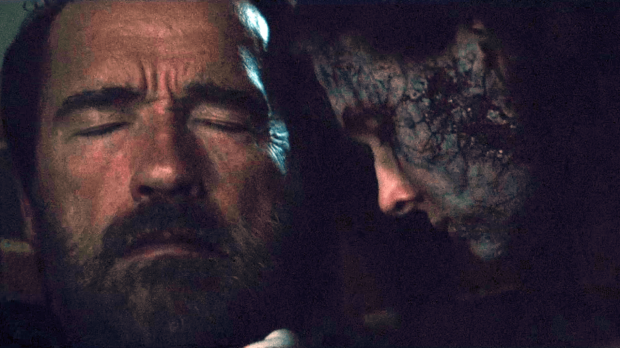 Schwarzenegger is not a perfect choice for the part of Wade Vogel. He looks old enough to be the granddad of Maggie Vogel. His bulk is physically absurd for a farmer especially in this age of mechanised agriculture. The performance of Schwarzenegger, though, is a revelation. No one who sees Maggie will doubt the suffering of father Wade Vogel. The performance of Schwarzenegger is restrained, which it needs to be, but emotional. He captures the feeling of weary and lonely incompetence that fathers feel when they are obliged to see the destruction of a daughter or son.   In Maggie his impossibly broad back becomes a burden, compressed and taut muscle-laden anguish. His body is a metaphor for the suffering of parents. At one point in the film Schwarzenegger says to his infected daughter, ‘I promised your mother I would protect you.’ Protection, though, is impossible. The progress of the disease will be inexorable, and his daughter will have her own ideas about the future. Society decrees that his daughter will need to be destroyed. This is what happens to the infected in a zombie film. Outside zombie movies the stakes are not as high but most fathers will understand the concerns of Schwarzenegger; the desire to ensure that daughters will suffer as little as possible, whatever the judgement and demands of society.

The details in the film to indicate the zombie apocalypse are modest and familiar; an empty landscape weighed down by a soft grey tint and abandoned supermarkets. But there are effective moments such as the father telling his daughter not to pick at the scab, Maggie picking a pair of shades without worrying about the price and later putting nail varnish on the fingernails of a hand she will soon see rot. Sniffy critics might say that because the film is perched between domestic drama and zombie movie it succeeds as neither. Seasoned horror fans will wonder where the hell the zombie hordes are supposed to be. Those less interested in the genre might complain that the zombie context weakens a heartfelt and serious drama about a father obliged to watch his daughter die without realising her potential.   There are two encounters with zombies. Neither involves heroics but these scenes should be sufficient for sensation seekers. Indeed, not having to witness a plague and overdone CGI effects provides relief. A serious drama without zombies might have been more of a challenge for the filmmakers both in terms of delivery and making a profit. The zombies, though, strengthen the metaphor.   Wade Vogel may have an unusual life as a remote farmer and live in extreme times but we identify with his character and recognise and share his anxiety, our inability to protect children who become adults.

Maggie may have little blood and violence but no one should doubt that it qualifies as a horror film. The zombies and the reduced society are sufficient context for purists. More important, Maggie deals with tragic despair and not gruesome fantasies and adventures. In Maggie we observe the emotional desolation that members of families have to endure when death waits for someone. The horror is caused by the inexplicable changes in people we love, their deterioration or death and our inadequacy in dealing with their pain and suffering. Our love has limited potency, and our warnings are inarticulate. Both parents and their offspring experience death within families. They are either the observers or the deceased. Either way they are victims. The sensible realise that, although we have no choice, we are always culpable when those we care about suffer.   Maggie reveals how little action and horror films deal with what really worries us. 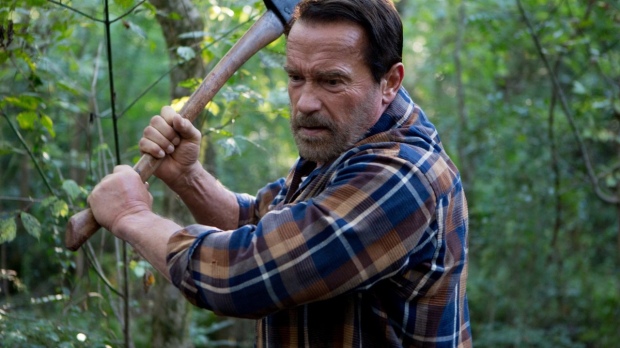 Maggie may be a simple tale but it is not glib. A viewer will have a strong sense of how the tragedy and the suffering pull father and daughter apart while increasing the dependency. The obligation to lead different lives and accept alternative destinies fractures the relationship between father and daughter and weakens the trust that both have in the other. This obligation occurs with or without death. Time is also cruel. Father and daughter in Maggie will feel for each other but, before death arrives, both understand that they have let down the other. Maggie knows that she will have to endure pain and that her death will sadden her father. She feels responsible because she was unable to live the full life her father expected. Wade feels he failed to protect someone he loved. Maggie wanted to die alone and with as little as shame as possible. She returned home because she has to acknowledge the efforts her father made to find her, his two week search across the zombie affected wasteland.

The relationship of the teenage boy to Maggie is not a strong element within the film but the kiss between two infected teenagers destined to die after becoming monsters has real poignancy. Not as much as what follows but it is important. The kiss is tentative, as if the participants expect it to be unsavoury. Viewers might share the same misgivings as the kissers. If they do, they will soon feel ashamed for thinking that way about the innocent intimacy. This is subtle filmmaking. Maggie can be forgiven the compromises that exist in the narrative and the self-serving short cuts. Maggie has emotional power and a heart. Viewers should stay the course and resist early exits or flicks on the remote control. After all, the ability to endure and stay loyal is what makes humans worthwhile. Our flaws may be considerable but the capacity to endure through at least a life is our privilege. And we do not have too many of those.