Hell Or High Water has a familiar feel. We have seen wide spaces and dusty one-storey towns before and our ears recognise fractured dialogue. The film is a Western thriller or a modern Western. In Hollywood in the past, scripts for Westerns would be rewritten as thrillers and Westerns would become thrillers in the same way. A modern Western, as No Country For Old Men demonstrated, can have the best of both worlds. This has confused people. Hell Or High Water has collected awards but the film critic Roger Ebert dismissed the film as failed Cormac McCarthy. That author has had some supreme moments but he does not need imitators to become acquainted with failure.  The literary output of McCarthy has mixed the great with the banal.

In No Country For Old Men the characters struggle to understand a changing world and West. The avenging villain is a metaphor for fate. He is both unpredictable and inexorable. He will triumph because of his responsibility to the future. More important than that the villain knows restless and ambitious humans will oblige him to bring suffering. Hell Or High Water can be viewed as a riposte to No Country For Old Men. McCarthy argued that the future we think we create will contain surprises and chaos beyond our understanding. Human beings can have confident purpose but fate is malevolent. There is virtue in the past, and history deserves respect. In Hell Or High Water the past is something to beware. In at least three scenes cowboys and horses appear alongside automobiles. The past offers no opportunity for redemption. It always consisted of facile winners and less than noble losers. The world changes, and myths and notions become stale and are no longer useful. As the Native American says to his sheriff boss, ‘They don’t do it no more.’

In both Hell Or High Water and No Country For Old Men the characters are tight lipped and inarticulate. Everybody, though, has to talk about something at some point because you can only do so much with photography. Waitresses understand how the world operates better than most, which is maybe why they grumble so much. Working for more than half the week just to pay the mortgage they wonder what the hell ever happened to their hopes and the legacy of the American Dream.  The Native American deputy understands.  150 years earlier his people were moved off their land and out of the way because the rich wanted to make more money. Now the same thing is happening to the cowboys.   But instead of the cavalry the modern rich use sub-prime mortgages. ‘Those boys are on their own,’ says the Sheriff. The system looks after the rich and not the poor.

The story is this. Two brothers decide to become bank robbers. Their mother has died, and they need money to stop the bank taking possession of the property. The only money available to them is in the banks that will reclaim their mortgage.   The two brothers rob the banks that intend to foreclose. This conviction about the need to recirculate money and surplus capital is what sustains modern high finance. The difference is that the two brothers are not rich and powerful. They begin the movie capital free and desperate. The four bank robberies in the film are brief and low key but they all have memorable moments. My favourite occurs when the bank teller looks away from the computer and sees a gun barrel pointing at her face.

The photography in Hell Or High Water captures grand landscape images, and the characters have Western laconic appeal. Hell Or High Water is stylised and it evokes other movies. No Country For Old Men will be obvious to most but there are also references to Lonely Are The Brave, High Sierra and any Jesse James movie. But Hell Or High Water has more than mere appeal for nostalgic cineastes. Even without the political context the characters would have convincing authenticity. We follow them to what are believable conclusions. The wise guy and competitive sheriff just has to know what has happened and for others to know that he knows. His nature obliges him to taunt his Native American partner. There is no malice in his behaviour, or so he thinks, but somebody has to be top dog in any relationship. The wild brother adds to the chaos, and lives are lost or wasted. 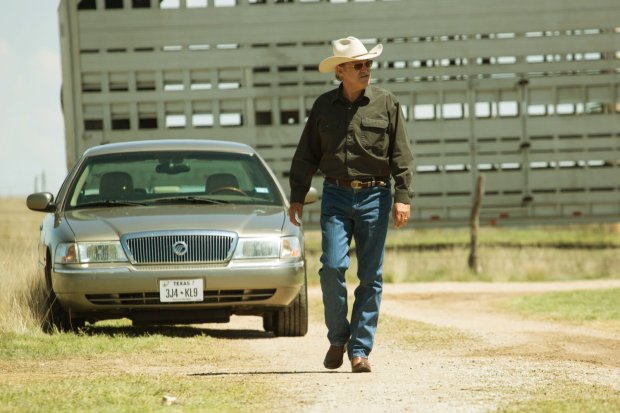 Hell Or High Water has some false notes. In a movie that presents an authentic America these notes jar. The highway shootout between the wild brother and some townspeople stretches credibility but it is consistent with the character of a man who has a need for defiant heroism and who has had enough of lopsided power. Jeff Bridges is no more than okay as the old sheriff anticipating retirement. Bridges is a fine actor and he is more effective in Hell Or High Water than in True Grit. But he still struggles with Western heroes. Jeff Bridges has said much about how he based his Texan sheriff on a real character. Perhaps but he overdoes the charisma. When he walks away from conversations, he makes a gesture that rock stars use when they leave the stage. In a film that is stylised but attempts to portray authentic working class life this invention by Bridges is misplaced. He also borrows from the performance of Marlon Brando in The Godfather. Bridges, though, is not the first or last to borrow from Brando. 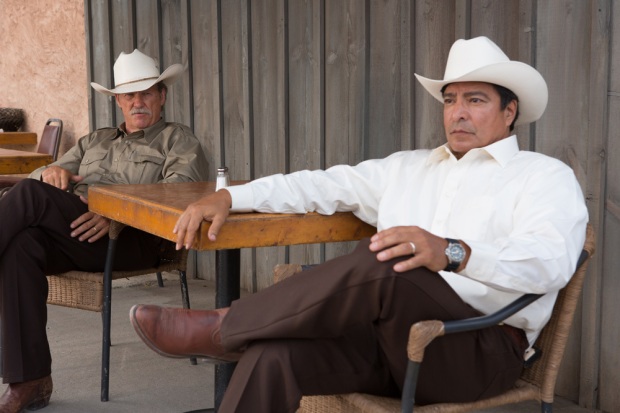 But even with the occasional false notes Hell Or High Water has superior authenticity. It represents American working class life in a way that only used to be seen in left wing documentaries and it trusts its characters to reveal the story. No Country For Old Men may have intelligence and a powerful metaphor but it lacks the convincing realism of Hell Or High Water. This can be said even though Hell Or High Water has stylised photography. The film is real when it matters. The characters are recognisable. They manage to be both sympathetic and repellent.  Their relationships dominate the plot and the film. Not everyone in the audience will select the same hero or share the same sympathies.   This is a real strength. Whatever Roger Ebert says, the script avoids calculation and formula. At one point the two brothers listen to the Waylon Jennings country hit You Asked Me To. The song illuminates how relationships can survive hostility through dependency and responsibility. This is how the white Sheriff and the Native American Deputy tolerate each other and why the two brothers are risking their lives for the other. 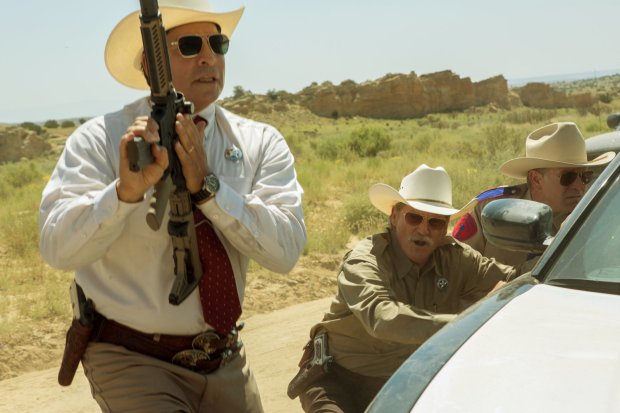 Chris Pine is a James Dean lookalike and famous for the glamour he brought to the recent Star Trek movies. At the beginning of the film he is shabbily dressed, has hair that is out of control and stubble. He also appears to have lost weight. Despite the perverse grooming Pine will never be a plain man. His glamour, though, only emerges at the end of the film when his character has the prospect of money and economic security. Pine talks about the disease of poverty and how it can infect a family for generations. The dialogue may have been inspired by a conversation that Elvis Presley had with a journalist in the 1960s. Elvis was more revealing than normal and he impressed the journalist who was convinced he recognised undiscovered intellectual potential. The journalist suggested that Elvis, now that he had wealth, should go back to college. Elvis replied. ‘I ‘spec you never been poor. We Presleys have been poor as far back anyone remembers.’ In Hell Or High Water the two non-submissive working class males decide to rob some banks. Elvis settled for Hollywood and ridiculous contracts.   The dream for the poor is consistent but the actions of rebels will be inexplicable to those who have guaranteed comfort.

Hell Or High Water ends with a welcome innovation.   Instead of predicable white titles on a black screen we see black titles roll over a low level shot of a field. Not only this is more pleasant on the eye the black titles suggest future gloom for not just the American people but also the land and its imagined promise.