Fritt Vitt is the original title, and to English ears the words suggest cold weather. In fact they mean open season. That makes more sense than the translation adopted for this Norwegian shocker. The film took two years to make and nine months to edit. Most of it was filmed near the top of the 8000 foot Norwegian mountain Jutenheim and in deep snow. The photography has fine moments, there are some splendid views and two years and nine months qualifies as care and attention.   Using an abandoned snow lodge as a substitute for the old dark house is also a novel idea. The film won awards and had enough box office success to inspire two sequels. WWE, a movie company based in Los Angeles, has purchased the option for an English language version.

Fritt Vitt is okay and most of it is well made and well played. Overcoming the logistical challenges required ambition and determination.  Such efforts deserve praise, and the film is entitled to the success it has had. The script is not without thought but it could have pushed its ideas further. So-so in the snow-snow is a cheap joke I should be ashamed of but it describes the film quite well. Perhaps the genre is overcrowded.   Too many teenagers or adolescents have perished inside abandoned and mysterious rooms for us to be that concerned. If we swept up all the redundant pimples, there would be a storage problem. The consolation for teenagers is that they are able to discover bedrooms as untidy and as dirty as their own.

Fritt Vitt reinvents Hansel And Gretel, which ensures that there are not many surprises. The references are interesting, though, and they are enhanced by the appearance of that old favourite, the abominable snowman. Hansel And Gretel was important because it alerted us to the existence of both guilty and innocent slayers.  The folk tale depends on the ability of the children to tempt the evil witch and play tricks. Fritt Vitt has slick and frenetic action that took nine months to edit but it is also a reminder of where the horror tradition began and its small-scale roots. The need for sustained action means that Fritt Vitt has more doors than Hansel And Gretel. Most of the time the doors foil the killer or at least delay the slaying. But, as in most horror films, opening a door is a bad idea and, no matter how much we groan, it happens. Even the crevasse at the climax of the film is a kind of door. It ensures that someone will survive but also permits a clever ending that is both poignant and thoughtful. The audience is obliged to think about simple-minded definitions of victim and abuser. Survival involves impetuous decisions, ill-informed action and misunderstood responsibility. All that has to leave a legacy.  Wilful survivors pay a price and have complicated memories of their participation in abuse. 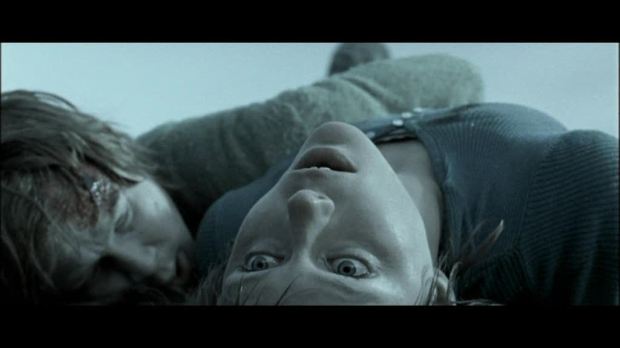 Fritt Vitt begins with media coverage of the mysterious disappearances of people in the mountains. The editing in this section is fast. The newspaper headlines are momentary, and clips of newsreaders last a couple of seconds.  It appears that the media have only one message to communicate; a lot of people have disappeared in some place in the mountains. Within the editing, though, there is a brief interview that sets up well the twist and punch of the final scene. This is clever and it anticipates the subsequent craftsmanship in Fritt Vitt. The photography is barely a stage removed from colour and it creates a suitable gloomy mood.   The soundtrack moves quickly between effects and music.  There is, though, too much noise. We should always fear the worst when we hear a choir amongst the strings.  Fritt Vitt to succeed needs to make an audience jump. It does but only just. The folk wisdom amongst horror moviemakers is that the movie should always be silent before the shock effect. Inevitably this happens in Fritt Vitt. No director breaks this golden rule. But, because these are the only moments in the film that do not have a soundtrack, the silences prepare an audience rather than prime it. The shocks can soon be anticipated. Fortunately the heroine is sympathetic. Ingrid Bolsø Berdal plays the resolute Jannicke. She is boyish, and her face is more round, but she has a look of Sigourney Weaver.   It helps us to believe in Jannicke, and after what happened to Weaver some distance above the peak of the Jutenheim, we want her to survive.

As in The Birds by Hitchcock, the besieged humans of Fritt Vitt are not ready to face the inexplicable. An inability to commit to relationships or risk love makes the characters in The Birds vulnerable to attack.   The five young friends in Fritt Vitt have the same weakness.   At the beginning of the film there appear to be differences.  Mikal and Ingunn neck throughout the journey to the mountains, Jannicke and Eirik note the necking and think about their own relationship, and Morten is the man alone who pretends that his sexual failure is not important. The mountain they climb feels like a symbol, something that represents commitment and a desire for discovery.  Some in the group are more confident than others and find the mountain climb easier but none have a desire for real discovery. At the top of the mountain they pause to be awed by the view but have no interest in exploration. Instead they spend the afternoon snowboarding down the mountain.   The soundtrack surrenders to modern rock music.   Adolescent thrills rather than knowledge and experience are what interest them.   For all we know they may be wearing earphones.

Earlier the group have claimed superiority to skiers who visit the obvious tourist destinations. After watching the five people snowboard down the hill these words lose conviction. We suspect that the people in the group are wary of other human beings and even each other. Ingunn may have a taste for exhibitionistic snogging but she does not want to have sex with Mikal. ‘I want to get to know you,’ says Ingunn. One look at the young face of Mikal and you wonder what there is to know. Jannicke and Eirik debate without enthusiasm whether they should live together. Morten the lone male in the group has broken a leg snowboarding the mountain. He is the voyeur and sexual impotent pretending to be the happy comic in the group. Surviving the attacks from the psychopath requires people making commitments to others. These do happen but the results are not always positive. In The Birds the growing commitment of the group and their tentative acceptance of the price of loving someone helps them prevail. This thematic rigour is absent from Fritt Vitt. Survival appears to relate to the ability to be lucky and have ideas. As in the overrated Alien, the photogenic go to the front of the queue.

The return of an abominable snowman is always welcome but the chap does have baggage that limits him. The ultimate revelation is satisfying but it means that the psychopath can only contribute to the violent confrontations.  Before that final moment we watch a silent figure swathed in snow gear and goggles.   The abominable snowman is human but it makes little difference to the film other than in the final moments. Fritt Vitt would have been improved if there had been more human interaction before the slaying begins. The tentative exploration between the couples is interesting but the film needs genuine conflict between the characters. By the end of the film we are involved in the survival of the lead characters but the others are dispensed before they become either interesting or sympathetic.

But two years and nine months requires us to be something other than sniffy.  Fritt Vitt inspired two sequels and honours a popular genre. Norwegian critics are proud of the film and probably should be. There is a lot of technical skill, and Jannicke is an appealing female hero.   The snow and the snow lodge make the movie different, and the willingness to reinvent Hansel And Gretel reveals a confidence that has to be admired.   There are few people who have seen Fritt Vitt who have not felt obliged to seek out the half-decent sequel.