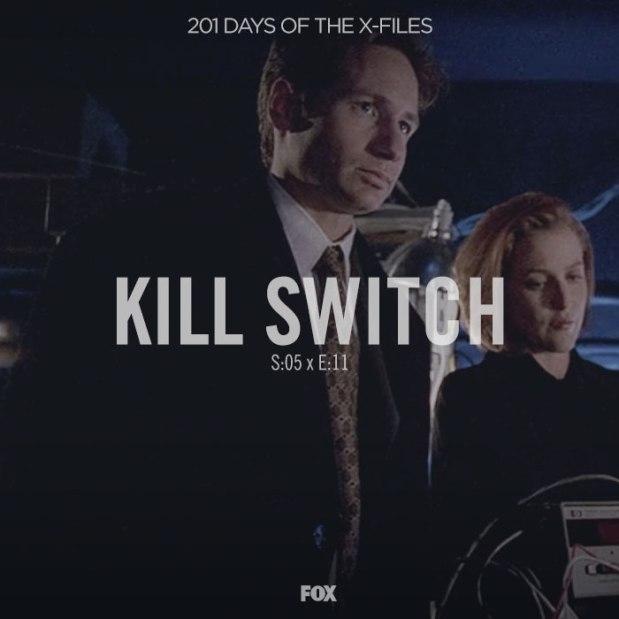 In 1999 The Guardian newspaper described William Gibson as ‘the most important writer of the last twenty years.’ Able, different and interesting he is, most important he is not.  His 20 novels anticipate the future and how technology will define and reshape human beings. Neuromancer was his debut novel and it became so popular a genre called cyberpunk followed. This was dominated by self-destructive and tough talking IT geeks fighting really powerful people. William Gibson invented the term cyberspace. For ‘most important’ it might be wise to read really cool. Twelve months before The Guardian attempted to appeal to the vanity of Gibson and turn his head the cyberpunk Godfather helped to write an X Files episode called Kill Switch. Is it the most important in the series? Probably not but the presence, imagination and authority of Gibson added spark.

Vince Gilligan is famous for writing Breaking Bad, which, if not the most important American TV series ever, is the most entertaining. By the time Kill Switch appeared Vince Gilligan had progressed from X Files scriptwriter to supervising producer. Not only was he supervising producer for Kill Switch he also wrote the script for Bad Blood a vampire spoof that appeared the week after Kill Switch. Both are available free on Amazon Prime. Without any interruptions required from the remote control the two episodes can be watched back to back. 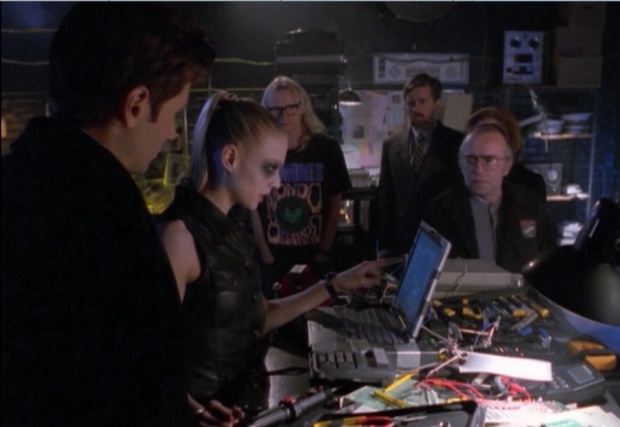 Last week readers of The Guardian were told about the phenomenon of transhumanism.   The notion is a simple one if dotty.   Transhumanists reckon that human beings will soon be able to continue beyond death and exist as digital memory. Who needs heaven when there is cyberspace and never ending pretend football on the latest upgrade of FIFA on PlayStation? Gibson has been having these fantasies for most of his life. The nerds in Kill Switch have not yet invented memory sticks and they do not even have smartphones but they are confident they can transfer their brains on to a server somewhere.   Gibson regrets failing to anticipate the arrival of smartphones but at least he is out there thinking what the truth might be. In the Kill Switch episode cyberspace is not monster free. Thanks to military weaponry there is a territorial and malevolent artificial intelligence that defines digital invaders as enemies that need to be destroyed. Well, imperialism does leave its mark. As the enemies perceived by the cyber monster are not that long past using floppy disks, it all feels a little unfair. Computer nerds are famous for being impetuous and insane but even by those standards the female programmer in Kill Switch is extreme. She has the weirdest eye make up, lives in a storage container, thinks saying the odd phrase in Spanish is somehow amusing and has adopted the name Invisigoth. Gibson may have been cool at creating words for the future but he was not great at puns. If The X Files had been on cable, Invisigoth would have cursed like someone from The Wire. Instead she is just angry and contemptuous. This woman is not a party animal. 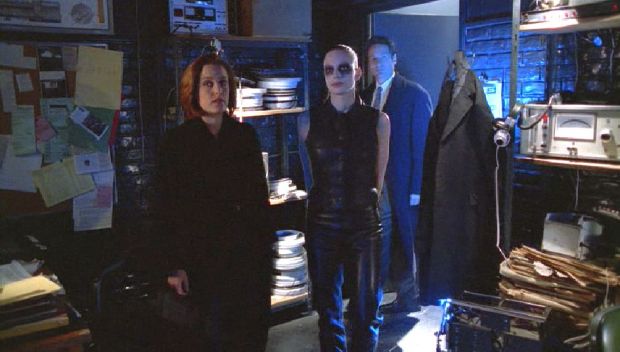 Much of The X Files series is nonsense, and a lot of the dialogue is terrible. Bad Blood escapes the awful exposition that exists in other episodes but Kill Switch is marred a little by the unnecessary explanation at the end of the episode. Nevertheless, both episodes are essential and they need to be implanted in the imagination before that fateful trip to cyberspace that we may all make some day.   There are additional compensations for male viewers. Kill Switch has three sexy nurses who want to play. Admittedly they are too quick to consider amputations but for those moments when FIFA 17 palls these girls have possibilities. Back in 1998 the presence of three provocative and sexy nurses on widescreen televisions would have left marks on the imaginations of male adolescents. The brains that these now middle-aged men hope to take into cyberspace may already be corrupted and dazzled by digital dust. 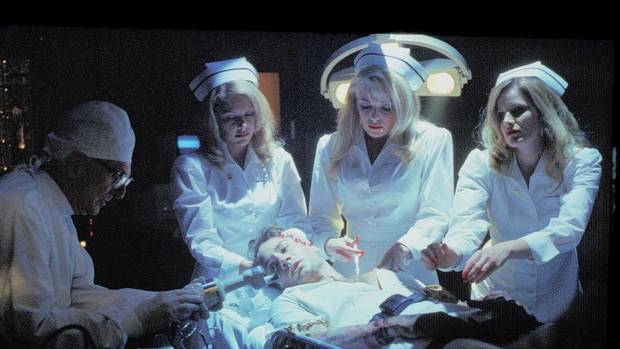 Kill Switch is the digital virus built to destroy the cyber monster. More happens in storage containers than we realise. The necessary computer code is contained on a CD that plays Twilight Time by The Platters. The importance of this doo-wop bonus should not be underestimated. Scully and Mulder do their best but at the end of the show there are no guarantees for the human race. The future is ominous. The next generation plays American football but artificial intelligence waits and watches. Since the episode was shown the American military has developed software that can invade computer code in the nuclear weapons of other countries. Iran has lost a few very expensive nuclear weapons that way. At the moment the malicious software is doing what it is told by the Americans.  But wait until it finds out about transhumanism. 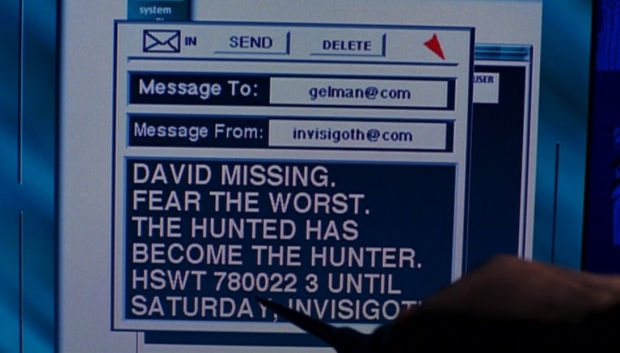 The X Files finished the last century as an acceptable subject at dinner parties. This century its reputation has suffered. In 2016 the series was reprised. The new shows attract viewers but are poor.  The two lead actors look as if they want to be somewhere else and talking to someone different. The X Files belong to Fox TV and that means Rupert Murdoch is in there and making money.  Right now he is wondering how to add noise and right wing propaganda to cyberspace. Perhaps the idea of eternity with the digital memory of Jerry Hall might not have the appeal he first imagined. Left wing critics of The X Files argue that it suited Murdoch to have anti-establishment thinkers diverted towards the UFOs in the sky.  Part of the appeal of the show is the relationship between Scully and Mulder. She is the rational empiricist, and Mulder has faith in his emotions. He is the gothic alternative to impartial science. The critics of Murdoch allege his purpose is to have ordinary people believe social problems can be decided by trust in emotions rather than in analysis that reveals the disparity between opportunities and income. The view deserves sympathy but The X Files, for all its faults, is where the renaissance in American television began. It brought high production values, dark photography and a superior sound for modern televisions.   And at least it was daft rather than smug.

Bad Blood is memorable for various reasons. The script by Vince Gilligan is witty and sly.  A box in the morgue is marked ‘Human Head Remains Handle With Care.’ Almost as important Scully reveals that she has a sexual appetite.   Something happened in the fortnight that produced Kill Switch and Bad Blood. The X Files acquired an erotic edge. It soon faded which makes sense.   Scully and Mulder were overworked FBI agents who had to fight a weekly monster while battling a nationwide conspiracy to conceal interplanetary rivalry.  Donald Trump has promised to slash taxes and the public sector. Somebody needs to tell him about the workload that Scully and Mulder have to endure. 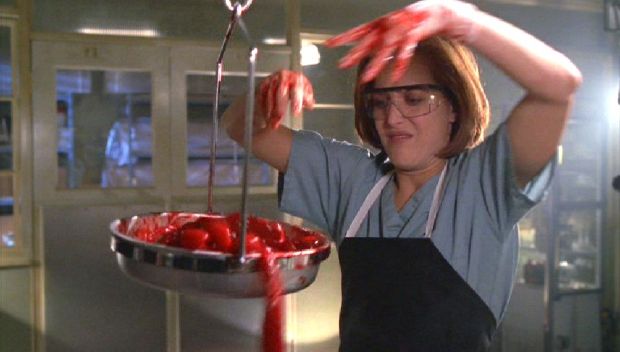 Bad Blood is a vampire spoof. Although the wit exists and there are a couple of sharp remarks some of the humour is laboured.  We can, though, depend on Gilligan to launch original ideas and enhance them with inventive detail.  In Breaking Bad he perfected the art but in Bad Blood the talent and promise are evident. Gilligan knows how to entertain an audience without patronising them.  This may explain why on this occasion the plot goes nowhere. The complicated involvement of Scully and the fate of Mulder lead to an ending that is bold but not smart. Rather than original it feels like a shrug of the shoulders from a scriptwriter. The revelation to Scully about the unknown vampire is no surprise.

Bad Blood has become a cult favourite because it nods towards Rashomon the 1950 Japanese classic by Akira Kurosawa. In that film the tale of a murder is told by different characters. The versions told are self-serving and contradictory; narratives are repeated. The same thing happens in Bad Blood. Scully remembers Mulder being a nuisance in her motel room, and Mulder recalls Scully making a fool of herself with a handsome policeman that Mulder is convinced has buck teeth. The actor who plays the policeman does a decent impression of Jack Nicholson but he is better with normal teeth, as are the vampires. There is actually an invisible narrator in the episode because Scully switches from giving an account to Mulder to reading her official report. The language changes without warning. I am not sure if this is clever or sloppy. But, after the achievement of Breaking Bad, Vince Gilligan deserves the benefit of the doubt.