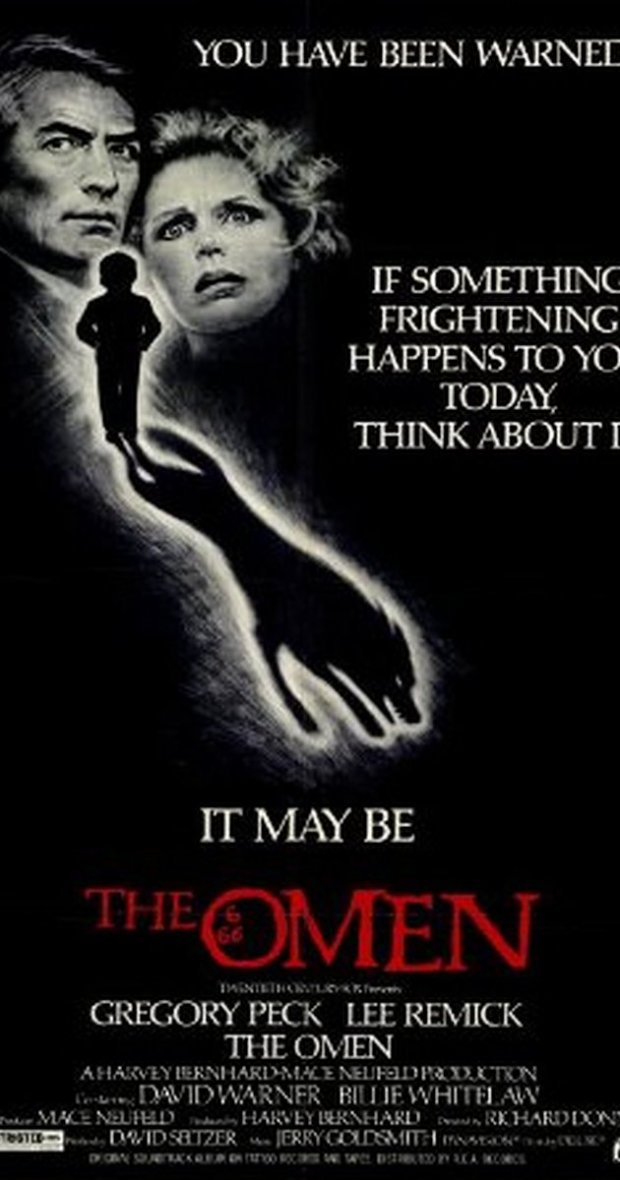 It all went to plan. Prior to The Omen being made two heavily publicised horror films had made a lot of money. These were The Exorcist, definitely horror, and Jaws, almost and could have been horror. The publicity campaign for Jaws exaggerated the coastal threat from sharks. The publicists behind The Exorcist pretended that their film set was haunted by a malevolent spiritual presence. Add a few bogus faints in the cinema audience, and in came the cash. The people behind The Omen saw an opening. The trick, they reckoned, could be repeated. Hollywood executives hired people who could be relied on to be professional or to take the money and hold their noses. The Exorcist is overdone but it has psychological roots in male anxiety. The film aims for authenticity and substance. We worry about what might happen next. William Friedkin directed The Exorcist. Friedkin is an unpleasant individual but his films are not without merit. They offer a dark view of society and people. The Omen is mired deep in Technicolor escapism and is so artificial it looks like it belongs to a time before Jaws and The Exorcist were conceived.  Gregory Peck and Lee Remick play the married couple that unwittingly adopt the child of the Devil. Peck was 60 years old and Remick forty.  Soft focus, warm filters and telephoto lenses are used to soften the wrinkles of the actors. The problem is that everything else is smoothed into chocolate box fantasy.

There are three sudden deaths, nobody dies from a shortage of breath in The Omen, and there are two suspense scenes. The sudden deaths are memorable. None of the set pieces, though, have the impact that they should. The fight between Peck and the crazed nannie does not convince because the editing is poor. The grave opening sequence takes place in an obvious studio set, and the soft focus is misplaced, but it does at least invoke traditional craft. Those in the audience who like to giggle at horror films enjoy The Omen. The artificiality provides safety and comfort for voyeurs who like to feel superior. 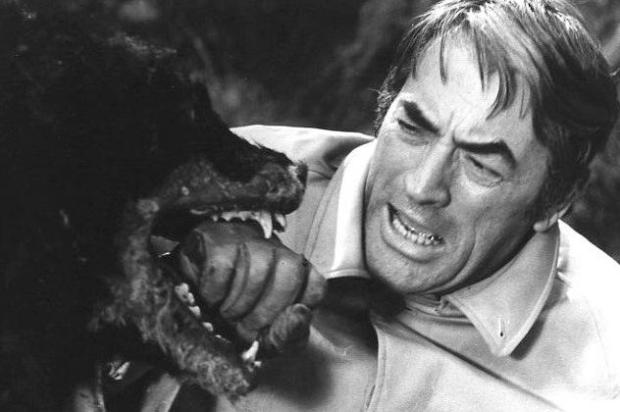 The Omen grossed $61m. Before we despair of the human race we should think about the publicity campaign and how expectations had been inflated by The Exorcist.   Gregory Peck was the third choice for the diplomat who welcomes the child of the Devil into his home. The part had previously been offered to Charlton Heston and William Holden. Both dismissed the script as cynical trash.   Almost in his sixth decade Peck wanted to work. He accepted a reduced fee plus 10% of the gross. Word gets around in Hollywood especially when it concerns money. William Holden agreed to appear in The Omen 2, and Charlton Heston made The Omen lookalike, The Awakening. The tale about the actors and the power of money makes people smile which is something because there is no humour in The Omen, neither irony nor sly jokes. They were not needed. Bogus theology and mechanical thrills inspired Dan Brown readers years later. The formula has mileage.

Damien the child of the Devil is a disappointment and an anti-climax after what must have been a fraught journey from Hell.  Possibly because of privilege little Damien is indolent. He has an unpleasant stare but apart from exciting a few baboons in a Safari park it is inconsequential. Rather than look like the Devil the child is similar to someone who might grow up to be a right wing Tory minister, someone like Oliver Letwin. Such people are not scarce but they are not all related to Lucifer. Being smug, self-serving and not giving a damn about anyone less fortunate is not quite the same as engineering an apocalypse so that evil can triumph. Saying that and thinking about Tory Governments, I am having second thoughts. It is best expressed in another way. The audience had a right to expect more from the kid.

Billie Whitelaw plays the nanny who replaced the suicidal predecessor that nobody talks about. Whitelaw is a talented actress who is often convincing. In Frenzy the penultimate film by Hitchcock she keeps her voice under control but blisters her husband with scorn. Samuel Beckett, who everyone can agree had high standards, once described Billie Whitelaw as his favourite actress.   She played the disembodied mouth in his 1972 play Not. The rest of her body was covered in a black cloth so that all the audience saw was the mouth communicating the anger and despair of someone who had suffered a mental collapse.  It sounds like a demanding part for an actress because it was.  Possessed nannies Whitelaw could do in her sleep, which is just what Whitelaw did in The Omen. There is not one instance of wit or invention in her performance.  No one should blame her. Parts in avant-garde theatre and working with an Irish genius offer worth but are little help with the rent. The Omen project was designed to make money, and we can imagine the cynicism she would have witnessed on the set. Richard Donner, who directed the film, spent a career in pursuit of box office and avoiding adding anything personal in his films. His efforts are best described as calculating. The numerate have their virtues, and films need to recoup their considerable costs.  No one who merely wants to entertain an audience deserves criticism. The ambition involves a desire to communicate. It is not the same, though, as only wanting to make money. The Omen disappoints because it has such a low opinion of what an audience will find entertaining. As H L Menken said, ‘nobody ever lost a dime by underestimating public taste.’ Not everyone who worked on The Omen would have agreed about Christianity and the Devil. Catholics would have brushed shoulders with atheists. They were, though, all agreed on one thing.  They all wanted to put cash in the bank.

Gregory Peck was losing his good looks when he appeared in The Omen. He is merely distinguished.  Peck is best on screen when he is being himself, impressive and packed with integrity. He was good in The Big Country as the pacifist hero and unforgettable as the decent lawyer Atticus Finch in a fine adaptation of To Kill A Mockingbird, the wildly overrated novel by Harper Lee.  The actor was less good as ordinary dopes.  Peck was the admirable and resolute liberal that J Edgar Hoover regarded as the greatest threat to his authoritarian rule. The Democrat Party wanted Peck to be a Presidential candidate. But Peck had limits as an actor. It was not entirely their fault but both Peck and Lee Remick failed to communicate the strain of living alongside a diabolical intruder.   Male fear of female independent authenticity made The Exorcist compelling. The paranoid vision of Friedkin was that under the social grooming women are just as nasty and as scatological as men. Parenthood can also reveal unpleasant surprises. Children will eventually become adults, and the results are unpredictable. None of this is captured in The Omen, which is hardly surprising. The sixty year old father and a forty year old mother are unbelievable and live in chocolate box affluence.

The Omen strikes the wrong note from the opening credit. The titles appear next to an image inspired by The Exorcist. A single figure is surrounded by darkness. The shadow from the figure consists of a crucifix. Bob Dylan lost all sense of geometry when he wrote the song All Along On The Watchtower. Nobody walks along a watchtower and observes normal rules of gravity. And neither do sinister figures have shadows that are religious symbols. If the image is meant to indicate the split between good and evil and the mixed loyalties and affinities that exist within us all then the draughtsman picked the wrong film. Damian tempts nobody. This is hardly surprising. The brat looks like Oliver Letwin. Years later Harvey Spencer Stephens who played Damian was arrested for thumping two cyclists. Harvey packs a punch, so the repeated comparison with Oliver Letwin is a little unfair.

David Warner is interesting as the journalist. In the opening scene he is superior, aloof and strange. Later he becomes serious and purposeful. The two characterisations are contradictory but somehow they mellow into someone interesting. The loss of his head inspires mild regret.  Much has been made of the decapitation of the journalist. Technically this was an achievement for 1976 but the scene is unconvincing. We all know what is going to happen as soon as we see the pane of glass. The slayings in The Omen either involve distance or height.  It suggests a remote force but it also means our involvement is limited.  As the adoptive mother of the child of the Devil, Lee Remick is the woman who just has to have a child.  In the horror scenes Remick keeps her eyes open and sometimes struggles for breath. Because the director and producers are only thinking about money, it suffices.

Much is absurd. Peck resisting an abortion of a second child that is destined to be slain by evil eyed Damian is bewildering. The 666 inscribed on the head of Damien is a daft cliché and not from the top drawer of the human imagination. The grief of Peck, though, is caught well in a horizontal wide screen close up of his face. Four years after The Omen Stanley Kubrick joined the horror gravy train. The Shining is far from faultless but it had ambition and the good taste of Kubrick.  After the sustained insult of The Omen the appearance of The Shining constituted relief.