People have made a fuss and rushed to the store counter. Personal Shopper has had acclaim and awards. Not everything that has been said about the movie makes sense but the praise is deserved. Personal Shopper may be flawed but it is stylish, interesting and, although it honours cinematic traditions, is so damned original it can be forgiven its weaker elements. There are moments of subtle suspense, which have inspired comparisons with Hitchcock. These include a tense scene that leads to a discovery of a murder victim, a modest encounter with a ghost, a wander around a spooky house and a couple of poltergeist moments that involve a glass falling to the floor. The best of these moments is the first sight of the moving glass. It mixes two narrative threads and is both disturbing and brilliant. The fading distant figure tantalises and invites curiosity. The murder in the middle of the movie also combines narrative threads and is also great but, despite what the critics say, the conclusion of this important scene is not a success.

Any scene that has suspense rather than shock will be compared to the ubiquitous plump Master but the dramatic scenes in Personal Shopper evoke more the great forties Hollywood ghost movie The Uninvited. Cinematic links with the past dominate Personal Shopper but, because the action is restrained, the film belongs to the post horror genre. Instead of gore or jump scares Personal Shopper, like The Uninvited, relies on mysterious sound effects and takes advantage of the subtle facial expressions of the actor Kirsten Stewart who, as Maureen Cartwright, carries not just shopping bags but Personal Shopper. She has the ability to look both ordinary and attractive. All it takes is a smile or a shake of the hair, and we have an alternative identity to consider. The supporting cast is also excellent. The German actor Lars Eidinger will be familiar to Brits who watched the not great British TV series SS-GB.  In Personal Shopper Eidinger plays Ingo a bruised and complex character whose remarks anticipate subsequent conversation.   We soon understand that soft-spoken Ingo is a hidden emotional jungle. Stewart and Eidinger have sensitivity, mystery and competence. This is important because the dialogue in the film is uneven. The actors, though, are able to puncture the weaker moments. The weakness in the dialogue is revealed when Stewart meets figures of authority.  Hitchcock was at his least effective when he used policemen and doctors to explain the plot. These are the most wooden scenes in his films. The same applies to Personal Shopper. Stewart also meets the new boyfriend of the woman who was previously the girlfriend of her dead brother. The scene is essential and it does lead to the fabulous encounter with the moving glass but there are some creaky lines best forgotten.

Maureen Cartwright earns a living as a personal shopper for a rich trendy but is also a medium interested in the spiritual world. She expects that her dead brother will make contact with her. He or someone does, and this is confirmed by the brief appearance of a hazy spiritual figure. What is less clear is the extent to which Maureen is communicating with the dead brother. The final scene invokes the conclusion of Blow Up by Antonioni. The audience will have to make up its own mind about what may or may not be happening.

Antonioni revealed fifty years ago that the sophisticated tastes of the fashionable embraced fetishism because they needed an indulgence that confirmed their belief in their own transcendence. In Personal Shopper Maureen spends a lot of time looking at clothes. She puts on a pair of shoes to transform her appearance and herself. At one point Maureen claims that a particular dress makes her feel like someone else. Maureen becomes curious about rich Kyra her employer and is tempted to wear her clothes and sleep in her expensive flat. Maureen has a mundane job but lives in different worlds. She wanders amongst people who speak more than one language and travels between cities in search of clothes for Kyra. This movement across worlds corresponds to her ability to cross the spiritual barrier.   The existence of her brother whose physical flaws will shape her future and an employer that obliges Maureen to make personal choices provide evidence that Maureen lacks an independent identity.

The smartphone plays a crucial part in the plot of Personal Shopper. It is obvious that technology makes our modern conversations tangential rather than significant. The smartphone exists not to facilitate intimacy but to provide punctual reminders, efficient demands and empty-headed diversions. Thanks to modern technology it is possible for someone to be in a world beyond his or her normal world. Today, because of the numerous nagging interactions, it feels as if people haunt each other rather than communicate. A key scene in the film involves text conversations with an unknown caller. The text messages are tentative but insistent and, as in the encounters with the spirits, we are forced to consider not only who is haunting who but our own relationships. Work and society obliges others to invade our lives but also us to invade the existence of others. Much of this invasion is unseen, which means it makes it even more difficult to distinguish the invader from the invaded and even know whether an invasion has taken place. The text conversation between Maureen and her unknown caller is great and addictive viewing and it supports the themes in the movie.  But you have to be a dope not to figure out who is sending texts to Maureen. 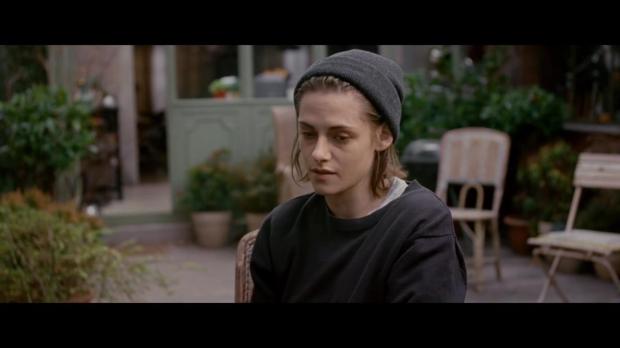 The people in Personal Shopper spend a lot of time waiting.   Maureen waits for clothes, Maureen waits for the next text and a response from the dead brother, the people buying the house of the dead brother wait for Maureen to confirm whether the spirit of her brother is still around, and bruised Ingo waits for Kyra so that he can discuss the end of their relationship. Poor Ingo even waits for replies to his remarks. Waiting is when we haunt in silence and allow others to do the same to us. Modern technology means there are more messages to expect and that obliges us to spend more time waiting. Because the waiting often happens when we feel alone, we do not know who is waiting and for whom.  Expectation and waiting create hope and it is hope rather than our experiences that defines us. Hope is our permanent baggage. The unknowable future is what makes us all lonely and it is why we settle for routines that mitigate loneliness.   In the Spanish language one word is used for to wait and to hope. Somebody has already thought this through. 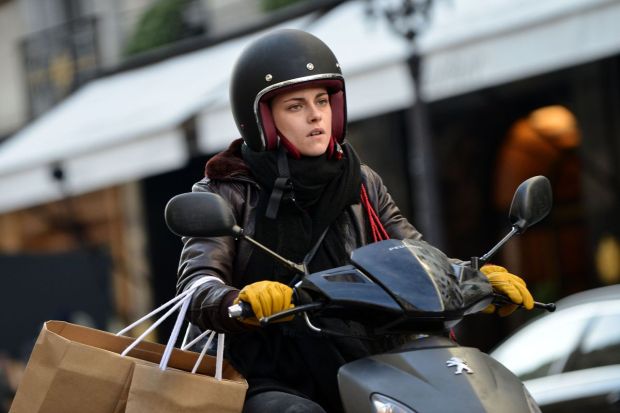 If Antonioni is evoked by the fashion world and the power of fetishism and image in a disconnected society, Personal Shopper also pays homage to the great French director Jean Luc Goddard. Both directors had existential dissatisfaction with modern capitalism. Personal Shopper has a feel of 60s French avant-garde cinema.   Maureen rides around the same oblivious Paris that Jean Seberg and Jean Paul Belmondo cruised. Dependent on rich patrons she enjoys brief moments of carefree independence and authenticity. Maureen, though, wants more. She wants to know her destiny and that includes understanding what will be the consequence of her heart condition and what happens after death. Her dead brother, who also had the same condition, is the only hope Maureen has of an answer. Why Maureen has faith in something that can drop a glass and produce a few knocks on the wall is, of course, the biggest mystery in the film. But mystery on that scale is not confined to Personal Shopper. More than a few trust in a God that so far has not even managed a knock on the wall.   Maureen asks herself if what is happening is inside her mind.  Despite our reliance on others our identity and existence will be determined by our needs and imagination. The rest are intrusions that we not always observe and, when we do recognise and permit them, we can misinterpret. Yet we need them because there is little else for us to utilise. All the intrusions, those that actually exist and the others we imagine, are not only evidence of our industry and creativity but also our shabby limitations.