Karl Marx and Herbert Marcuse have to take some responsibility. Before they mentioned industrial alienation and the one-dimensional man of consumer capitalism human beings only had to worry about classical pessimism. Now you cannot trip over a discarded zombie without thinking about the absence of free will in the modern world. As this is being typed, the inhabitants of the UK are searching for Black Friday deals from retailers. This hysteria has already been celebrated on social media as if it is the next stage in human fulfilment. Zombie moviemakers think differently. The notion of what separates one-dimensional humans in a materialist society from empty-headed zombies has been explored for half a century. In The Rezort the idea is made explicit. Two women sit on the bonnet of a Range Rover and ask whatever happened to free will. They are confused as to what is supposed to be the difference between hungry zombies and glutinous humans obsessed with spending money.

The Rezort is a low budget British horror movie. It has a mix of actors and accents from various countries and continents. A harsh landscape filmed in dark blue filter helps  Australian actress Jessica De Gouw to feel at home. The Rezort is available on DVD and can be streamed from Netflix but the only cinemas that have shown the film are in Spain and the Philippines. Not everyone has been sympathetic to the film. It has been condemned for lacking originality but if using Jurassic Park as a model for a zombie horror film feels obvious, it is a neat notion. The 4.33 concerto by John Cage that was premiered in 1952 has no notes. He believed that silence did not exist, and to prove him right all you had to do was listen to it.  Cage was both praised and condemned for producing something that required no effort from him other than walking to a redundant piano.  We all could have done what John Cage did but he thought of it first.    An out of control tourist resort provides a good setting for a zombie picture.  What succeeded in Westworld and Jurassic Park works for The Rezort.  Perhaps its jaundiced view about modern humanity is nothing new but we should be wary of knocking critical continuity and consistency.

The Rezort is a movie aimed at horror fans.  It has zombies, exploding heads, gruesome deaths and for once the zombies are not just interested in eating brains.  In The Rezort the desire for vengeance unites both zombies and humans. The Rezort may not be the equal of Last Train To Busan, The Girl With All The Gifts or Maggie but those films lifted and extended the zombie genre. They are all exceptional efforts. The Rezort has a couple of implausible moments and the social satire is heavy handed but it is more watchable than either the pointless World War Z or the overwrought The Walking Dead.  The Rezort demonstrates that modest B movie ambition and serious purpose are not incompatible. The connection the film makes between the fear and persecution of zombies and our treatment of refugees is valid.  Jurassic Park asked us to worry about extinct dinosaurs and possibly the planet but was softened by Spielberg caramel. The Rezort avoids the sugar. It examines what we are and our willingness to dismiss the existence of others. In Spain the film was called Generación Z.  For the self-centred holidaymakers the zombies are a source of amusement. Apart from the businessmen who see them as a resource that will generate a profit the refugees camped outside the zombie park are ignored. When someone in the media half-heartedly suggests possible exploitation, an executive spouts the normal clichés about creating jobs.

Much of the film is familiar but that is the point. Nothing has changed since the original movie warnings were made about the lives we live and the resources we consume. At least familiar scenes have the virtue of provoking cineaste memories. In The Rezort the cast spends time walking between possible zombie hideouts and looking around anxiously.  At times it has the feel of a Budd Boetticher Western. Dougray Scott leads the group through the hazards and makes a few nods to his namesake Randolph. He plays a man of strength and few words but we also have a hint of his demons through one simple line of dialogue. The presence of Dougray Scott as Archer in The Rezort should interest more than a few movie fans. He was the alternative choice to Daniel Craig for James Bond.  Scott has the Celtic roots of Brosnan but the nihilistic insouciance of Craig. We root for this lonely leader. Jessica De Gouw plays the weakened but still strong Melanie. She attends the resort because her psychiatrist has the idea that those traumatised by the previous apocalypse can seek solace by taking pot shots at tamed zombies. This is another neat concept in a film that has more than a few sly intelligent moments. 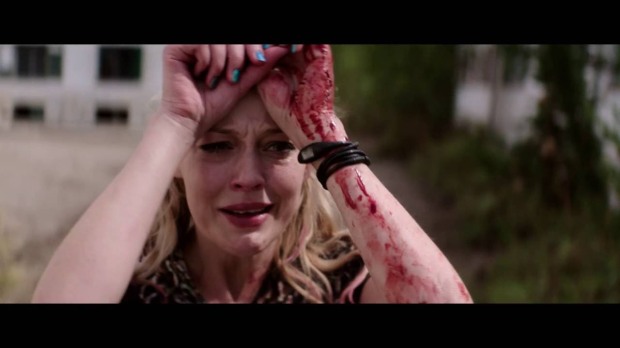 The characterisation in the movie may be thin but there is sharp delineation between the main protaganists.  The perhaps crude distinctions do not prevent the existence of ‘doubles’ within the film. All the main characters are the other side of the same coin to someone else.  The two computer technicians who fail to spot the security lapse are insular and have no understanding of their culpability.  The zombie that is used for display purposes and to welcome the tourists resembles the evil female boss of the zombie park.  Melanie and Sadie the left wing activist have some sympathy for the zombies and share a similar conscience. Their empathy and decency are underlined after it is revealed that Sadie has unwittingly created the tragedy in the resort.  Again it is achieved by just one short line of dialogue.  Archer and Lewis, the boyfriend of Melanie, are ex-Army men scarred by the experience of conflict. The two teenage dudes are empty headed and adrenaline fed.  These adolescents are a weakness in the film.  Their parts are overwritten and overplayed. Watch this excitable pair and you have a sense of how Ant and Dec must have been the day Dec was admitted to rehab.  More impressive is how the plot dovetails between the fates of two sets of twin characters. The end of the film emphasises the importance of doubles and alternatives in our lives.

Low light photography is pushed to the limit in The Rezort.  A major set piece takes place in nothing but a dark room yet it succeeds in adding to the suspense and action.  No doubt it put a smile on the face of the person who managed the budget for the film. When not being entertained, the tourists inhabit dark interiors.  These contrast with the outdoors and bright colours of the resort. The darkness symbolises empty personal confusion and the dependency on distraction. Life is even tougher for the refugees in their camp outside the resort. The vision of the powerful for the future of the refugees is heartless, as of course it is in the real world.

The figures for the actual refugee problem are as disturbing and as overwhelming as the zombie mass that we see run through the landscape in The Rezort . In 2017 there are 152m people in need of humanitarian assistance. 64m have been forced to flee their homes, and 94m lack access to clean water. Fixing the problem will cost a lot more than making a low budget zombie movie. The estimate is $23.1bn.  Some countries are helping.  Global authorities classify countries and their economies as either strong or fragile. The 36 most fragile countries account for just 2.65% of the global gross domestic product but are the hosts to 71% of the population of the world that has been internally displaced. South Sudan wins the prize for being the most fragile country in the world but hosts 219 displaced people per 1000 inhabitants. The UK, Canada and Australia host 3 displaced people per 1000 inhabitants. The European Union has 24% of global gross domestic product but hosts just 1% of the forcibly displaced people that exist on the planet. The USA has 23% and also hosts 1% of refugees. There are excuses for the poor performance of the UK. The British economy has tanked, the Daily Mail spouts prejudice and the British Government no longer has the competence to provide jobs and income for its own citizens.

The Rezort is a low budget zombie movie. The technical expertise hides those budgetary limitations, and accomplished editing ensures that the film moves along without any hitches. The celebratory scenes in the resort lack the scale of The Hunger Games but they are realistic. More important than any of that is the accusatory heart that pumps the pulse of the film.   Daily Mail readers could do a lot worse at the end of the night than sit down and sample The Rezort. They should fold their newspaper, pour a whisky perhaps, switch on the streaming account with Amazon or Netflix and then watch the movie. After being entertained they can think again about what they should do on their holidays. They may also want to consider why so many of their generation voted for Brexit and a Government that believes additional tax breaks are essential for the rich but the absence of clean water, education, a home and medical care for millions of people can be ignored.