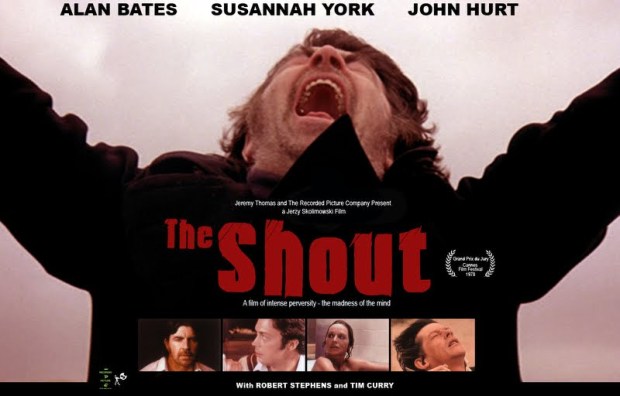 Much of what happens in The Shout is mysterious. There are odd snippets of disconnected dialogue and unexplained incidents. We are expected to surmise and wonder. The idea behind the film, though, is simple. A cricket match takes place in a lunatic asylum. Inside the scoreboard one of the inmates tells a story that may or may not be accurate. The storyteller admits that he changes the story every time he tells it to someone.  His tale concerns a man who has been taught by aborigines to create a shout that kills people. The man with the special tonsils invites himself into the home of an avant-garde musician. He persuades the wife of the musician to commit adultery. The husband resists and resorts to similar aboriginal sorcery.

If unreliable narrators and magical powers are not complicated enough, Polish director Jerzy Skolimowsky adds surreal invention. The Shout appeared in cinemas before the end of the 70s decade but it feels like a British film from the 60s.  Nothing in The Shout is as bizarre as the theatrics of cricket, and the surreal invention merges into a satire of British eccentricity.  The original story was written by Robert Graves.  His work ranged from the commercial but mechanical I, Claudius to the almost unreadable The White Goddess. Graves was gifted, clever, superior and original but he was also a historian whose head was full of not just the important myths of our culture but a fair amount of mumbo jumbo.  His claims often made interesting reading but the serious scholars tore his work apart.  Robert Graves would have welcomed the 60s.  The Shout was written in 1928. 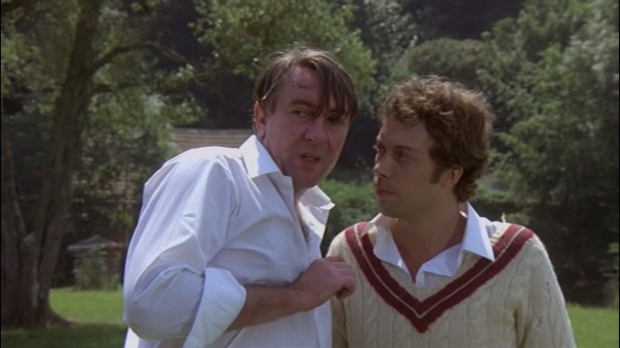 Both the 60s and the 20s were distinguished by know-all hedonism. This connection means that the original story and its purpose remain intact in the film. The Shout is a weird mix of domestic drama and strange musings about pagan sorcery and power. The additional invention by director Jerzy Skolimowsky can be a distraction. It weakens rather than strengthens the metaphor and drama.   There are viewers that find The Shout baffling but there is a simple explanation for what happens in the film. That explanation and the mystical mystery are not incompatible but they are obscured because of the additional invention and sly humour. 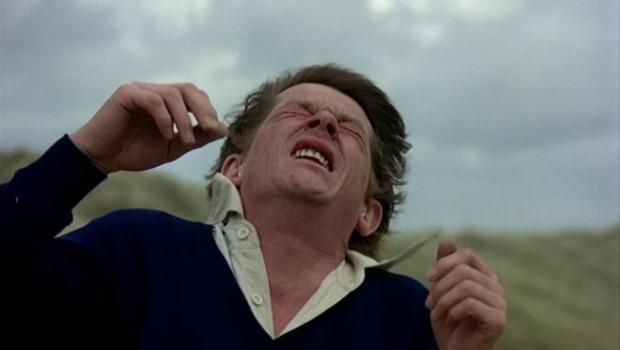 In the tale within the tale the shout from the man who has been taught aboriginal powers kills people.  Sound is important to the film.  The musical score was created by Michael Rutherford and Tony Banks. These two gentlemen were in the pop group Genesis. There is nothing in the music that is either memorable or offensive. The rest of the soundtrack, though, is impressive.  Movie sound has declined in recent years. Booms, explosions and surround sound have defeated clarity. In 1978 the technicians understood the importance of the counterpoint of silence and individual highlights. We watch Anthony Fielding, the husband whose home is invaded, work in his studio and experiment with different sounds. He uses the microphone to add scale and mystery to mundane noise. All the scenes in the film, though, are distinguished by not just what we see but what we hear, falling rain hissing down, cricket bats hitting a ball, a motorbike engine roaring, isolated footsteps echoing inside a corridor, kettles boiling and murmuring, windows cracking and much more. All are important.   The Shout anticipates the recent horror classic The Berberian Sound Studio in which the sound technician on a cheap Italian movie loses his identity.   Fear and unease transform sounds into haunting echoes. 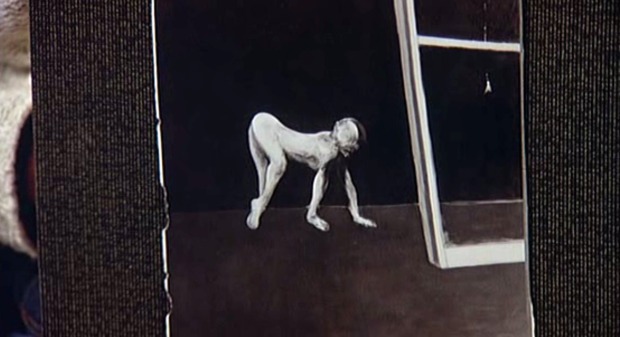 Jerzy Skolimowsky contributed to the script of Knife In The Water the famous movie by Roman Polanski.   When the characters in The Shout are not discussing the transcendental, the dialogue is professional, authentic and accomplished. The stuff about the human soul is not that meaningful for modern audiences.  The digital age has reduced metaphysics to abstract numbers, and these days fewer people imagine death releasing beautiful butterflies to float around heaven.  For a while Skolimowsky looked as if he might be the missing misanthropic link between the brooding films of Joseph Losey and Harold Pinter and the edgy genius of Polanski.  Deep End and Moonlighting are impressive films and promised an oeuvre from Jerzy Skolimowsky that would contribute to a distinguished genre within British cinema. It did not happen. The more Skolimowsky learnt about the British the more they confused him. His attempts at pure British comedy were a disaster. The good news is that he recovered his form when he returned to Poland.

As in Knife In The Water, two men in The Shout become competitive and try to impress the woman caught between them. Susannah York is the woman who tempts Alan Bates, the intruder, and John Hurt, the husband.  Bates manages to be both threatening and sympathetic. Hurt is weak but vital, and York is mysterious and deceitful but not malevolent. The wife has needs that go beyond her marriage.   She may have been fed nonsense by her seducer but he has enabled her to think again about the rest of her life, and this is apparent at the end of the film. The final scene is very effective. It not only adds a common sense perspective but also serves as a rebuke to overheated imaginations. 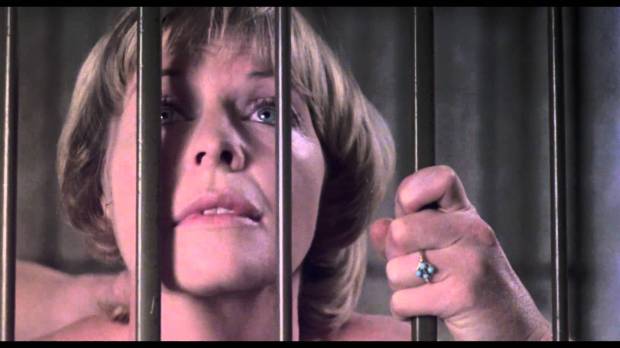 Meanwhile there is the shout that may or may not kill people. No one can deny it functions within the story and connects the world of myth and sorcery to the faith or hope that inspire creativity.  The shout also resonates as a symbol of masculine power. Bates is in an insane asylum when he tells his story. He imagines himself as the omnipotent male who can seduce women and reduce other men to impotency.  The shout also represents what may be possible if we resist the constraints of civilisation, the animal strength and mystical power available to the uninhibited rather than just the powerful. But if the shout defines a freedom that can offer fulfilment for the individual, it can destroy others. The shout has to be resisted, and that means invoking other mystical rituals.

Horror fans or at least those fans that like The Shout have claimed the film for their favourite genre.  For that to be valid we have to give an awful lot of credence to the tale told by Alan Bates and neglect his presence inside an insane asylum. The old, cautious and staid will settle for a simple and mundane explanation of the plot. This may reduce the mysticism to inventions of the human imagination but it expands the mystery of human nature. The Shout has been defined by horror expert Kim Newman as a combination of Somerset Maugham and M R James. Newman has a point, and it is an elegant observation. When he was older, John Hurt played the haunted man in a BBC adaptation of the M R James story, Whistle And I’ll Come To You.   It would do no harm to watch The Shout after reading some M R James. 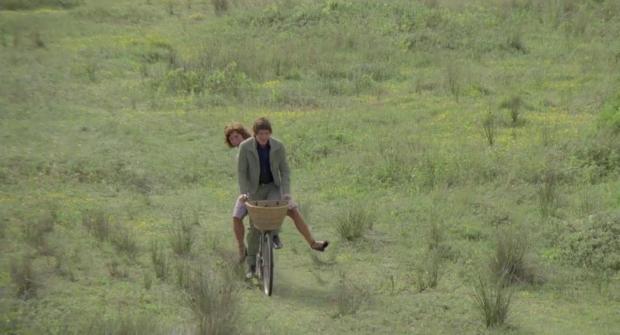 Made in 1978 The Shout was preoccupied with an England that was avoiding the modern world. The village life is gentle but a little dull. The impressive coastal landscape and footpath still exist but despite the efforts to preserve the past the lives of rural Englanders have changed.  Now many of them juggle jobs in order to pay the bills. In the winter the picturesque villages they live in are emptied because the tourists and their money disappear. Disturbed by the people from the city the natives cling to tradition and pledge their faith to a political party that feels entitled to both use the title Conservatives and commit to the endless radical change of modern capitalism.  The more Britain changes the more the countryside has to be preserved for the tourists and their financial support. The Shout was filmed in six weeks of uninterrupted sunshine and good weather. The film may be concerned with complicated human impulses but the sunshine ensured that the dark prospects for rural life could be ignored. 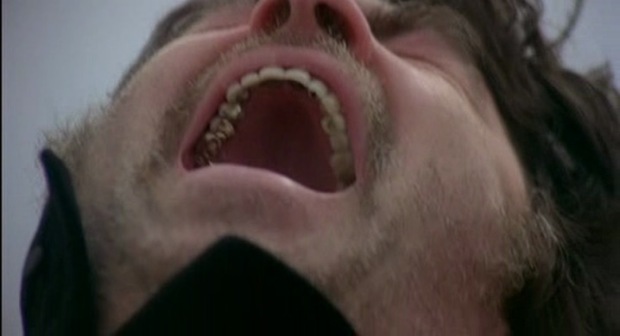 Since the referendum decision to leave the European Union there has been a debate about who will pay the substantial EU subsidy to farmers. The Conservative Party has promised that the British Government will make good the Brexit shortfall. Promises have been made before. The Cameron government pledged to reform the NHS and improve the service to patients. The deterioration within the NHS has been shocking and rapid. This winter patients have died in corridors, and cancer treatments have been postponed. Rural dwellers have ensured that in Britain right wing governments have outnumbered those of the left.   In The Shout the eccentricity of the British upper class was mocked. Today the privileged are groomed in ruthless and efficient public schools. No one thinks that they are eccentric any more.  Instead, we have neoliberal ideologues that talk about the invisible hand.  Such people have no regard for subsidies and will be reluctant to support the farmers to operate outside market economics. People change, and so does life in the villages.

Howard Jackson has had seven books published by Red Rattle Books including novels, short stories, a travel book and collections of film criticism.   If you are interested in original horror and crime fiction and want information about the books of Howard Jackson and the other great titles at Red Rattle Books, click here.