John Garfield was a tough guy with a weak heart. Both qualities were a consequence of his childhood. A heavy dose of scarlet fever left Garfield with the damaged heart. His impoverished childhood meant he ran wild on the streets of New York. He even sampled the life of a hobo. The opening sentence of the novella The Postman Always Rings Twice by James M Cain is one of the best ever; ‘They threw me off the hay truck about noon.’ After that the beginning of the movie was destined to be an anti-climax, and it would have been except that it was authentic tough guy John Garfield falling off the back of the truck.   The novella by Cain was sexy and a little twisted. The movie was censored by the Motion Picture Production Code but the bureaucrats could do nothing about the lusty expectation in the eyes of Garfield and the open mouth simper of Lana Turner. The movie was a big hit. Audiences liked Turner and Garfield.   If Turner was sexy and beautiful, the appeal of Garfield was more complicated.

John Garfield was an actor rated by both the critics and his peers. He had a naturalistic style that anticipated Brando and an intensity that could be compared to Cagney. Garfield can be described as the link between the two actors and the different acting traditions. Garfield, like Cagney, was a physical actor.  In his performances he holds a cigarette and a telephone as if they are weapons. When he turns the pages of a newspaper, he concentrates in a way that insists we think about the information he is absorbing. There are many fabulous moments in his career and more than a few in his greatest movie, the best ever film noir Force Of Evil. At one point in Force Of Evil, Garfield walks through a corridor. He is a lawyer, and running is not permissible. To let us know that he is determined, Garfield tilts his shoulder so that it is at an angle to the floor and he walks in a line that is not quite straight.   The gesture is an exaggerated way of communicating determination but it is also audacious and it succeeds.

Actors who shared a similar background to Garfield could provide physical authenticity but struggled with subtle dialogue.   John Garfield also had a good ear. Nothing in his career was as challenging as the dialogue in Force Of Evil.  In subsequent interviews the director Abraham Polonsky claimed that the dialogue in the film was not the blank verse the critics assumed.  According to Polonsky, he did nothing more than sprinkle some repetition and add poetical rhythm.   Whatever we are listening to, Garfield is adept.  He provides a lyrical lilt and adds tension to the pauses. 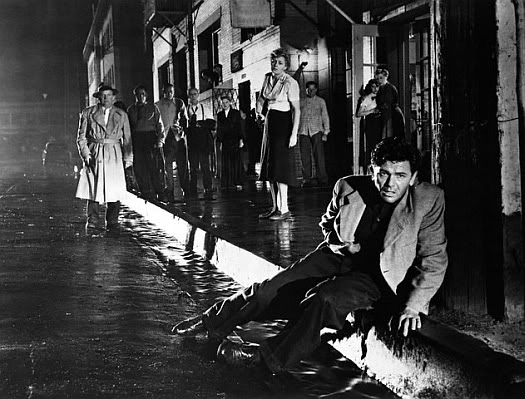 His heart, and perhaps his background, caused the death of the actor in 1952.  John Garfield was 39 years old.  In the previous year he made his last film He Ran All The Way.  Weariness, which may have had something to do with what was happening in his life, informed a convincing performance. Garfield played Nick Robey an amoral criminal who is without pity for his victims. But, because of the acting by Garfield, we understand that the criminal is a wounded animal. Nick Robey, like many others, never had a chance.   Critics and fellow actors understood the skill of Garfield. The rest of us approved of him because he appeared to be like the people we knew, an ordinary man, cocky but shy, arrogant but insecure, loud but wary, innocent but tricky and cunning. In the 40s there was no one like Garfield and that still applied when his movies appeared on British TV many years later.

Not all the movies that John Garfield made were great but that has something to do with him having to do what he was told by Hollywood.   Before the end of his career he co-founded the independent production company The Enterprise Studio. The nine films made by the studio are a mixed bunch.   They include Westerns, comedies and romantic dramas.  None are awful but three are important.  Caught is a fine film noir from the great director Max Ophuls, and Body And Soul and Force Of Evil are the two classics.  These two were made because of the independence and single-mindedness of The Enterprise Studio. The later blacklisted Abraham Polonsky wrote the scripts for both films and he directed Force Of Evil.

For all of his life Polonsky believed that capitalism was a flawed economic and social system. The movies, though, are not tainted by pedestrian dialectic. Polonsky liked to suggest rather than preach.   Right wing cynics assumed that he nailed the flaws in human nature. Left wing rebels secretly waved the flag under their cinema seat.  In both of the Polonsky films Garfield plays a man who has ambition, someone who wants money and what and whom it buys. He is always, though, more than mere gluttony and appetites. Fear feeds his ambition.  The moments of conscience are sparse but believable.

In a better world it would have been different. Garfield would have lived until he was old, Polonsky would not have been blacklisted, and more great films from the two men would have followed. Instead of being restricted to being a movie icon of the 40s, Garfield would have accepted the offer of the part of Stanley Kowalski in A Streetcar Named Desire. Because of his involvement with The Enterprise Studio, Garfield said no, and Brando took the role.  Marlon was so good people looked to the future rather than remember the past. The memory and contribution of John Garfield was obscured by the hard-hitting realism of Brando and the daring of Tennessee Williams.  It could have been different. Brando would have arrived whatever Garfield had done. If Garfield had claimed the part of Kowalski, the two men might have shaped and shared the decade and what followed. 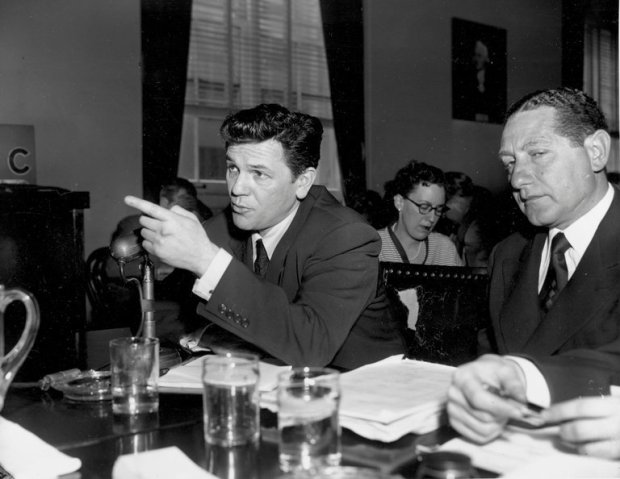 It did not happen. Garfield stayed in Hollywood and made two classic movies but was persecuted by the House Committee on Un-American Activities. His wife had been a member of the Communist Party.   The accepted opinion is that Garfield was a left leaning liberal.  In his testimony to the House Committee he condemned Communism.  He proclaimed himself to be a patriot and a Democrat.  During the Second World War he made a few patriotic flag wavers, again they included a couple of classics, Air Force and Destination Tokyo.  In Hollywood there were creative talents who were committed to Marxist ideology.  The House Committee wanted names of what they regarded as fellow conspirators. There was no conspiracy just a few people exchanging ideas and theory but the lack of a sinister plot was no deterrent to the members of the Committee.   Left wing writers and directors were put under pressure to reveal names, and the majority buckled. John Garfield had less reason than others to resist. He was asked to identify people who had political opinions with which he disagreed. Resist, though, he did. John Garfield had his tough guy ethics, the code of the street and his social class. He refused to give names. When he had to do something other than pretend to be a hero, John Garfield delivered.   His two children both became actors.  His inspiration reached beyond the movie screen and into an admiring family. 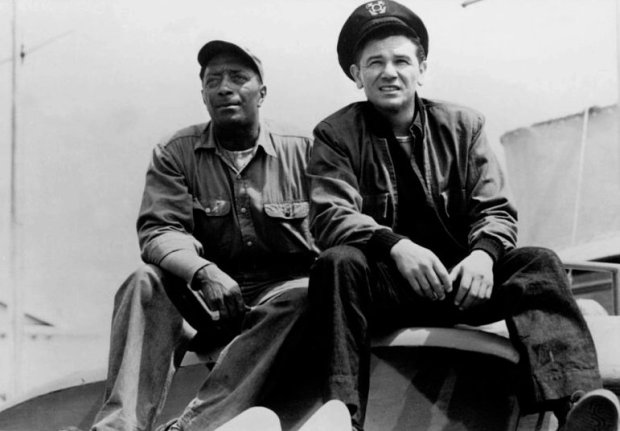 The authenticity of John Garfield was a key factor in his success as a movie actor yet the truth is he had more than that.   He was handsome from certain angles but ordinary in others. He convinced both as a lover and warrior. His politics were inspired by decency rather than theory. The performances of Garfield remind an audience that he has not forgotten what it is like to suffer and be powerless. He is always a dominant personality but in many of his films he qualifies as the victim. If his characters become rich, they have to battle and take knocks. He was persuasive as a boxer but also as a gangster with an aching heart. And he also held his own against magnetic female stars such as Lana Turner, Bette Davis and Joan Crawford. 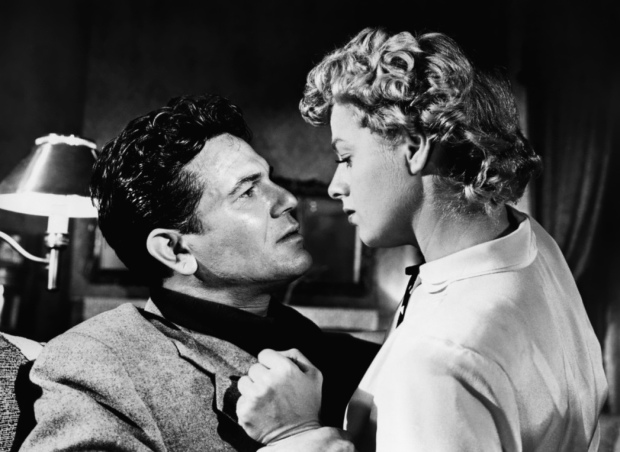 Apart from the Polonsky duo there are two other films where Garfield and his sense of what capricious life means for ordinary people puts him in a special class. These are The Sea Wolf and They Made Me A Criminal. The latter is a piece of tosh.  The happy ending is unbelievable yet a relief because that is what anyone watching wants for Garfield.  The Sea Wolf is based on the fine novel by Jack London. The adaptation shelves the second half of the book, which is okay because people had to get home after watching the film. A sequel would have been welcome because we could have watched Garfield and Ida Lupino battle the privations of life on a remote island.  But maybe the solitary hero was not in the nature of John Garfield.  He may have been a lonely man when he appeared in front of the House Committee on Un-American activities but his heroism was always defined by his sympathy for the victims of the powerful.  In The Sea Wolf he is the rebellious George Leach who struggles against the cruel captain Wolf Larsen.  Garfield does what he does best.  He resists and protests. It is how he will be remembered.

Howard Jackson has had seven books published by Red Rattle Books including novels, short stories, a travel book and collections of film criticism.   If you are interested in original horror and crime fiction and want information about the books of Howard Jackson and the other great titles at Red Rattle Books, click here.