The movie has all the ingredients, a monster, serial killer, spooky house, precocious child, Hollywood blonde, baffled servants, indignant locals, an almost mad scientist, and an assistant whose barber wants him to look like a werewolf. The artificial limb, though, steals the picture.  The prosthetic belongs to Inspector Krogh.   The problem with the artificial limb is that it sometimes rises of its own accord.   The artificial right hand that has to be pressed down by the left is covered by a black leather glove. The more alert will have guessed. Peter Sellers copied the idea for his performance in Dr Strangelove. In that film the artificial limb moved higher and faster than the one owned by Inspector Krogh. Sellers used the trick to identify his character as a closet Nazi. Peter Sellers was no slouch, especially when he is given an artificial limb to move up and down. Nothing in Dr Strangelove, though, equals the moment in Son Of Frankenstein when Inspector Krogh, for once, permits his right arm to rise automatically to its natural height.  With his right arm and hand in a fixed position Krogh uses his left hand to insert his monocle between the fingers on the artificial hand. While the monocle is gripped by the stiff mechanical fingers inside the black glove Krogh takes out a handkerchief with the left hand and cleans the monocle. Not everything in Son Of Frankenstein is successful but its best moments are inspired, and there are more than a few of these.  When the Creature attacks Krogh and pulls the prosthetic arm away from the body, it is icing on what is already a substantial cake.

Son Of Frankenstein was the third in the Universal trilogy. Basil Rathbone replaced Colin Clive as the obsessive scientist. Someone had to because Colin Clive, the actor who had played Frankenstein, had died two years earlier. Clive was thirty-seven years old. He had suffered from ravenous alcoholism and, unlike director James Whale, was not unabashed about his sexuality. After directing the first two Frankenstein movies from Universal, Whale wanted to move on to something other than horror. Rowland V Lee replaced Whale. Lee was a stalwart from the silent era, which meant he had a good visual eye but was less good with how words came out of the mouths of actors.   His discomfort with movies that talked explains some of the unevenness that is a feature of Son Of Frankenstein.   Basil Rathbone had the figure and capability of an athlete. The sword of Errol Flynn is victorious against Rathbone in the fencing tour de force that concludes The Adventures Of Robin Hood but only because Rathbone pretended to be the inferior swordsman. This was one sporting encounter against an Australian that the Englishman should have won. Rather than utilise the athleticism of Rathbone, the director Rowland V Lee preferred to keep the actors static during conversations. When delivered by actors obliged to be physically wooden, the not always smart exposition becomes stodgy. There are odd points where Rathbone is clearly frustrated by having to stay fixed to a spot that suits the cameraman. When Frankenstein loses his temper, Rathbone dashes across the room like someone who tastes freedom.

Lionel Atwill is okay as Inspector Krogh but give him a sentence and he cannot resist a pregnant pause. Well before the end of the film the pauses and hesitations become predictable. But his relish of the pause is why he is so effective in the moment with the monocle. Atwill was involved in a Hollywood sex scandal.   There was an investigation into a sex orgy at his home. Lionel Atwill married four times, and there were diversions. Perhaps that explains the weakness in his acting style.  Lionel was always obliged to seduce. Rathbone is different. He likes to look down his long nose and sneer. This is why he was so successful as Sherlock Holmes. The other actors are not memorable but they were well paid, and some of them would have had fun, either in the movie or in the home of Lionel Atwill. If the locals in the court scene do not convince, Rowland V Lee makes the scenes inside a very small courtroom interesting.   As in the silent classic by Carl Dreyer, The Passion Of Joan Of Arc, the close ups of intense faces ravaged by time add something credible.

Wyllis Cooper wrote the script. Cooper was a no-nonsense professional whose tongue preferred to be in one of his cheeks. Son Of Frankenstein makes references to the earlier films, and there is even indignation by Frankenstein that the name of his father is given to the scandalous Creature. When Frankenstein suggests that Krogh can help the villagers and give them a hand, the remark has to be a cynical in-house joke. Cooper created the horror radio series Lights Out. The popular tales were explicit, and the sound effects gruesome.  The title of the series may have inspired the classic vintage rock and roll record by Jerry Byrne. Wyllis Cooper and his prolonged success with Lights Out qualify as prototypes for Rod Serling and what he achieved later in The Twilight Zone. Wyllis Cooper had a feel for the formal manner that distinguishes the best of horror fiction. He did, though, let himself down. Dialogue phrases like ‘You don’t mean to say’ or ‘I’m curious to know’ sound like something produced by a writer listening to the sound of his typewriter. Cooper was prolific and competent but the cynicism and deadlines tempted him to be sloppy.  The plot of Son Of Frankenstein is missing a couple of scenes that could have helped.

Stumbles apart the plot provides a mystery to complement the usual vintage horror.   The script of Son Of Frankenstein may not be perfect but at least the aristocrats in the picture sound like cultured and educated characters rather than Hollywood actors. The libido of Lionel Atwill is underutilised but, like Rathbone, he was English. The presence of British performers is important to the success of Son Of Frankenstein. Outside the movies Basil Rathbone made distinguished recordings of the works of Edgar Allan Poe. Lugosi and Karloff have underwritten roles. Lugosi spends too much time looking out of windows.  Karloff lumbers around and grunts rather than speaks.

If opportunities are lost, credit has to be given to the change in style that is introduced by Rowland V Lee.   He jettisoned the art deco sets and camp manner that Whale had preferred in the previous movies.  Instead we have the dark shadows of German expressionism and the stylised surrealism seen in The Cabinet Of Dr Caligari. The countryside is observed from a train. ‘What a strange looking country?’ says Frankenstein. ‘Not much like America, is it?’ says his wife Elsa. The modern world and materialism have been abandoned for the gothic imagination. The Frankenstein mansion has both an asymmetrical exterior and bends away from the ground like something in a fairy tale. Inside the castle there are dramatic rooms.  When questioned by Krogh, Frankenstein plays darts. Instead of three he uses four, and the dartboard is attached to a beam that slopes at an angle. The detail is consequential, a reminder of the strange world both inside and outside the castle.

Much is duplicated. The two double beds ensure censorship is observed but the beds point in opposite directions. The maid observes, ‘If the house is filled with dread, place the beds head to head.’ The remark is haunting and suggests nightmare will prevent intimacy. The shadow of the wide staircase fills the adjacent wall so it exists in two places. Two balconies overlook the dining table.  The doubling applies also to the characters in the film. There are two servants, and the Creature and Ygor constitute the really strange couple that live in the laboratory.  Frankenstein doubles almost with everyone, his wife, the deceased father, his child, the superior and educated Inspector Krogh, and even the Creature. At one point Frankenstein and the Creature are obliged to stare at each other in the mirror. The inference is that Frankenstein is not a gifted singular genius and neither was his father. Frankenstein is a member of the human race and he has responsibilities beyond scientific curiosity. 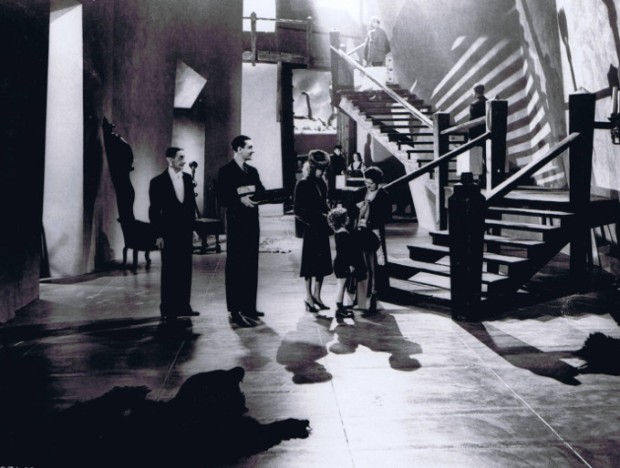 Frankenstein may have meant well but neither the novel nor the movies are sympathetic to his efforts. His weakness is that he overestimates himself and underestimates others. He regards his own enquiries as sanctified but is irritated by the curiosity of the neighbours. His skill with science, which has also been facilitated by privilege, convinces him that his needs should prevail over the wishes of the less gifted and fortunate. Frankenstein is one of those people who have to learn the hard way about elitism. Before the Cambridge Analytica equivalent of Ygor went to the press the Facebook owner Mark Zuckerberg had billions of reasons why he thought he was really clever.  Something has come to life in the digital world and, like the Creature, it is not what Zuckerberg thought he had created. It appears that an impatient ambition capable of creating a fortune worth billions of dollars can also be glib about unforeseen consequences, in this instance the 57 billion friendships that provided raw data for the aspiring Frankensteins and Ygors at Cambridge Analytica.   There are 7.5 billion people living on the planet. Either 57 billion friendships means almost everybody or some people are really popular. Zuckerberg is not a charismatic man. It now appears that he is not even as clever as he thought.