HOUR OF THE GUN

Director John Sturges went to his grave knowing that he had at least made some classic Westerns. The Magnificent Seven and Bad Day At Black Rock are the obvious highlights in a fine career.  Sturges, though, faltered after the success of The Great Escape in 1963. Hour Of The Gun appeared in 1967.   The opening credits of Hour Of The Gun feature the gunfight at the OK Corral.  The rest of the film is about what happened after the famous shootout.  The credit sequence promises a lyricism that the rest of the film fails to deliver.   In this opening scene there is an understated and mysterious moment.   As the Earps walk down the main street of Tombstone, we see and hear a distant figure urge the Earps to reconsider what they are doing.   Many years ago I walked the full length of Tombstone to the OK Corral, the same journey that Wyatt took with his brothers and Doc Holliday.  It is not a short walk. Wyatt Earp had plenty of time to think about what he was doing.

No Western character has inspired Hollywood moviemakers as much as Wyatt Earp. The story of what happened in Tombstone between the Earps and the Clantons has obliged many actors to reach for their holsters.   A few of these films have attempted a biography of Earp.  Others changed the names of the protagonists but shamelessly recycled the history.  Despite all this effort the character of Wyatt Earp remains as elusive as ever. Biographies like Tombstone and Wyatt Earp have their moments including a not to be forgotten performance by Dennis Quaid as Doc Holliday in Wyatt Earp.  All, though, fail to convince.  My Darling Clementine is supreme cinema from master filmmaker John Ford but romantic tosh.

Wyatt Earp was a hard case that was interested in making money and having authority. The best of him stood up to other hard cases but the worst was not averse to taking advantage of the weaker. In Dodge City, and before he arrived at Tombstone, he was the local lawman that ran gambling and prostitution.   In the revisionist movie Doc the conflict between the Earps and the Clantons in Tombstone is presented as an economic contest between two rival families who each wanted to control the town.  The Earps did have economic interests in Tombstone but the Clantons were rowdy and unruly and their behaviour needed a law enforcement response.

Hour Of The Gun is not tosh.  It is interesting, decent and even important but for all that the movie somehow falls flat.   There are various reasons. The proclamation of historical accuracy at the beginning of the film invites an audience to expect authenticity and suspend disbelief.  Sturges fails to deliver and if there is a heaven, he may be there right now wondering why.   There are various reasons.  The casting is not as disastrous as it was in Gunfight At The OK Corral, which Sturges made ten years earlier, but it is not right.   Authenticity benefits from fresh faces and a different style. They do not bring realism but can supersede familiar theatrics.  James Garner tries hard as Wyatt Earp but the supposed moral decline of the lawman as he seeks vengeance for the shootings of his brothers is beyond an actor noted for his charm.   Jason Robards is watchable but he supplies scorn rather than the vicious temperament needed to make Holliday convincing.  The great Robert Ryan plays Clanton but is underused. Hollywood paid good wages, so it should have been able to recruit decent support players. There is not one convincing cameo in Hour Of The Gun. 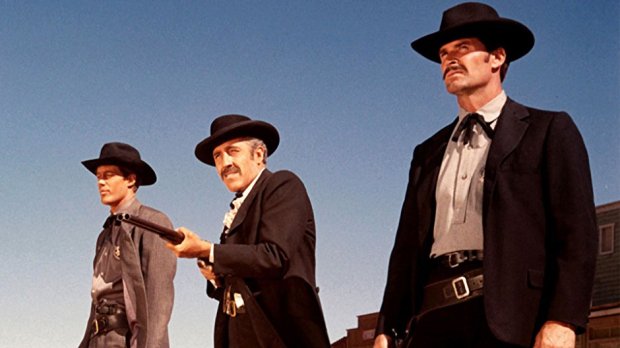 For the film to have impact we have to witness a supposed hero become a self-righteous serial killer. It never quite happens. The film suggests the dark side of Earp but it always gives the Western hero excuses. Nuance and ambiguity have merit but it is a short route from them towards timidity, and Hour Of The Gun takes it although even muted realism about Wyatt Earp is welcome. The gunfights in the film where the outcome is determined by the speed of the draw are fair contests that never existed. Earp killed the people he did because he was strong and sharp enough to gain an advantage.   This truth is hinted at in the gunfight at the train depot but the scene, which should have been a spectacular set piece full of suspense, is not well handled by Sturges. The point gets lost in our disappointment at the cinematic failure.

Edward Anhalt wrote the script for Hour Of The Gun.  Anhalt has an admirable sensibility and conceptual skill. The strength of the movie is how it analyses the changing relationship between Holliday and Earp. Before the film is finished Doc Holliday is warning Earp about seeking vengeance. The irony is satisfying because we are watching a man be counselled and restrained by the devil on his shoulder.   But Anhalt was a talented playwright who was tempted by Hollywood money.  His best work was outside the movies.  Hour Of The Gun would have worked better as a stage play with the emphasis on conversations between two men who have learnt much about themselves.   In Hour Of The Gun no one appears to learn anything of significance.   Holliday asserts that Earp will regret abandoning the law but that is about it.   The decision by Earp at the end of the film to quit being a lawman is not a surprise but the reasons behind the decision are unexplained and unexplored.  Earp spent much of the rest of his life as a gambler roaming the West.   He became an alternative version of Doc Holliday.  The two men were friends because they were alike.

Earp only abandons the law when it proves ineffectual. When he can, he utilises the power of vested interests to give him the legal authority he requires.  Earp is also a public sector employee willing to cut corners.  For a brief period he is supported by Holliday, a man who is used to operating in a market where the winner takes all.   All this is believable but it is undercut by the cinematic presentation of Sturges and the performance of James Garner, which ensure that we cannot forget we are watching a resolute hero.   The truth, though, is that the story of what happened after the OK Corral gunfight is a dull one. Two public employees did what civil servants in Britain do often.   They exceeded their responsibilities and bent the rules to suit themselves.  Hour Of The Gun does not conceal the mundane element in the legend but its exposure weakens the action without ever providing enough intellectual interest.   No one should object to subtlety, and there is no reason why an audience cannot be expected to think about what they are watching. But for that to succeed or be justified the moviemakers need to approach their material with integrity, and it is lacking in Hour Of The Gun.   The subtlety on show feels like timidity.

Before Hour Of The Gun appeared in 1967 there were already precedents for realism in the Western.  Man Of The West appeared in 1960.  Gary Cooper is the hero with the dark past. Director Anthony Mann provides a bleak vision of human nature and somehow combines a King Lear tale with impressive action.   Hour Of The Gun has historical detail and two contradictory characters but, when compared to Man Of The West, it is superficial. Sturges and Anhalt refuse to be honest about a tale of vengeance and murder, material that could have been interpreted as stylised horror. There is nothing wrong with characters that are not obvious heroes or villains but the darkness within Holliday and Earp is underexposed.   Instead, we have the compromises in the life of a public sector employee presented as a Western adventure.   The inevitable happens. Hour Of The Gun is interesting but dull.

Yet the film should be seen. A superficial man too willing to slay others is given the benefit of Hollywood glamour, and the result is an aesthetic confusion that pricks the conscience of the viewer. It may be an unintended consequence but, when we watch Hour Of The Gun, our relationship to violent drama becomes as baffling as the misunderstood men who inspired the tale.  Earp is an action hero but we do not know how to respond to his confident courage.  Something else stays in the mind, and it is the sense of entitlement that some people have.   Although Earp and the Clantons are preoccupied with each other, there is no concern for how their behaviour affects the townspeople.  People without power are invisible in Hour Of The Gun.  Earp feels entitled to his vengeance and influence.  He will not be denied. Holliday has appetites and expects comforts and pleasure beyond his enfeebled body.   Neither man has a conscience about the privilege that enables them to cut corners. They are philosophical about the premature death of others and callous.

Those British Civil Servants who thought it would help their careers to accept impossible targets for reducing immigration into the UK were also willing to cut corners.  Because their careers and privilege were so important, they were prepared to have legal British citizens removed from their homeland.   No chance, though, of any of them becoming legends.  Earp was lucky.  He outlived his enemies and was able to present himself to writers as a hero. As hard as they try, the present British Government will not be able to rewrite their own history.   The stain is already spreading and it will be remembered.