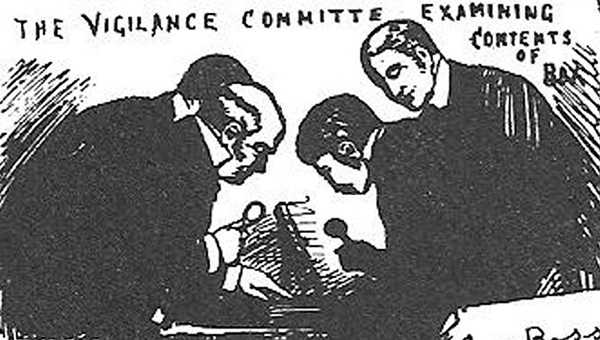 In Hollywood movies the vigilantes carry torches and some rope. Movie directors have the less handsome actors stand outside the town jail and shout at the Sheriff. The British are different. We meet in the local pub and groan a little. Over a pint of beer the committee members vote for a chairman and treasurer and draft a constitution. The Ripper experts are vague about how many vigilance committees existed in Whitechapel in 1888. There were at least six. The most famous was the Whitechapel Vigilance Committee and local businessman George Lusk was the chairman. George was a 49 years old successful builder and decorator, and the Committee had a dozen businessmen. The treasurer was George Aarons. He was the landlord of the Crown Tavern, the pub where the Whitechapel Vigilance Committee met. The businessmen made the decisions but also drafted unemployed workmen to help. These men patrolled the streets. Organised by Lusk the businessmen supplied each volunteer with a whistle, a pair of strong shoes and a heavy stick. The patrols of the Whitechapel Vigilance Committee and other vigilance committees had the approval of the police. Neither were the street patrols restricted to working men. Students also acted as vigilantes. The students operated out of Toynbee Hall, which today is a community centre but back in 1888 it was a charity dedicated to social reform.

Six vigilance committees have been identified by historians and these are supposed to be the ones that employed the men who patrolled the streets. The other committees were St Judes, City V.C., Jewish V.C., Spitalfields, and Workmens V.C.   Mile End VC appeared in 1889 but that was the Whitechapel Vigilance Committee renamed, possibly to suit the chairman that replaced George Lusk. The vigilance committee of St Judes had 70 members and was formed the day after Martha Tabram was killed. Her murder preceeded the ‘the canonical five’ that is associated with Jack the Ripper but there were also four female Whitechapel victims before Martha Tabram. The distinction between the Whitechapel murders and ‘the canonical five’ came later.

The likelihood is that there were more vigilance committees than six but if they existed, they have not been remembered.   Neither can we assume that all the vigilance committees that existed in Whitechapel were a response to the crimes of Jack the Ripper. Some were formed to mitigate the high level of prostitution and disorderly behaviour that existed in Whitechapel.  Some committees faded quickly, others existed before the murders began. 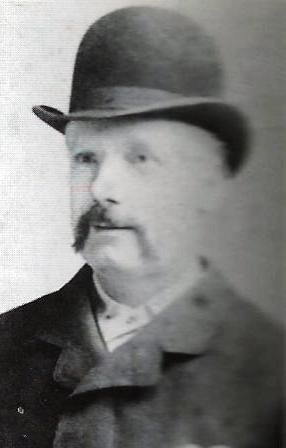 Jack the Ripper left a legacy of fame but most of it landed on unwilling victims, confused medics and weary policemen. The vigilantes were not destined for immortality but George Lusk was different. This 49 years old builder and decorator became famous because he had industry and confidence and identified initiatives before others. His Whitechapel Vigilance Committee organised street patrols and collected £5 from each of the Committee members to pay for a reward. More money was collected to support the volunteers with the heavy sticks. Lusk hired private detectives and plastered billposters across the buildings of Whitechapel. The posters pleaded for people to come forward with information. Lusk also wrote letters. Some of them went to the police. Lusk targeted all levels in the police force including the Commissioner Sir Charles Warren. His other correspondence landed on the desks of powerful politicians. Lusk wrote to the Prime Minister Lord Salisbury, the Home Secretary Henry Matthews and, most audacious of all, he presented a petition to Queen Victoria where he found a critical ear. ‘Our detectives must be improved,’ said the Queen. She did not say how.

Apart from the reward of the Whitechapel Vigilance Committee that he helped fund, Lusk also demanded that the Government and the Metropolitan Police offer a substantial reward to the public for information about the crimes.   Lusk is viewed by historians with sympathy. The view is that he had a genuine concern for the victims and had worries about the future. He sensed that the murders would continue. Decency and a willingness to devote his spare time to the good of his neighbourhood would have been enough for Lusk to be remembered. More, though, happened.   Someone claiming to be Jack the Ripper wrote Lusk a letter and enclosed half a human kidney. The letter was in red ink, and the home address was Hell. The letter imitated what had previously been sent to the Central News Agency. The first letter is regarded as a hoax. Police reckoned it was written by a journalist looking for a story.   The imitation, though, may well have been written by the Ripper. The enclosed half kidney was human, and, when she was killed, Catherine Eddowes had her kidney removed by the assassin. The person who wrote from Hell claimed to have fried and eaten the other half. Lusk thought the letter was another hoax and left the letter and kidney in his desk until the next meeting of the Whitechapel Vigilance Committee. The other committee members persuaded Lusk to take the kidney to the local hospital where it was examined by police surgeon Dr Brown. Police memos state that the kidney could have come from any human body. 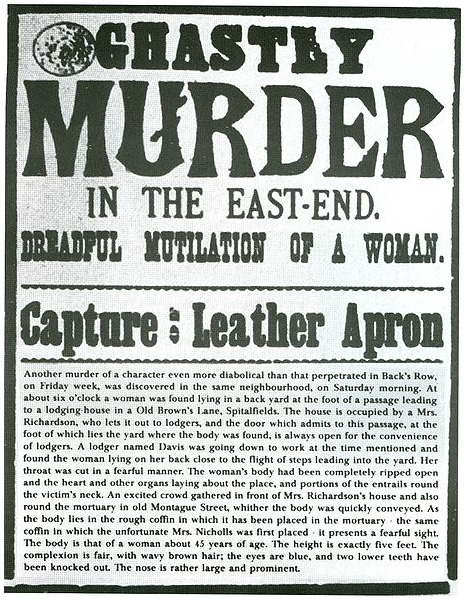 The uninspired 1988 British TV series Jack The Ripper not only had a charmless Michael Caine as Inspector Abberline it portrayed George Akin Lusk as a radical socialist who had a compulsion towards violence. Most of the time he snarled and acted unreasonably.   This has shocked those who feel Lusk should be remembered as a responsible and admirable citizen. The shocked have a point. Fiction is obliged to amend history but this invention was twisted, irresponsible and crude. The shocked should not be surprised. British tirades against left wing thinking and activists neither honour accuracy nor show respect to those whose views were later vindicated.

Vigilance against crime, though, is not restricted to those who regard themselves as vigilantes. We all contribute to vigilance if only because we reply to questions from the police, report on wrongdoing and do what we are told. The Whitechapel community cooperated and was supportive of the action taken by the police. In less than two months after the murder of the final victim Mary Jane Kelly, the police received 1400 letters from the public. Some may have been the product of overactive imaginations but most of the correspondents meant well.   A few writers nominated suspects. If the murders strengthened community spirit and purpose, they also encouraged neighbours to be suspicious of each other and sometimes surrender to vindictiveness. Compassion was mixed with grievance. 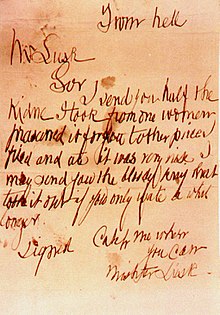 Mary ‘Polly’ Nichols is regarded as the first Ripper victim but she was the sixth in the series of Whitechapel attacks on women. The Morning Advertiser stated that the time and route of her funeral was a ‘profound secret’ but when the hearse was observed in Hanbury Street the crowds ‘numbered some thousands’. Twenty-five years old Mary Jane Kelly the supposed final victim of the Ripper was murdered on the 9th of November 1888 and buried ten days later. Several thousand gathered outside St Leonard’s Church in Shoreditch. This is not vigilance against crime but it is a response from a community that recognises when support beyond the police and authority is needed. 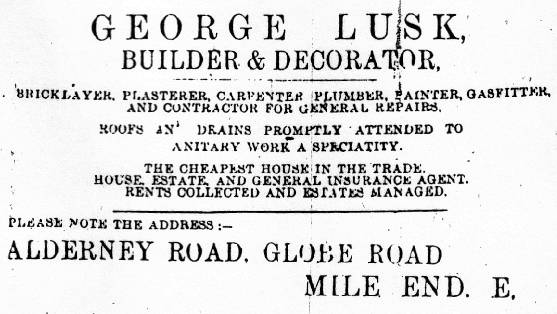 George Lusk died in 1919. His involvement in the Whitechapel Vigilance Committee reduced after 1889 but so had the incidence of murder in Whitechapel. His successor appeared to be more interested in self-publicity than protecting his community. The building company of George Lusk, which had once employed twenty men, also declined. Lusk was less prosperous than he had been. To concentrate on his campaigns on behalf of his community he may have neglected his business. His wife Susannah had died in March 1888.  Lusk was expelled from the Doric Arch Freemasons Lodge for non-payment of fees in 1889.  These two events have encouraged speculation even though much of it is groundless. But it is possible that the work of Lusk on the Whitechapel Vigilance Committee was an opportunity that allowed him to forget his grief as a bereaved 49 years old husband and also something that facilitated atonement for surviving his wife.  The lapse in paying his fees to the Masons may have been because he was short of cash but there are enough conspiracy theories about the Masons and Jack the Ripper for the fanciful to wonder about the cause of the rupture.