In Britain there are two government departments distinguished by euphemisms. The Ministry of Defence collects destructive weapons and uniformed warriors and uses both to kill troublesome foreigners, often in territories where there are natural valuable resources. The Home Office employs a police force to maintain order within the British homeland and to ensure that a comfortable establishment is not made too uneasy by excesses in democracy. Just in case the British people become suspicious the Home Office is denied a government minister. The person in charge of the department is called the Home Secretary. What could be less sinister than that?

Sir Henry Matthews was Home Secretary between 1886 and 1892. Opinion about his suitability was consistent and negative.   The Star newspaper described Matthews as ‘a poor and spiritless specimen of the race of smart adventurers who creep into politics by the back door.’ The rear entrance mentioned in the condemnation could have been a reference to the rumour that Queen Victoria had persuaded Prime Minister Lord Salisbury to appoint Matthews as Home Secretary. Later the Monarch stated that Matthews had ‘a general want of sympathy with the feelings of the people’. Somehow our titled equal opportunities employer and champion of democracy had failed to notice this trait when Matthews was appointed Queens Council in 1868.

Matthews preferred to trust senior civil servants rather than the police but even the men that Matthews relied on were unimpressed by him. Evelyn Ruggles Brise was Private Secretary to four Home Secretaries. He believed that Matthews was ‘quite incapable of dealing with men’. Nothing in the English language is quite as flexible as the word quite and its use by Brise should be noted. Home Secretary Sir Henry Matthews, like his Prime Minister Lord Salisbury, was a Freemason. Both were also members of the exclusive and expensive Athenaeum Club. There is a branch of the Athenaeum Club in Liverpool. The library has 60,000 books, luxurious rooms, and membership costs £1200 a year. Meals and drinks are extra. Most Liverpudlians are unaware of its existence in the centre of the City.

Before he entered politics Matthews was a capable barrister who possessed polished interrogative skills. His cross-examination of Sir Charles Dilke in a high profile divorce case appears to have impressed everyone including Queen Victoria. The cross-examination finished the political career of Dilke and his ambition to be Prime Minister. An ability to pick apart the decisions and motives of others is a blessing to a barrister but it can be an impediment to someone who is required to make decisions and allocate responsibilities. Indeed, Matthews may have felt he was being at his most steadfast and decisive when resisting the urging of others to take action. If there are some bureaucrats who believe that any decision is better than no decision, the majority lean towards believing that no decision is better than most decisions. Matthews belonged with the cautious.

Sir Henry Matthews was born in 1826 in Ceylon.   He never married but was described as charming and a ladies man. Perhaps his ease and confidence amongst both men and women meant he was unable to resist letting people dangle and this conceit or weakness prevailed both in his professional and social lives.  Metropolitan Police Commissioner Sir Charles Warren liked military uniforms and rank too much to be self-effacing. And he would have objected to being left to dangle by his Home Secretary. Despite a possible tortuous process Matthews approved several initiatives proposed by Warren. These included the reorganisation of the Metropolitan Police to include an increase in the number of inspectors and sergeants. There were, though, disagreements between the two men. Whether or not to give a reward for information about Jack the Ripper was a saga of inconsistencies and disagreements that haunted the Home Office from the 4th of September 1888 when the first request for a reward was lodged and refused. Mary Ann Nichols the first victim in the ‘canonical five’ was murdered on the 31st of August.   More serious than the arguments over the reward was the turf war between James Monro and Sir Charles Warren.   The forthright Monro was appointed as Assistant Commissioner Metropolitan Police in 1886. He was given responsibility for the CID and was also head of the Secret Department, which was known as Section D. The Secret Department managed internal security and monitored the activities of those that the Government regarded as subversives. These responsibilities gave Monro direct access to the Home Secretary.   Warren objected to one of his Assistant Commissioners being independent and having equal privileges. Monro felt he needed to keep his work discreet and, well, secret. Both men had a point, and a talented Home Secretary would have resolved the matter without too much difficulty. The solution, which was a long time coming, was to give the Secret Department managerial independence, and put someone in charge that had equal rank to the Commissioner Metropolitan Police. Instead, Matthews let the two men dangle.

The trio of Matthews, Warren and Monro did not operate as a successful managerial team.   This does not mean that their conflict prejudiced the Metropolitan Police investigation into the crimes of Jack the Ripper. The detection of the Ripper required sharp men on the streets and some luck. Senior policemen are nowhere near as influential as they think. Read the police reports of H Division that are available today, and they provide an account of a methodical but unimaginative approach to crime detection within the Detectives of Whitechapel. Suspects were interviewed when they appeared, and facts were evaluated. In the main, rushes to judgement were avoided. More decisive action by the Home Office, though, may have prevented the deaths of some of the Ripper victims.   This could have included extra police put on the streets sooner and clear instructions for the extra men on the beat.   Additional resources were invested into crime prevention but there is little evidence of a strategy about how those extra resources could be best used.   Monro managed undercover operators and he should have been able to improve the security of the citizens of Whitechapel.   The Secret Department was interested in security but, of course, the poor that walked the streets were not a priority for a Government led by Lord Salisbury. The poor could dangle in their slums.

If the record of Sir Henry Matthews is blemished, he was Home Secretary during a difficult period.   The mistakes made in the Jack the Ripper investigation occurred because of individual failure but also because there was little precedent for what had happened. Apart from trendsetting crime there was agitation on the streets for a socialist revolution. Meanwhile many of the rich and powerful not only indulged in licentious behaviour but were also part of an establishment that imposed a puritanical morality on ordinary people.   The result was a heady mix of sex, violence, indignation and accusation. 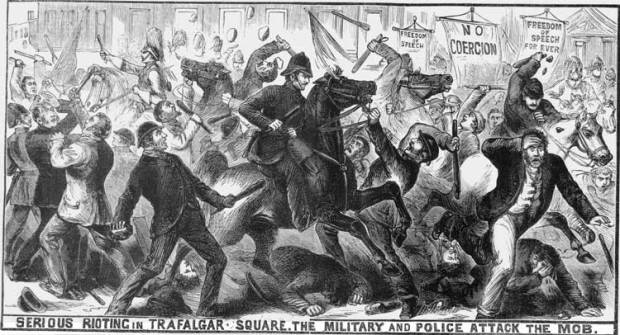 Bloody Sunday in Trafalgar Square in 1887 began as a protest against unemployment and the action of the British Government in Ireland. Sir Charles Warren remembered his colonial days and rather than keep the peace he waged war. 400 demonstrators were arrested, and 75 people were injured.   At least Warren and Matthews permitted demonstrations. Monro wanted them to be subject to a complete ban. There was also the Cleveland Street Scandal in 1889, which revealed a male brothel staffed by telegraph boys. The customers of the brothel were rich and included people important enough to avoid prosecution. The affair was covered-up but eventually exposed by Ernest Parke the editor of the radical North London Press. What followed was a main course in Victorian hypocrisy. The telegraph boys received light sentences, and none of their clients were prosecuted.   Parke was sued for libel and sentenced to 12 months in prison for exposing criminal behaviour that somehow did not require punishment. Sir Henry Matthews did not provide a moral lead in the affair. He looked after his masters. This was not difficult because it meant he could relax and do nothing. Matthews took a similar approach in the case of Florence Maybrick. In dubious circumstances Florence was convicted of poisoning her husband James. The arsenic in his body was not enough to kill anyone especially James. He was an arsenic addict that had developed a degree of immunity. The Press and public protested about the absence of evidence in the conviction of Mrs Maybrick.   Nowhere near as fastidious Matthews prevaricated and fudged. Florence Maybrick was left to dangle inside prison for fourteen years.

Matthews left the Home Office in 1892 and used his title as Viscount Llandaff to attend the House of Lords and do very little else in politics. He disappeared from public life. He died in 1913 at the age of 87.   His main concern as Home Secretary was protecting the status of the establishment he served and, just as important, himself.   Twelve months after his death the same people he protected took the British people into the first of two World Wars.