In 1911, twenty years after Charles Stewart Parnell MP died, they built an obelisk in Dublin. A statue of Parnell stands at the foot of the obelisk. Today the Parnell Society meets once a year in Parnell Memorial Park. And if that does not impress, his gravestone is marked with just one word, PARNELL. There are a few dead rock stars that have missed that trick. The admirers of Parnell described him as being ‘sparse with words’ but lethal in debate.   The British Tory Government of Lord Salisbury admired skilled debate but not when it came from its opponents. Lord Salisbury hated Parnell. He claimed that Irish Home Rule was the greatest threat to the British Empire since Napoleon.  Gladstone was different. He was sympathetic to the 57 Irish Nationalist MPs and their cause. He said, ‘There is no crime recorded in history which will compare for a moment with the means by which the Union was brought about.’

Sir Robert Anderson became Assistant Commissioner Metropolitan Police in 1888. He was an Irishman but there is no statue of him in Dublin. He was not sympathetic to Home Rule for his fellow countrymen and women. Anderson said that, ‘no one could suppose the United Kingdom will tamely consent to be swamped by a horde of paupers and agitators’.  He was concerned about threats to the income of the English landlords and their Irish descendants, the people that had created the paupers who were obliged to work as agricultural labourers.   In their first meeting the Home Secretary Henry Matthews told Anderson that it was his responsibility to find Jack the Ripper. In his memoir Anderson remembered his answer. ‘My answer was to decline the responsibility. I said, ‘I hold myself responsible to take all legitimate means to find him.’ Anderson was being a smart aleck and sidestepping responsibility.   His experience of law enforcement was shaped by his previous role in the Special Irish Department within CID and not always legitimate.

Charles Stewart Parnell set up an organisation called the Land League, which later evolved into something called a Plan for Campaign. Its purpose was to resist punitive rents and summary evictions. The landlords in Ireland, many of them absent landlords, felt unappreciated.   Arthur Balfour had become Secretary of State for Ireland in 1887. Although Parnell advocated non-violent protest throughout his career, Balfour declared the Plan of Campaign a criminal conspiracy. On the 18th of March The Times printed the first of eight articles titled ‘Parnellism And Crime’.   In the first article it was claimed that Parnell had ‘marched with murderers’.  Subsequent articles continued the accusation during the following weeks.   The final three articles alleged that Parnell had links with terrorists in the USA.  To accompany the articles The Times published a facsimile of a letter that Parnell had supposedly written. Five years previously Thomas Burke and Lord Cavendish had been murdered in Phoenix Park, Dublin. The Times used the facsimile as evidence that Parnell had excused his previous condemnation of the killings and also that he condoned the murder of Thomas Burke.

The facsimile was a forgery.   Anderson had a friend, a young Dublin journalist called Edward Caulfield Houston. This journalist did appreciate the landlords in Ireland, whether absent or not. Houston had hired fellow Irish journalist and muckraker Richard Piggott to investigate Parnell and to find anything incriminating against the Irish politician. Piggott, Houston and an academic called Sir Thomas Maguire met in Paris and plotted.

The accusations, which had begun in 1887, continued into 1888. Parnell avoided taking his accusers to Court but he denounced them in Parliament.   The Leader of the House, W H Smith, responded by setting up a Parliamentary Commission. Rather than it being an impartial enquiry it became a trial of Parnell. Lord Herschell objected to a Parliamentary Commission being used in this way. This did not help. Parnell was charged with conspiracy.

Anderson and his CID unit the Special Irish Department had the responsibility of collecting evidence that would support what had been alleged in the articles in The Times.  After he retired Anderson admitted that he had written some of the articles. Piggott had been required to make journeys between London and Paris.  He had been in the French Capital when Anderson was supposedly there on holiday and not worrying himself about the recent murder of the Ripper victim Mary Jane Kelly.  Holiday or not, something had given Anderson the necessary confidence to qualify his responsibility for catching Jack the Ripper. In retirement Anderson admitted that ‘we did a lot of illegal things’.

The Parliamentary Commission investigating Parnell had begun on 17th September 1888, the day after Annie Chapman was murdered in Whitechapel. The Commission charged Parnell and members of his Land League and Plan for Campaign with ‘a conspiracy seeking absolute independence from England, that they had promoted agrarian agitation against the payment of rent and they incited persons to sedition and the commission of crimes including murder.’ The first half of that does not sound so bad but the judges sat for 138 sessions and put 150,000 questions to 445 witnesses.  Those in authority wanted a conviction and they were serious enough to bend a few rules.

Not every English policeman was content with the action taken against Irish agitators. Undercover men had joined the Land League with the intention of persuading others to commit crimes. Patrick McIntyre described himself as ’late of the Political Department of Scotland Yard’. He said, ‘Not a single plot in England had not been incited by the Police’. John Daly had been imprisoned in 1883 for carrying bombs.   It may not have persuaded St Peter at the gates of Heaven but on his deathbed the Birmingham Chief of Police revealed that John Daly was innocent. In 1887, Richard Piggott visited Daly in prison. Daly was offered his freedom but not because he was innocent and the authorities were embarrassed by contrite police chiefs. If he wanted to leave prison, Daly had to accuse Parnell of supporting violent sedition. Daly refused the offer and walked back to his cell. Through unofficial channels Liberal MPs heard about the visit to Daly by Piggott.   The MPs demanded to know who had authorised the visit. Home Secretary Henry Matthews said not me, boss. The Secretary of the Prison Board said that somehow he had no idea what was happening inside one of his prisons. The Secretary was Sir Robert ‘I decline the responsibility’ Anderson. 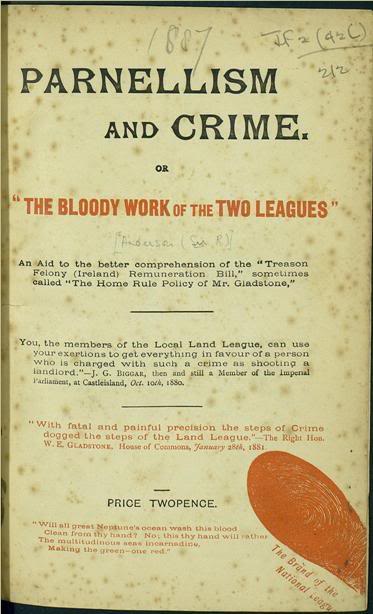 There was a further visit to Daly but the prisoner again refused to accuse Parnell.  He stayed in prison for another ten years and fourteen years after the Birmingham Chief of Police had declared him innocent. Meanwhile the Commission was doing its competitive best to be just as sordid. Hungry and desperate Irish agricultural workers were paid to appear in front of the Commission and testify against Parnell.  Liberal MP John Morley said the Commission ‘was designed for the Public outside the Court, and not a touch could be spared that might deepen the odium.’  On 21st February 1889, Richard Piggott testified before the Commission. His two days cross-examination exposed the journalist as a fraud. On the third day Piggott disappeared.  On 1st March 1889 he was shot dead in a hotel room in Madrid. The killing was reported as a suicide but on the 28th February The Times had reported that the Police had located Piggott.  People have argued about what may or may not have happened in the hotel in Spain but in terms of establishment guilt the argument is without consequence. Whether Piggott killed himself or was executed by his employers the motive for the killing was the same, to hide the truth about the crimes Piggott had committed against Parnell.  Dr Maguire, the academic who had plotted in Paris with Piggott and Edward Caulfield Houston, was reported in Reynold’s News as dying ‘suddenly and mysteriously’ on 2nd March 1889. Irish MP Thomas O’Hanlon in Parliament asked for a post-mortem to see if the previously healthy academic was poisoned.  The question was unanswered.

Meanwhile the Commission continued asking 150,000 questions. Parnell demanded that the accounts of the Irish Loyal and Patriotic Union be presented as evidence. The judges who somehow had approved almost 500 witnesses refused the request.  The Commission put on a stubborn show but closed without making accusations. Sir Robert Anderson did not appear as a witness before the Commission. There is no evidence to indicate that while he was in post as Assistant Commissioner he did anything to establish who had written the forged letter to The Times or fabricated the evidence contained in the articles in The Times newspaper. But, despite being attributed to a Times journalist, three of the eight articles had been written by Anderson. These three articles were titled ‘Behind The Scenes In America’. No doubt Sir Robert Anderson felt in this instance that he had more than acquitted his responsibility. In the investigation to the crimes of Jack the Ripper there was less enthusiasm from the man who was loyal to his Irish homeland, or at least the parts of it owned by his landlord friends.