Hedda Gabler was the sister-in-law that Walter White should have had.  With Hedda knocking on the front door Walt may have stood a chance.  Hedda would have provided a more sympathetic ear than Marie and Hank, his in-laws.  She may have even offered some encouragement.  The play Hedda Gabler was premiered in Munich in 1891.  Thanks to Henrik Ibsen the 19th Century German audience heard a Norwegian woman proclaim from her middle class drawing room that she had a need for ‘authentic excitement’.  Hedda is unhappy.  Her character has to cope with coiled up resentment and envy.  Walter White has the same problem which is why his protest plays a part in the deaths of nearly 200 people.  Because there is only so much wreckage that a woman can manage within a single play and in a middle class drawing room, Hedda is not as quite as destructive.  Walt had 62 episodes to roam over New Mexico and battle formidable foes.

Right now there are three English language versions of the play on film.  In each the actresses are tall.  Casting directors assume that height indicates strength and willpower.  Anna Gunn plays Skyler the wife of Walter White and she is also a tall actress.  At the end of Hedda Gabler the Ibsen heroine is defeated.  Lövborg the gifted and alcoholic author she loves has died but not in the romantic manner that Hedda had hoped.  Judge Brac knows of the role she played in the suicide of Lövborg and he is in a position to demand sexual favours.  The manuscript that a jealous Hedda burned is being recreated by her husband and Thea from the notes made by Lövborg.  The power that Hedda had over her husband is diminished, and Thea, the woman that Hedda had described as a little fool, is in a position to determine the posthumous fate of Lövborg.  Hedda had previously revealed that she yearned for the ‘power to shape someone’s fate’, which is one of the reasons she resents Thea. 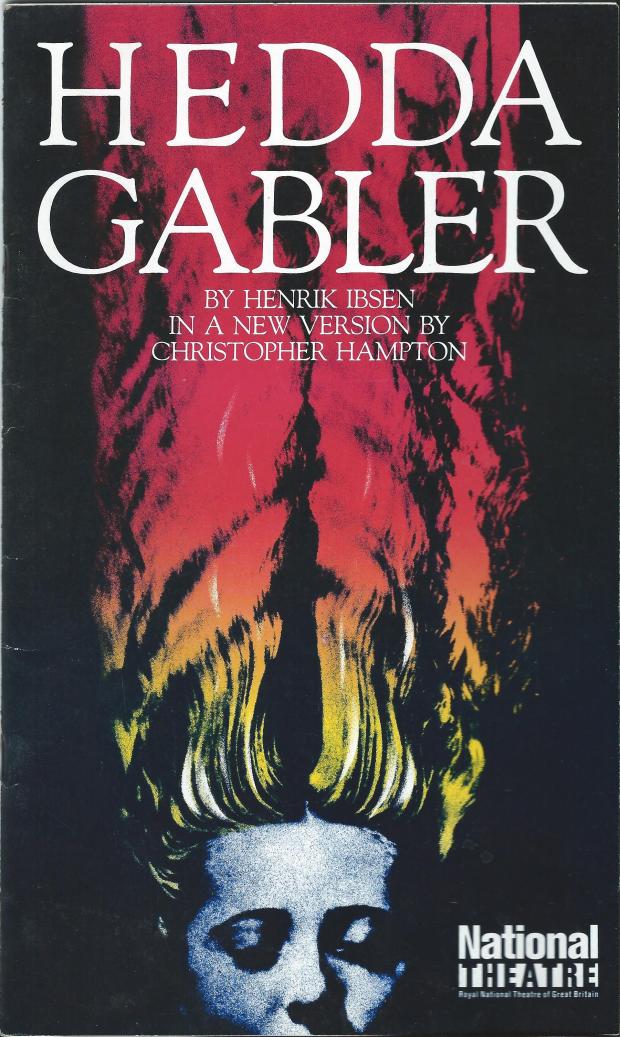 Pregnant and uninterested in the fate of her unborn child Hedda commits suicide. She shoots herself in the temple because she thinks it qualifies as an ‘act of perfection’, something beyond what she identifies as her only talent, an ability to ‘bore myself to death’. Her final words to a husband who is irritated by her playing the piano are ‘I will be quiet from now on.’

Hedda Gabler has frustrations with conventional domesticity and is haunted by a relationship with Lövborg that she remembers as ‘courageous and intimate’, a period in her life that revealed ‘a hidden world’.   All this echoes the contempt and misgivings of Walter White who is irritated by both his underachievement and suburban neighbours. But if the pathology of Hedda resembles the compulsions that inspire Walt, there are also similarities between Skyler and Hedda.  They are both tall women and prettier than their spouses.   Hedda is regarded as a ‘beauty’ and a catch for her husband.  Skyler is younger than Walt.  Skyler may not be quite as wilful as Hedda but in response to the news that Hank has cancer she assumes the authority to shape his fate.  Hedda lends her pistol to Lövborg so that he can commit suicide in what she regards as a romantic gesture and an acknowledgement of her worth.  Skyler insists that Walt has treatment that only has a slight chance of extending his life.  Both women regard their destiny as paramount.

Each of the two women has three men that have significance for them.  Judge Brack is unscrupulous, cynical and reckons that he he can tempt Hedda with adultery. The Breaking Bad equivalent for Skyler is Ted.  He helps Skyler to return to her old job and the two soon establish an adulterous affair.  Both Judge Brac and Ted are willing to be part of what the judge describes as a ‘domestic triangle’.  Judge Brac imagines being welcomed into the home of Hedda and her husband, and Ted is happy to be at the hospital while Skyler gives birth.  The husbands of Hedda and Skyler are men with academic expertise that has modest economic consequence.   Early in Breaking Bad and Hedda Gabler the economic fortunes of the husbands are reduced.  The prospects of Jørgen Tesman, the husband of Hedda, are undermined by the return of Lövborg who is a rival for the professorship that Tesman expected to pay for the large home that Hedda insisted he purchase.  The cancer treatment of Walter White is expensive and a threat to the White family budget.  Brother-in-law Hank may not be the creative and intellectual equal of Lövborg and throughout the 62 episodes there is nothing to suggest that Skyler imagines a relationship with the husband of her sister.  For that she prefers the slimmer and more handsome Ted.  But despite his bald head, large stomach and sometimes dumb remarks Hank is a reminder of the social and economic stability that Skyler might have achieved with a more settled man.

Skyler is not as easily defeated as Hedda Gabler but her battle is restricted to a destructive and discontented husband.  Hedda is foiled by a sly amorous judge, a self-destructive author and a husband that for all his ineffectiveness is blessed with decent purpose.  Walter White, who is obliged to exit both his family and his own life, is interesting because his character has elements of Lövborg, Tesman and Judge Brac, the romantic, the timid academic and the hard edged schemer.

Skyler does not reflect the men around her but Hedda Gabler is constructed by Ibsen to have the characteristics of the three men that shape her life and frustrations.  Brac and Hedda have self-serving ambition and a need for exceptional rewards.  Tesman wants and imagines he will have security and status.  What he wants he uses to tempt Hedda who has the same desires and calculates that her uninspiring husband will at least have a secure income and social eminence.  Her true soulmate, though, is Lövborg, the curious man that also needs excitement and is willing to witness the ‘concealed world’.  This is the genius of Ibsen.  He takes a flawed and unprincipled female character and utilises her frustration and subsequent doom to demonstrate a feminist argument against the oppression of women.   Hedda may have her limitations but she is no worse than the cynical, vain and deluded men that assume they are entitled to define the lives of their wives and lovers.

The real drama in Hedda Gabler happens outside the home that Hedda regards as a prison.   Like the women obliged to wait at home and listen to what the men have to tell them after their ‘carousing’, the audience needs the male characters to explain how Lövborg lost his his manuscript and met his death.  Yet not everything in the play Hedda Gabler meets contemporary expectations.   Ibsen appears to struggle with the notion that Hedda has perhaps greater potential than that of shaping the fate of others.  Admittedly Thea had abandoned her husband to work on the manuscript with Lövborg but she still resembles a self-sacrificial female who has taken too seriously a man with high regard for his opinions.  Although he may be referring to a brothel Ibsen also evokes the 19th Century women who in their salons helped young men swap ideas and discover their creative talent.  Lövborg actually dies in the salon of another woman, a red haired alternative to Hedda. 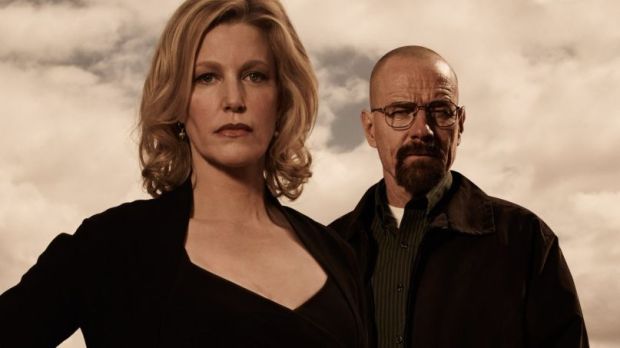 Not all the early reviews of Hedda Gabler were sensitive to the feminist message from Ibsen.  In some reviews Hedda was described as an ‘evil woman’ and a ‘monster’.  The adaptation that appeared on British television in 1981 has real merit but the screenplay was written by John Osborne, a playwright whose hatred of his mother and his wives appeared to have no limits.  The editing of Osborne plus the harsh performance by Diana Rigg add a drop of misogyny to the intentions of Ibsen.  But whatever the incarnation Hedda Gabler does not have heartwarming characteristics.  Neither Skyler nor Hedda are inhibited by the responsibilities of childbirth.  Hedda commits suicide and denies the prospect of life to her unborn child.  Skyler begans an affair while her second child is a still a baby, and the flirtation with Ted begins in the final weeks of her pregnancy.

In conversation Breaking Bad creator Vince Gilligan is approving of Skyler White.  He claims to be astonished by the hatred that the character has attracted from fans.  Skyler is decent without being a tower of strength but the end of Breaking Bad leaves a suspicion that Gilligan may have been as confused by Skyler as the rest of us.  Walt explains himself, ‘I did it for me.  And I was good at it.  I was alive.’  Skyler says nothing.  Her final thoughts remain a mystery.   As with the suicide of Hedda Gabler, the audience will have to think it through.  But if the silence of Skyler works as a dramatic device, it also defines her as someone who lacks the ability to recognise the frustrations of her husband and even his humanity.  Skyler does not have the burden of boredom carried by Hedda Gabler.  She has her adulterous affair not to escape her suburban existence but when it is threatened.  Skyler cannot understand or accept that her husband was an ‘unfree subject’ compelled to rebel.  Some people are different or as Hedda says, ‘These things seem to wait for me to do them’.  Skyler, though, should remain sympathetic to the audience of Breaking Bad.  Living with a manufacturer of illegal drugs, the woman had to endure much.  But the final impassive gaze from Skyler at the doomed Walt also suggests those early critics of Hedda Gabler.  Unable to understand how a victim can also be a victimiser they decided that the heroine of the play had to be a monster.

Howard Jackson has had nine books published by Red Rattle Books including novels, short stories and collections of film criticism.   If you are interested in original horror and crime fiction and want information about the books of Howard Jackson and the other great titles at Red Rattle Books, click here.