We all accumulate debts during a life, and, because none of us are self-sufficient, most of us can remember more than one debt that has helped us to survive.   I left one behind in Albuquerque to an attractive Mexican barmaid.  Thanks to an articulate lady of immense personal strength I was able to say goodbye to a hostile crowd in an Albuquerque bar and lose nothing but some of my dignity, a camera and the twenty-odd photographs I had taken around New Mexico.   Walter White is not the only male in Albuquerque who has felt the need for vengeance.  Walter raised the stakes.  I was almost as angry as Walt but left town while I still had two hands that could grip a steering wheel.  I drove out of New Mexico State and to Amarillo in Texas where I met a pest called George but that is another story.

The abbreviation ABQ for Albuquerque has been credited to the painter Georgia O’Keeffe.  The ABQ episode of Breaking Bad climaxes season two, and somewhere around the conclusion Jane suggests to Jesse that they visit a local gallery to look at a collection of paintings by O’Keeffe.  The painter was born in New York but she included in her portfolio a few New Mexico landscapes.  The ABQ episode is remembered for the plane crash that kills 167 passengers, the pink teddy bear that falls in the swimming pool of Walt and the moment when Walt does nothing to prevent the death of Jane.   The episode title honours the abbreviation favoured by Georgia O’Keefe.  In a show that specialised in cryptic pre-credit teasers 737 Down Over Albuquerque would have been not quite right for the Breaking Bad brand.  It may also have alerted too many viewers to the plane crash engineered by the real life drug dealer Pablo Escobar.

Albuquerque was established in 1706.   Just over three hundred years later the town has a population of 552,000 people.  Even though Walter White is now dead the town still has its problems.   The gun death rate in New Mexico is 40% higher than the national average of the USA, and in case not everyone has noticed the States is not a best in class leader for minimising gun deaths.  Billy the Kid moved to New Mexico when he was fourteen years old.  Like Georgia O’Keeffe, he was born in New York City, and similar to many other famous men he lost his father when young.  And like me, he had some support from a Mexican woman although in his case it was more substantial, more serious and longer lasting.  She did not, though, prevent Billy the Kid from being killed by Pat Garrett seven years after he had arrived in New Mexico. 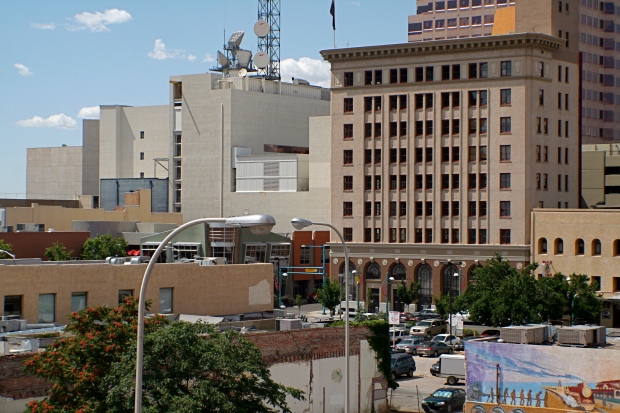 Some people would worry about the number of people being shot down on the modern streets of Albuquerque but the local police force has a reputation for nihilistic stubbornness and corruption.  20% of the population of Albuquerque lives below the poverty line and while that lasts there will be a good crystal meth market for wannabe Walter Whites to exploit.  People who have left Albuquerque to live elsewhere say that the people who remain in the city are distinguished by a lack of ambition.  Albuquerque is isolated.  The nearest city is a four hour drive away.   The mountains and the dry desert air provide consolation but the isolation means that in the commercial and social life of Albuquerque the stakes are not so high for its citizens.  The difference between the affluent and the very rich is not as great in Albuquerque as it is in some American cities.  This can be relaxing for the adults of Albuquerque or at least those who are living above the poverty line.   For the pesky teenagers of affluent parents, though, it suggests dullness.  This may be why the young are tempted to use narcotics and contribute to the widespread drug problem.   As did Walt, the children of the poor have their own and very different reasons.  Few dispute that the family is important to the citizens of Albuquerque.

Over the concrete dwellings there is a cable car that gives good aerial views.  The Sandia Peak Tramway travels 2.7 miles and takes the less athletic into the mountains and as high as the 10,378 foot Sandia Peak.   There are various mountain trails.  La Luz Trail is an eight mile hike and arduous.  If the mountains around Albuquerque are impressive, the strong winds can be a nuisance.  The air, though, is fresh and warm.  In a couple of episodes Walt wanders on to sandy slopes in between rocky mesas but mostly the mountains in Breaking Bad redefine a distant horizon.

Apart from the scenic blessings there are man-made sights.   While still a small scale meth manufacturer Walt sets up a meeting with his street level distributors.  They discuss plans in the National Museum of Nuclear Science and History.  The setting implies criminal escalation and apocalyptic consequences.  Elsewhere the old town of Albuquerque is fey and contrived but after sacrificing a half decent camera I can think of worse places in the city to relax and have a beer.  It may have been my experience of the old town that made me less alert in the rest of Albuquerque.

The most popular destination in the city is the home of Walter White.  Breaking Bad Tours have boosted the economy of Albuquerque.  Not all but some of the tourists like to imitate Walter White and throw giant pizzas on to the roof of the suburban house.  The cliché is that Albuquerque is a key character in the Breaking Bad TV series.   The location is important but comparing the town to a character is sloppy thinking and an exaggeration.  The original idea was to have somewhere in California where Walter White could pursue his exploits and make his family suffer.   This did not happen.  Albuquerque was probably chosen as a location for Breaking Bad for financial reasons.  Los Angeles was not suitable for a TV show that had some Western themes and suggested a hero tempted to reclaim undomesticated masculinity.   Filming in a small Californian town would have been almost as expensive as Los Angeles.  Albuquerque was a cheaper option.  If financial restrictions affected decisions as to what additional sourced music could be added to the soundtrack then the choice of the film location would be important.

Albuquerque does, though, add ambience to the episodes and it provides a fitting context for the adventures of Walt.  The city has blue skies that are often clear, and when they are not they have bright white clouds.  Outside of town and below the blue skies there is a wide expanse of desert and tall mountainous vistas.  Add the occasional filter to the camera lens and this emptiness dazzles the eyes of the Breaking Bad audience and torments frustrated Walt.  The landscape exists as a permanent and relentless alternative to the restrictions of domesticity.   There is a moment in the episode 4 Days Out when Walt and Jesse stop after a day of hard work, take a breath and stare at the desert sunset.  The obvious filter on the lens is disconcerting and had to be used for practical reasons.  Yet the tint does not prevent the shot from being memorable and important.  The two crystal meth makers may be tired but standing on tired bones and in the middle of the desert they are able to respect and admire an uncompromising and spectacular landscape.  A silent paternal environment acknowledges their efforts.

It is to their credit that the writers of Breaking Bad are never tempted to incorporate the tourist spots of Albuquerque as visual ornaments.  Away from the mountains we see a lot of utilitarian concrete.  If Walt, his partners, enemies and rivals make the way into the desert, it is because they need isolation and to do something they should not.  The tourist attractions of Albuquerque are avoided.  When he is behaving himself, Walt is restricted to dull suburbia.  The houses used in Breaking Bad are authentic which is why we should feel sorry for the poor sod who has to scrape the pizzas off his roof after the tourists have disappeared.   But the suburban locations used in Breaking Bad can be found in the outskirts of any city in the USA, Europe and even the more affluent neighbourhoods in South America.

Throughout the five seasons the Whites and the neighbours show little inclination to socialise beyond their own homes and swimming pools.  The scene where Walt over a beer meets the father of Jane is memorable for various reasons.  It is also a rare example of a character in Breaking Bad visiting an Albuquerque bar or restaurant.   No wonder Walter White looks so uncomfortable when he has to visit Gustavo Fring in the fast food diner Los Pollos Hermanos and talk business.  The real alternatives to modern Albuquerque suburbia for a would be Western hero are not modern bars and restaurants but empty places like the open desert landscape where Walt and Jesse take their recreational vehicle to first make meth.  Over a hundred years before a young Billy the Kid rode through this New Mexico landscape.  He needed to escape his enemies but also those who were doing their best to establish the ubiquitous concrete suburbia that followed.