No doubt about it, Quentin Tarantino can write dialogue.  Yet there are moments in Pulp Fiction when a few must have wished that he might just write a little less of the stuff.  The characters in Pulp Fiction may be amoral and poorly educated low life but they do natter.  The more interesting amongst them are loquacious.  The rest are verbose.  Pulp Fiction has comic moments and real invention but its scenes are often over extended.  Audiences expect gratification from Tarantino, and his talent and fondness for gratuity mean that they are not disappointed.  But his movies also demand that viewers listen and have patience.   The writing team of Breaking Bad pays homage to Pulp Fiction and also borrows some ideas.  More important than what was borrowed is how the writing team on Breaking Bad recognised that the audience of Pulp Fiction had the patience to listen and anticipate subsequent action, comedy and mystery.  Pulp Fiction may be over-extended but it also has a creative energy that inspired trust in its fans. 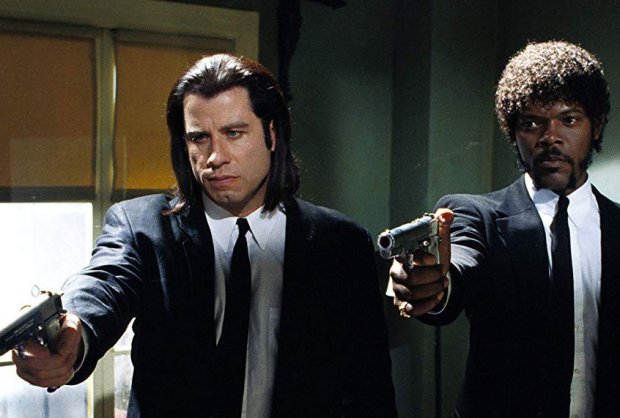 The original writers of pulp fiction, or at least those who wrote noir crime novels, may have created the odd comic moments but their vision was dark and gloomy.  Think of the warped desires of the characters created by Jim Thompson and James M Cain. Such fiction did more than earn its writers a few dollars.  It protested against the inhumanity of the modern world.  Tarantino is different.  He celebrates what the noir authors condemned.  The original pulp fiction existed in slim paperbacks.  Tarantino is not a creator of pulp fiction.  He thinks of himself as an artist, an author with a postmodernist sweep whose movies run for 154 minutes or more because he is obliged to reveal his cinematic investigations.  Pulp fiction writers were not interested in sharing literary memories.  They told tough taut tales. 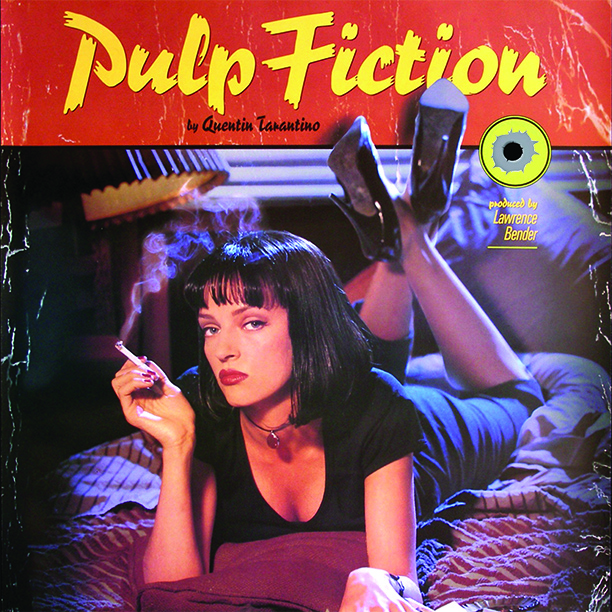 Breaking Bad mimics Pulp Fiction.  Without the movie by Tarantino the TV series by Vince Gilligan would not have existed in its present form.  The two men, though, appear to be different.  Tarantino regards himself as a singular talent, an auteur.  Vince Gilligan stresses his role as a member of a productive team.  In media interviews Tarantino is unperturbed by accusations that his movies incite violence in the impressionable.   He is more concerned with what he regards as his right to express himself as an uninhibited artist.  Gilligan is adamant that no one is hurt in the making of his TV shows.  The welfare of his cast is more important to him than what will appear on the screen.

In the 1960s when censorship restrictions were being challenged the main argument was that film makers should be allowed to create serious and authentic representations of sensitive human souls.  No one mentioned that we would be soon sitting in cinemas and listening to audiences howl with laughter as bullets were pumped into innocent bystanders.  Pulp Fiction appeared in 1994.  Vince Gilligan would have been 27 years old when he saw the movie in a cinema.

Listen to Gilligan and then watch Pulp Fiction and you realise that in his generation there are responsible and quite pleasant men and women who have no qualms about watching a movie whose comic elements consist of murder, drug abuse, anal rape and torture.   It is modern slapstick.  In a Tarantino film violent excess is the alternative to the absurd banana skin comedy of Chaplin and Keaton.  Even the excessive dialogue of Pulp Fiction drifts into prolonged verbal slapstick.  It is all designed to make us blink and catch our breath.  Gilligan may be more socially responsible than Tarantino but both men share a taste for comedy and excess.  Walt and Jesse begin their criminal relationship as a comic couple.

Vince Gilligan has insisted that the incidents in Breaking Bad were determined by what was happening inside the heads of the characters.   Characterisation shaped the plot.   In Pulp Fiction the characters exist within an obvious artefact and as stylish affectations.  Their fates have little consequence for viewers waiting for the next laugh or thrill.  Yet the cool mask of director Tarantino does slip in the last scene of Pulp Fiction.  The confrontation in the coffee shop between Jules and Pumpkin is either silly or brilliant.  There is much to admire in this final conversation but when Jules talks of morality and fate it does feel like a lecture from a self-deluded drunk.  Tarantino is no humanist and even existentialism appears to have passed him by.

The style of Breaking Bad may conform to what Tarantino has defined as modern cinema hip or cool but Gilligan is also a conservative that warns against unintended consequences.  What happens to Walt in Breaking Bad is examined from both humanist and existentialist perspectives.  There is existential relief for Walt when he dies.  By then, though, Gilligan and his writing team have lost all sympathy for Walt and his previous need to reject suburban conformity and feel alive.  Walt is condemned for not understanding his humanist responsibilities.  The lives of other people, and not just our own, are important.  There are tragedies in Breaking Bad, the murder of Hank, the fate of the family of Walt, the death of Jane, the suffering of Jesse and last but not least a crashed aeroplane full of passengers.  The deaths in Pulp Fiction are either comic or ironic.

If different animals, Tarantino and Gilligan are united by their interest in form.   Both feel entitled to remind their audiences that what is on the screen is not real.  They revel in cinematic magic and accomplishments such as tricky montage and odd point of view shots.  We watch the opening scene of Pulp Fiction and wonder whether it belongs to the earlier movie Reservoir Dogs.  The same self-reverence exists amidst the teasers for Breaking Bad.  The teasers not only anticipate subsequent episodes but include flashbacks that provide additional information on scenes that have been forgotten.  Using musical clips from different genres and eras was pioneered by Martin Scorsese but the practice is extended and improved in both Breaking Bad and Pulp Fiction.  Tarantino and Gilligan also use time shifts to complicate narrative structures.  The two men even resurrect dead characters for subsequent scenes.  Despite her reappearance all Breaking Bad viewers realised that Jane had previously died.  But there will be someone in a cinema somewhere who has forgotten that Vincent Vega was murdered long before he sauntered out of the coffee shop at the end of Pulp Fiction.

The teasers before the credits in Breaking Bad are important because they compel the viewer to be curious.  In Pulp Fiction the four stories might be teasers for an alternative movie that is waiting on a studio shelf somewhere. The teasers of Breaking Bad and the episodes of Pulp Fiction not only tell brief tales but remind us that these characters have other unknown elements to their lives.

Foreshadowing, incidents that will make more sense later in the story, exist throughout Breaking Bad.  They are not just restricted to the teasers.  The poison that is eventually used to murder creepy Lydia in the final fifth season is created by Walt in season two.  Foreshadowing is also important in Pulp Fiction but Tarantino relies mostly on dialogue to alert viewers about what might happen later.  Foreshadowing is an ubiquitous technique that prevails in the work of people other than Tarantino and Gilligan.  It is what writers do in order that viewers can follow what is happening on screen. 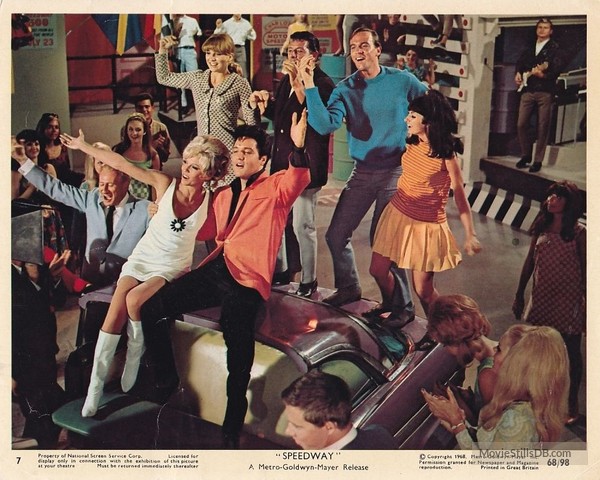 Postmodernist theory consists of the notion that our culture can only recycle what has already been created.  The theory arrived after movies appeared in the 20th Century.  Cinema is an art form that often recycles what has been created in novels and on the stage.  Cinema and modern popular music are important to postmodern theory.  Movie directors defy the postmodernist trap by adding emphasis to the theory and paying homage to the work of other directors.  There are numerous examples in Pulp Fiction.  The opening scene evokes both film versions of the Hemingway story The Killers.  Fans of the important American postmodernist Elvis Presley noted that the fifties style restaurant in Pulp Fiction was modelled on a set from his routine movie Speedway.  Homage in a movie demands that Alfred Hitchcock is acknowledged.  Pulp Fiction recalls Psycho and the revelatory moment when Janet Leigh sees her boss cross the road.   The work of Tarantino refers more than most to other movies.   The oddest example in Pulp Fiction remembers the great Mickey Spillane adaptation Kiss Me Deadly.  Pumpkin may think that the bright light inside the suitcase of Jules is beautiful but the moment has no connection to anything else that happens in Pulp Fiction.

And what feeds will also provide food for others.  This is either a universal rule invented by hunters or a really old postmodern theory.  In Breaking Bad homage is paid to Pulp Fiction.    Mr Wolf is a ruthless and sour hard case who is employed by gangsters to clear up messes.  He helps Jules and Vince dispose of the human being whose sloppy remains are pasted over the inside of their car.  Mr Wolf is recreated in Breaking Bad as world weary Mike Ehrmentraut, and the removal of the sloppy remains of a victim of Walt dominates an episode of Breaking Bad.  It may not be intentional homage by Gilligan but both Butch in Pulp Fiction and Jesse in Breaking Bad are devoted to dubious, winsome, quirky and destructive women.   Whatever the intentions of Vince Gilligan the cinematic style of Breaking Bad not only honours Pulp Fiction but captures its kinetic energy.   This is apparent from the photogenic gloss given to the preparation of heroin.  Adding all this to a drama that has psychological themes that have been compared to Chekhov could have ended in failure.  It did not.  Vince Gilligan had his cake and ate it.