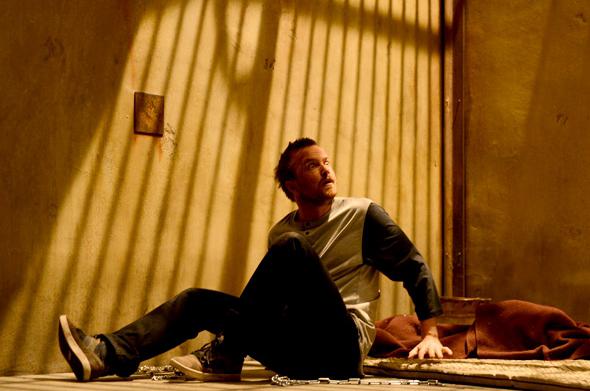 Despite what Shakespeare writes and Hamlet thinks, to be or not to be is not the question.  To be or not to be is a question, one of many.  How to live may be just as important a question as whether to exist.  Fans of the play have even spent more time discussing the sanity of Hamlet than the purpose of existence that he ponders.  For them that is the question.  Hamlet acts strange, and in Breaking Bad Jesse Pinkman kills people and broods afterwards.  Neither William Shakespeare nor Vincent Gilligan, the leading writer behind Breaking Bad, are adamant about their existential heroes.  The two young men make serious mistakes but their doubts and actions also suggest worth.  Hamlet and Breaking Bad are ambiguous tragedies.

The famous to be or not to be speech, when listened to more than once, sounds more like a call to arms than a contemplation of suicide.  The speech is gloomy but it also exists as an alternative to the battle rousing of Henry V.  A life can be sacrificed in a cause because a life does not amount to much.  The protests of Shakespeare are, we are told, against the limits of human nature rather than political systems.  The same has been said about Vince Gilligan.  And yet Hamlet can be interpreted as a protest against the legacy of religious intolerance left by Henry VIII, and Gilligan pricks at the absurd American health system and challenges modern faith in meritocracy. 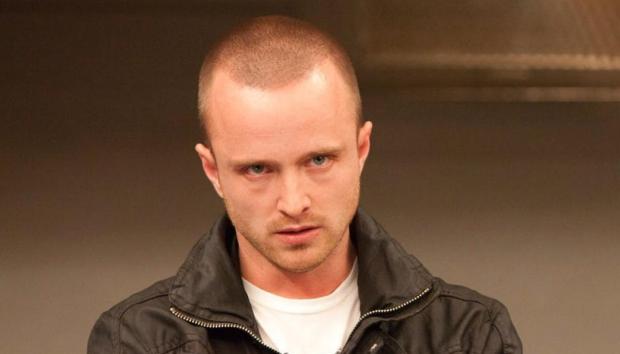 Hamlet and Jesse have their limitations but they are not cowards.  The two men have moments that are heroic but their heroism is spasmodic and ill prepared.   Hamlet and Jesse are young and sensitive.  Their misfortune is that they are overwhelmed by the force and corruption of the powerful and established.  They exist in worlds or dynasties ruled by unpredictable psychopaths.   More than once Jesse becomes indignant about the behaviour of Walt.  The other criminals and villains in Breaking Bad worry Jesse and at times make him distraught but they do not inspire the same indignation.   Walt is the man that makes Jesse angry, and Claudius has the same effect on Hamlet.  Walt and Claudius may only be substitute fathers but they inspire in their acquired sons the universal resentment of offspring.

Hamlet and Jesse also have specific grievances because Walt and Claudius kill people that the two young men have adopted as part of their families.  Walt poisons Brock, the son of Andrea who is the girlfriend of Jesse.  Before that Walt lets previous girlfriend Jane die rather than intervene to save her life.  Claudius also wounds Hamlet in two ways.  King Hamlet appears as a ghost to tell son Hamlet that he has been murdered by Claudius.  This really annoys Hamlet but almost as irritating to the Prince is the knowledge that villain Claudius is now sleeping with his mother.  ‘She married.  O, most wicked speed, to post with such dexterity to incestuous sheets.’ 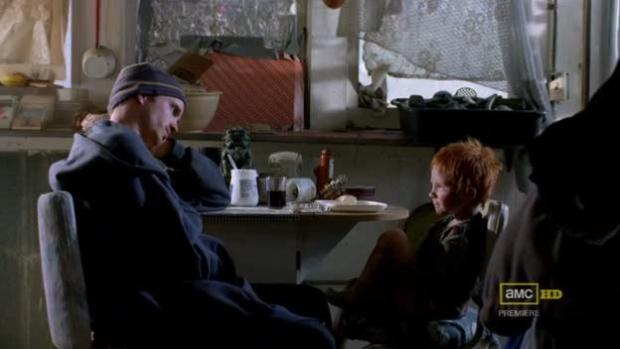 If Hamlet and Jesse may dither and delay, they eventually obtain revenge.  The inconsistency of Jesse is rooted in his economic and emotional fragility.  Without professional qualifications Jesse needs illegal meth making to help him prosper.  He also seeks the familial comfort denied him by his mother and father which may be why damage to children provokes in Jesse anger and resistance.  But to revolt Jesse needs trigger points.  The dithering of Hamlet is complicated.  Laurence Olivier described Hamlet as a man who could not make up his mind.  Not everyone who has seen Hamlet will share this opinion.  It depends on the version they have seen.  The unedited version of Hamlet lasts for over four hours.  Kenneth Branagh filmed the full text.  There is little evidence of cinematic talent in the films directed by Branagh but he does know how to add clarity to Shakespearian language.  Most people know the shorter versions.   Most, including the Olivier movie, last around two and a half hours.  The Russian 1964 adaptation runs at two hours and twenty minutes.  Leaving space for cinematic spectacle and the luminous black and white photography that blesses the best of Russian cinema means a much reduced text.  In this adaptation Hamlet is handsome, has great blonde hair and, although understandably prickly, is a half decent warrior.   The Russian version of Hamlet is not a Marxist masterpiece like Soy Cuba.  Unlike that film it makes no attempt to equate revolutionary responsibility with consciousness.  The Russian attempt at Hamlet, though, is informed by a Marxist imagination all too aware of oppression and what motivates the powerful.

Now the editors and adaptors have appeared Hamlet is whoever we want him to be.  And we all have our wants.  Mine are informed by the suspicion that Hamlet is a rationalisation by Shakespeare of his compliance with an oppressive Protestant dynasty.  He cannot oppose through militant action but he uses the messages in Hamlet to provoke misgivings in his audience.  This, of course, is what Hamlet does with the play that he has performed in front of his mother and Claudius.   When watching the play, I expect to see a rational and highly intelligent protagonist take his time in deciding what to do next.  I assume Hamlet is a sympathetic man distinguished by doubt.  Let an actor overdo the angst or what he perceives as silliness and I become irritated.  People differ about which Hamlet they prefer but this desire for the interpretations of Hamlet to conform to expectations affects more people than me.  Other roles, either in Shakespeare, do not inspire this sense of ownership in the audience.   In the same way Walt, Jesse and Skyler have loyalists and detractors.   Because the series inspired strong feelings about individual characters, actress Anna Gunn had to endure unforgivable vitriol and abuse on social media. 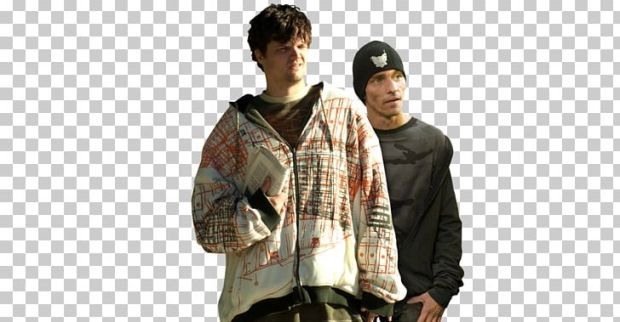 We have no idea of how seeing Hamlet affected the writers of Breaking Bad.   The similarities that exist in the plots and characterisation are probably no more than inevitable coincidences.  Jesse spends a lot of time sitting on the floor, and so does Hamlet.    Jesse and Hamlet are both young men, and what we do know is that young men have their mates.  In the case of Hamlet it is Guildenstern and Rosencrantz.  Jesse has Badger and Skinny Pete.   The two mates of Hamlet arrive as old friends but they are secretly working for Claudius.  Badger and Skinny Pete do not betray Jesse yet their lives interact because of opportunism and mutual advantage rather than loyalty.   Long after Jesse has disappeared Badger and Skinny Pete help Walt intimidate Gretchen and Eliot.   They appear to have little curiosity about what has happened to Jesse.

Young men also like to have girlfriends.   The conscience of Jesse is haunted by what happens to Andrea and Jane.  He does nothing to harm them but they become victims because of his meth making activity and colleagues.   To feign madness Hamlet denies his love for Ophelia.  This wounds her heart but what follows is much worse.  Hamlet mistakes her father Polonius for Claudius and murders him.  This somewhat serious error by Hamlet occurs because Polonius is hiding behind a tapestry in the bedroom of Gertrude.  In grief Ophelia commits suicide.  And if you believe all that you will believe anything.  Many have complimented Hamlet on the plot structure but the death of Polonius is too contrived and also contradicts the cautious nature of Hamlet.

Filling 62 episodes of a TV series will stretch any plot.  Why Jesse has no money laundering concerns and Walt is preoccupied by them is one of many implausibilities in Breaking Bad.  Shakespeare also had his blind spots.  Somehow he felt it necessary to have Laertes and Fortinbras unnecessarily intrude in a domestic dispute.   Take those two out of the plot and the drama would have been more cohesive, an intense tale of a destructive and dysfunctional family.   Shakespeare could have still had his four hours of text.   Claustrophobic theatre about wrecked families and tortured introspective characters did Eugene O’Neil no harm.  Like Hamlet, the two sons in Long Day’s Journey Into Night have long speeches.   Like Jesse, they brood.

All four young men have desires that go beyond wanting simple revenge.   They have a compulsion to discover the truth and expose what they regard as hypocrisy.  All four feel betrayed because of the lies they have been told.  Jesse is the least articulate of these very different characters but his demand for explanation is perhaps the most poignant.  At one point he objects to the lies that Walt tells.  Jesse realises he is being manipulated.  He pleads to Walt, ‘Why can’t you just come here and ask me to do you a favour?’  There is no answer from Walt but the audience knows why. Deceit defines the nature of Walt and everyone else who struggles to consider others as equals.  No wonder we confuse and abuse one another.  Hamlet has the same need for untarnished explanation but his accusations include the mystery of existence and the world around him.  It Is not difficult to imagine Jesse and Hamlet sitting on the floor and surrounded by other young people, all of them high on some illicit substance.   Hamlet is talking too much as usual.  The rest of the people at the party are not as communicative and they listen.  ‘I know not what seems,’ says Hamlet.  The people around them nod their heads, and someone lights a crystal meth pipe.