I’ve told you everything I know.  How many times do I have to tell you, Detective Hanna?  What’s the point?  The men are all dead.  You heard the witnesses.  The news was all over the TV.   There’s nothing to tell.  I don’t know anything about any robber that escaped.  Aren’t you tired?  I’m tired.  I’m really tired.  I also have a thirst.   Yes, a coffee would be fine.  Thank you.  No, I don’t eat donuts.  No, thank you.  If you want, if I have to, I’ll start again.  You can tell me if I miss anything this time.  Wouldn’t that be nice?  You must know all this better than me.

I met Neil McCauley in a restaurant while I was on my lunch break.  The place was crowded and he sat down next to me.  He was reading a book.  I like that, people who sit in public places and read, people who don’t need to talk all the time.  I had seen him before in the bookshop where I worked.  He never spoke to anyone, mumbled thank you when he bought a book.  I was curious about him.  He didn’t look like a typical customer.  I was used to shy men in bookshops but Neil had confidence as well as his streak of shyness.  He was quiet and without fear.  I was more curious than interested.  You understand me, Detective Hanna?

Because I was and had been curious, I asked him what he was reading.  I didn’t ask him what he was eating.  I asked him what he was reading.  Neil was annoyed that I had interrupted his lunch.  He was sharp with me to be honest but then I told him I’d seen him in the bookshop and he apologised and we talked.  I think he was flattered that I remembered him.  I did most of the talking.  Neil asked a lot of questions, always.  I liked the way he listened and waited for me to finish.  I’d never met a man who asked so many questions and was so attentive.   He was older than me but that wasn’t a problem.  It might have been if he’d been a selfish man but he wasn’t.  I talked, and he listened.  But what we had wasn’t all about me.  I felt something for him.

Until that day of the bank robbery I had no idea he was a criminal.  I thought he was a salesman like he said.  I don’t like salesmen usually but Neil read books and he appeared to be interested in what he said he sold.  What?  He said he sold solid metals.  I knew nothing about stuff like that.  I do think he had a curious mind.  I told myself he had.  Neil had a good memory.  He remembered everything I said.  We were a pair of home birds.  We had quiet evenings.  I would play a CD, and we would both read.  Men who are mysterious are much more attractive than men that you know.  Neil was too quiet to be a salesman.  I should have realised. 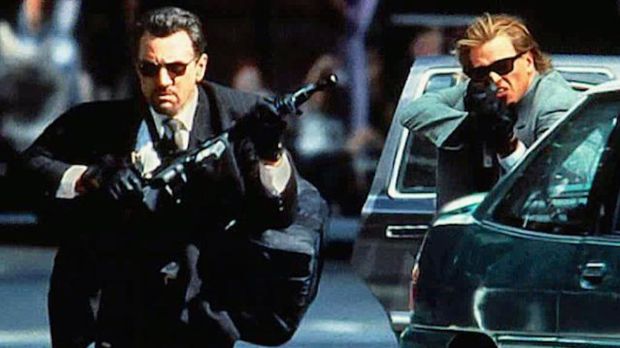 Thank you.  Are you sure this is coffee?   My God, no, I don’t want any sugar.  He didn’t mention you, Detective Hanna.  He didn’t mention anyone, ever.  Neil told me he had no family.  His mother had died, his father had absconded, and he had lost touch with his brother.  Neil said that, being a salesman, he was too busy working to make friends.  I did wonder about that but I liked the quiet life, and you believe what you want to believe.  He didn’t want to meet my friends but neither was he possessive.  I put that down to him being quiet and shy,  I liked him being like that because of what I do in my spare time as a graphic designer.  With a lot of my friends I am hustling for work.  I wanted to keep that stuff private.  The people I know talk a lot.

Neil was generous.  He had a fine apartment, and I spent a lot of time there.  I kept my own place.  If he had been younger, I might have given up my apartment.  I suppose I must have had some doubts about him.  There are days when you appreciate the remoteness but there are moments when you wonder.  You understand me?  Are you married, Detective Hanna?  I’m sorry.  I wouldn’t have asked if I’d known.

Is that right?  I didn’t even know he’d been in prison, never mind two of them.  I’m just thinking, sorry.  What kind of mark does that leave on a man, and what kind of man is prepared to go to prison.  Everything about Neil was so precise and neat, not just him being tidy.  Neil could sit still all night if he had to, read his book and not even move in his armchair.  But if he did anything, it was like he had it timed to the split second.  I found that attractive.   No, I’m not like that either, Detective Hanna.  You spill things as well.  We have something in common then.

I didn’t know other people set up jobs for him.  Is that how it works? Well, I didn’t know that.  I don’t mix with criminals.  When I was sitting in the car waiting for Neil, I wasn’t thinking about how he did his work.  No, I thought about the poor people who had been killed in the bank robbery.  And how he lived with it, and how in the future I would have to.  Neil said the killings were in self-defence and wouldn’t have happened if there hadn’t been trigger happy policemen.  I sat there thinking about what had happened and wondering just why I was there in the car waiting for a man that I knew nothing about but a man I was as close to as anyone I had ever known.  Are these what you want to see, Detective Hanna, my tears?  Yes, thank you, a tissue would be fine.  No, not another coffee.

Neil said we could have a new life in New Zealand.  He would set me up with a new studio for my graphic design work.  He mentioned New Zealand a lot.  He had this idea that the States was a dirty wreck of a country and that New Zealand would be fresh and clean.  Neil said it would be a good place for the two of us to grow old.  I thought it might be, the two of us getting old and staying in love and breathing fresh air.  I didn’t know it was just his escape route, nothing more.  I feel such a fool now.  But I also hate the idea of him being dead.  I hope he died thinking it was worth it.  I spoke to him that day in the restaurant because I was lonely.  Neil wanted fresh New Zealand air, and I wanted a quiet clean man.

I remember one day when it was my turn to ask Neil questions.  I asked him why he sold solid metals.  Just listen to me.  It doesn’t even make any sense.   Nobody makes a living selling solid metals.  But we believe what we want to believe.  Neil said he did what he did best and that he wouldn’t want to do anything else.  I thought it was an odd thing for a salesman to say.  He also told me he had this dream of drowning and that he would die in the middle of the dream and not wake up.  I remember him waking up in a cold sweat and me hugging him back to sleep.

Maybe that was why I was waiting in the car.  I thought that whatever he’d done he would need me.  After he told me about the bank robbery I ran away and Neil chased me and dragged me back.  Later, he said I could go.  But by then I had changed my mind.  Neil said he didn’t want to go anywhere without me but I could leave if I wanted.   I let him hug me and I felt that he was all that I am or would be.  He was the missing jigsaw puzzle for me.  That was why I waited in the car outside the hotel and stayed there even after the fire alarm which I knew was something to do with Neil.  I told myself there was no alternative to us being together.  It was just the way it is.  But then Neil walks out of the hotel wearing a hotel uniform and he walks straight past me.  And I realised that’s all I was, an alternative and that the next woman he meets will be just another alternative.  Maybe that’s all we ever are, alternatives to what could have been.  You understand me, Detective Hanna?  You’ve been married how many times?  If you’ve had three wives, you should know about alternatives.  I can’t drink this coffee.  Is it possible to have a glass of water?

Detective Hanna, you remind me of Neil, all this talking I’ve been doing and you just sitting there, asking questions and listening like he used to.  You say you want to find the missing robber and that there are other accomplices but you look to me as if you’re just curious about what Neil was like.  What am I going to do next?  Oh, I’ll go home.  I assume I can go home.  I’ll try and relax and do some design work.  A couple of my designs have been used on CDs.  It’s not work I can live on.  At some point I’ll make myself a decent coffee and think about starting again, I suppose.   Work, relax, phone my mother, think about what’s happened.  It’s not as if I don’t have alternatives.  What are you going to next, Detective Hanna, now Neil is dead?  What’s your alternatives?