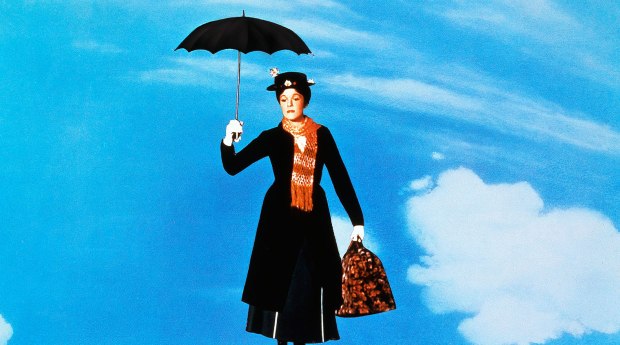 The movie, Saving Mr Banks, portrays the creator of Mary Poppins, P L Travers, as stiff-necked.  Some Americans think that if you drink tea from a cup and saucer it automatically follows.  Travers was a bohemian and a fan of the wandering hippie prototype, George Gurdjieff.  The Beatles discovered their equivalent, Mararishi Mahesh Yogi, in the late 60s.  The film, Mary Poppins, was released in 1964.  This has significance.  Mary Poppins appears and tells children and their parents that we live in a crushing conformist world.  In the decade that followed, teenagers argued that the lives of adults were unbearable.  For a brief period, people believed we were obliged to escape the demands of the money making machine.

Mary was adamant.  All we need to do is relax and laugh and we can float up to the ceiling.  Unlike Poppins and the children, the bank manager dies from laughing on the journey, presumably because desperate conformists will not be suitable for the freethinking world that is within our grasp. The wealthy will always be preoccupied with money and have to grab ‘tuppence’, every last penny.  The bank manager is called Mr Dawes but the doors he opens are traps.

The hero of Travers, Gurdjieff, describes bourgeois conformity and consciousness as ‘the waking sleep’.  At the end of the movie, when Mr Banks flies the kite, a marvellous dreamlike pun, he has escaped this waking sleep.  The family will be happy in their small island of financially secure non-conformity.

Much of the mysticism that mars the books was not included in the film.   Travers had script approval, so perhaps she had mellowed by then.  The film critic of Time magazine described the film as ‘impeccably sentimental’.   It is the hippie moments that constitute the acceptable sentimentality and, although the happy ending is not convincing, they make the film enjoyable for children.  As do the animated sequences, which allow an escape from conformity and the demands of powerful oppressors.

What is best about the film, and qualifies it as film noir, is the bleak vision of the fate that awaits ordinary man.  Travers is clear.  No one should endure what the powerful demand.  It crushes the spirit and wastes too many lives.  A similar message exists in A Christmas Carol but Dickens is too savvy to alienate his middle class readers.  Scrooge is presented as an extreme and isolated example.  Mary Poppins is bleaker because it reveals that to survive we all acquire elements of Scrooge.  Travers hated the animation sequences but raised no objections against the chimney sweeps celebrating their temporary freedom on top of the London houses that they clean.  Not only can they dance and sing, they look at St Pauls and claim its grandeur as relevant to their lives.

Travers may have created books that entertain children but she also knew how to nag and the film nags continually at the compromises we make.  The adult who watches Mary Poppins without feeling guilt or regret needs to worry.