Muammar Gaddafi was buried today, rather quietly in a secret desert location.  This is usually the day we honour the dead.  But the consensus has existed for some time.  Gaddafi was one of the bad guys.  Even if we allow for partial Western leaders and their shifting moral judgements we cannot ignore the misdeeds.  The Lockerbie disaster, the killing of PC Yvonne Fletcher and the massacre of 1200 inmates in the Abu Salim prison in Tripoli in 1996 exist as evidence of something beyond normal human failings.  Gaddafi cannot be described as someone who merely lost his way.  Indeed, if there is a purgatory Gaddafi will be experiencing this evening an especially awkward and protracted reception.  All he has in his favour is that his hosts have had plenty of experience of handing similar situations.

This is a long way from Elvis but there are aspects in the nature of Gaddafi that oblige us to remember rock and roll and the nature of its leading characters.   My understanding of the man is limited but his obituaries described someone who was narcissistic, had humble beginnings and was blessed or cursed with a creative temperament.   Such elements are not foreign to rock and roll heroes.

In the case of Gaddafi the characteristics are easily demonstrated.  His narcissism was evident from the expensive and unique wardrobe that followed him everywhere.  Gaddafi may have been hardy as a young soldier but he soon abandoned the simple life.  This was not a man who had a romantic view of backpacking.  One obituary I read described his wardrobe as monstrous.

This reaction is a little extreme and corresponds to the horror of some critics to the white suit of Elvis.  All that needs to be said is that it became excessive and he had poor judgement about how to mitigate the effects of ageing.  (Gadaffi not Elvis.) The humble beginnings of Gaddafi are well documented and they contributed to his fierce will and ambition.  He grew up in a tent in a poor village and was expelled from school for his political activities.  He secured a bloodless revolution in 1969.  Inevitably, his early rebellion was seen as his best period.  After Nasser died Gaddafi would argue for Arab unification with a special self-effacing role for himself as the ‘custodian of Arabism’.  Gaddafi was now a man interested in the larger picture and argued he should be a symbolic figure head.  Handsome when young he thought he had style and felt it should be noted. This also has a familiar ring.  The creative temperament led to extravagant claims such as his boast that he would abolish all hierarchy and create the ultimate democratic utopia.  No power for anyone just the cool at the top smiling approvingly.  The same temperament led to a love of theatre.  Whilst other political leaders have under pressure freed political prisoners, few have reacted like Gaddafi and personally took responsibility for driving the bulldozer that smashed down the walls of the Tripoli prison.  None of the escaping prisoners had any idea how and why they were being released.  Whether they gave the familiar bulldozer driver a friendly wave as they disappeared into freedom has never been recorded.

We may not like Gaddafi and we have an obligation to be horrified by the dark aspects of his regime and the needless suffering and the callous sacrifice of life.  But there is an uncomfortable truth for rock and roll fans.  Muammar Gaddafi always had a certain rock and roll presence.  He had a need for grandeur and his extravagance helped compensate him for being patronised as a Libyan.  This was the Arab nation whose citizens had always been stereotyped as inferior.  Once Gaddafi had power and understood his importance because of the natural resources of his country, he was determined to embarrass and provoke those who thought themselves superior.  He was not a quiet hotel guest and his tents and demands for his entourage did not always enhance the surroundings of the more expensive hotels.  The poor in the Deep South of America produced headstrong musicians who wallowed in the separateness of their region.  Libya produced Gaddafi who was determined others would have to witness what he regarded as his authenticity.  Admittedly, this authenticity was soon surrendered to unjustifiable opulence and luxury.   But, of course, that was part of the gestures.

My comments above may horrify some people.  There was, after all, a time in rock and roll history when the music was believed to be virtuous, to have redemptive properties.  All we needed was to understand the higher essence communicated through simple chords and heartfelt lyrics and locals.  This notion of redemption and integrity has never entirely left rock and roll.  In England, I remember it at its fiercest in the pages of Melody Maker, a paper that dismissed Elvis as a maker of commercial music, and the New Musical Express which is still preaching enlightenment.  Such piety is not new.  I am old but only go back so far yet I do remember reading the literary critic F R Leavis who taught at Cambridge in the last century.  Leavis argued that great literature had a moral life.   I have to admit that for a time I was convinced.  Unfortunately, all my heroes have been exposed and all had a talent that was a consequence of exceptional ability and contradiction.  Rock and roll has its dark side.  Certainly, Elvis would be much diminished without his contradictions and his violent temperament.    But when I think of Gaddafi I am more inclined to remember Little 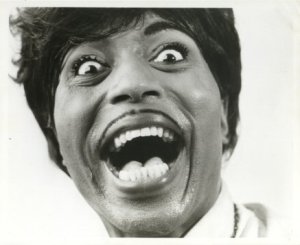 Richard who really did believe he was chosen.  I witnessed this in a concert during an evening when he abandoned the music completely and screamed, ‘Let my people touch me.  The people want to touch me.’  As it happened we did not.  Most of us wanted to hear ‘The Girl Can’t Help It’ which, of course, we never did.   Elvis may have shared the gestures of these meglomaniacs but he was as Greil Marcus argued in ‘Mystery Train’ always an American democrat.  At the time Marcus summarised the message of Elvis by quoting Walt Whitman, ‘No man is greater than me and I am greater than no one.’

And Little Richard did not kill anyone so we can also give him the benefit of the doubt.  Gaddafi did and his talk of utopian democracy and what was probably at one point justified gesture became obliterated by a lust for power.   Rock and roll, though, is more than the quote from Whitman otherwise Leavis, the Melody Maker and the New Musical Express would be jusitified in their narrowness.   We are not obliged to connect Gaddafi to rock music but we will never understand it or Elvis properly if we ignore the gun toting beautiful female Arabian bodyguards that Gaddafi kept in close attendance.   Such sexism can never be defended but I can think of one adolescent rock and roll fan who would have been tempted by the fantasy if he had been given the power and opportunity.  Fortunately, my circumstances were far too modest.