The most tedious characters in Westerns are always the young show off cowboys who prematurely think they are men.   Doris Day plays such a role in ‘Calamity Jane’.   Although more than a match for the men in the town she

makes ridiculous boasts that make her open to mocking.   The difference with Day is that we do not hate her.  The special tonsils help but she is also blessed with natural charm although Doris is not exactly convincing as the tough over-reaching cowboy.  That, though, is part of the appeal of the film.  Whilst complex and thematic, ‘Calamity Jane’ deliberately avoids authenticity.  In the very first scene of the film, when Calamity is singing on top of the stagecoach and the male passengers inside join with a chorus worthy of the Jordanaires, we know we are in the surreal world of the musical.  The Cheyenne are on the warpath but the reason is never explained.  Shooting at white men appears to be something they do to fill the day.  Towards the end of the film, we get an isolated reference to Native American motivation.  ‘This is a beautiful country,’ says Calamity.  ‘No wonder the Indians fight so hard to keep it.’  The liberal sentiment is almost added as an afterthought, something to complement the sub-text of a very subversive Western.

‘Calamity Jane’ is a great film but it is not the best musical made by Doris Day.  This is ‘The Pyjama Game’ in which unbelievably Doris Day plays a trade union leader.  Those really were halcyon days before neo-conservatism.  The plot of ‘Calamity Jane’ echoes ‘Much Ado About Nothing’, and the film is one of many examples that justify the famous claim made by the great film critic, Robin Wood.  He argued that classic Hollywood cinema, the films of Ford, Hawks and Hitchcock, should be compared to Elizabethan drama.  Entertainment made for all but with rich themes that reward analysis and thought.  Indeed, ‘Calamity Jane’ is aware of its Shakespearian roots and has no shame in resurrecting the favourite device of the old master, the letter, which leads to the reconciliation between Calamity and Kate.

Recently, ‘Calamity Jane’ was recreated for the London stage.  An idiot newspaper critic felt that the story felt short of feminist ideals.  She complained that Calamity only finds fulfilment when she puts on a dress.  This is untrue.   Calamity does not prosper in a dress.  She falls in a mud-bank within seconds and although the dress persuades the men at the ball that she is indeed attractive it is there that Calamity disgraces herself.   What is important for Calamity is that she finds a man who will accept her and her unconventional behaviour.  This only happens when Wild Bill Hickock takes her home and they are surrounded by nature and isolated from those

others who insist on how men and women should behave.  He utters the great line, ‘You had to lose tonight or you would never win again.’  The scene is especially significant because normally Day exists in movies as the female reminder, the woman who has to tell the man that he is being silly.  The examples are many, the hysteria of James Garner in ‘Move Over Darling’, the existential negativity of Frank Sinatra in ‘Young At Heart’, the senseless violence of gangster James Cagney in ‘Love Me Or Leave Me’, the bullying of Clark Gable in ‘Teacher’s Pet’ and the self-adoration of Rock Hudson in everything.    But in ‘Calamity Jane’, it is Hickock who exists as the reminder for Calamity.  The genders have been successfully reversed.  The scene is also important for Hickock.  Although the audience has had an inkling, Hickock is surprised to realise that he loves Calamity and more important that she is the woman who will make him happy.   The manufactured glamour of the Chicago showgirl that the rest of the town adores, the female shaped by gender expectations, will deny him the kinship he will find with Calamity.   ‘Secret Love’ is not simply a great song sung brilliantly by Day, it makes clear that both Hickock and Calamity needed to find the love that, in their need to conform, they kept hidden from themselves. The artificiality of gender identity is stressed throughout the film.  The male owner of the saloon, ‘The Golden Garter’, is called Millie.  Francis Fryer, because he is called Francis and an actor from Chicago, is assumed to be a woman and is forced to perform as a woman on the stage at ‘The Golden Garter’.  And disturbingly the deceit works until his wig his lifted from his head by an extended trombone.  Kate, who is the 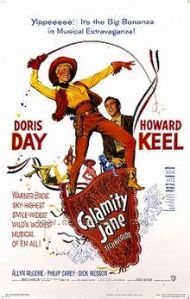 Chicago showgirl and has the costumes and showgirl grooming that appears to appeal to the cowboys more than the actual woman, is actually a fraud.  Before her appearance in Deadwood, she was merely the maid of a showgirl.  Hickock is obliged to dress as a Sioux squaw after losing a bet with Calamity and is only noticed when the baby he is holding begins to cry.  The theme of the identity is referred to in the song, ‘Keep It Under Your Hat’.  This is what happens to who we really are.  It has to stay hidden.  With all this confusion, no wonder we even hide our loves from ourselves.  Neither it is a surprise that Hickock only sings about being in love with Kate when he is looking at a painting, a false image.

Calamity does not become the woman fashioned by convention but she does abandon the excesses of the male ego that she foolishly adopted in her need to reject femininity.  The Calamity that appears after the scene with Hickock returns to buckskins immediately.  They are smarter and a more flattering blush suede but why not because Calamity has found her true self.  She is bound to look good.  But this Calamity is not what the men have previously insisted upon.  She will ride at breakneck speed through a challenging landscape to stop Kate from leaving Deadwood.

The same dopey newspaper critic decried a scene, where Calamity and Kate, her friend from Chicago, tidy up their log cabin.  The critic stated that it suggested that women are happy doing housework.  Again, this is not true.  Calamity and Kate feminise the cabin but they do a lot more than routine housework.  They refurbish the cabin so it is habitable.  This includes painting the cabin and putting in windows.  They redefine the work and themselves so they exist beyond male expectations of women.

All the songs in the film are hummable but four define the themes.  ‘Keep It Under your Hat’ and ‘Secret Love’ have already been mentioned.  ‘I Could Do Without You’, though, is especially clever and refers to what both genders often wonder which is that it might be better if they existed alone.  Hickock and Calamity sing it early in the film but the plot proves what history has demonstrated and Shakespeare understood.   The genders will always need one another.  Kate and Calamity sing ‘A Woman’s Touch’ when they refurbish the cabin and unless you are a thick newspaper critic you will realise it hints at potential rather than place.   If these songs are important thematically, the best songs in the film are merely great.  There was a time when the opening scene, ‘Deadwood Stage’, rivalled ‘Jailhouse Rock’ as most requested film clip on British television.  Day is energetic and magnificent.   To be appreciated properly, the studio recording of ‘The Black Hills Of Dakota,’ needs to be heard.  The moment when Day jumps half an octave to sing the syllable ‘tree’ in ‘country’ is simply exquisite.

If you want to read more about American culture click here.

If you want to read about what happened to the author in Brazil click here.

If you want to read about Frankenstein click here.

If you want read about vampires, strange happenings in Argentina and what happens when the author challenges his political enemies keep reading this blog for soon to be released news.